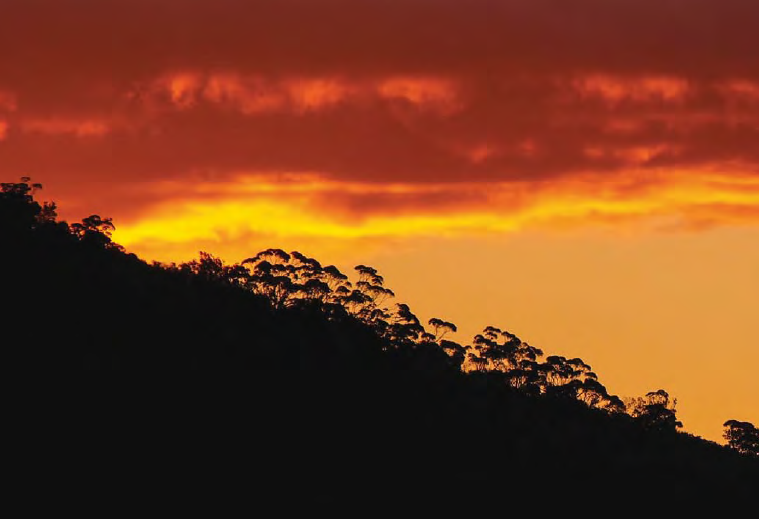 The Helena and Aurora Range is not a place you can simply type into Google Maps or your GPS and head on out to. It’s a treasure enjoyed mostly by people from nearby towns and those who’ve been lucky to hear through the grapevine of its ancient beauty. Which is a shame as the stunning range is actually in Perth’s backyard and a place to be enjoyed by all.

As a traveller that normally sticks to the coastline because of my love for surfing and diving the Helena and Aurora Range is not normally a destination I would go out of my way to visit. However, as a campaigner at The Wilderness Society, an organisation that has been working to protect this area and the surrounding Great Western Woodlands for years, I headed inland to get acquainted with the landscape and experience it for myself. Like most that visit the range, I was immediately captivated and have been back repeatedly since.

Whether you’re passionate about your outdoor activities – from birdwatching to geology, from photography to camping; whether you’re a youthful and adventurous spirit or simply wanting to take it a bit slower and get away from it all – the Helena and Aurora Range will find its way to captivate you too.

Since time immemorial, the Helena Aurora Range has been part of the country of the Kalamaia Kapurn traditional owners who call it Bungalbin. Helena and Aurora Range is considered to have the highest conservation value among the Banded Iron Formation (BIF) ranges in the central Yilgarn; recently quoted by the Environmental Protection Authority as being “one of the more significant biodiversity assets in WA”. 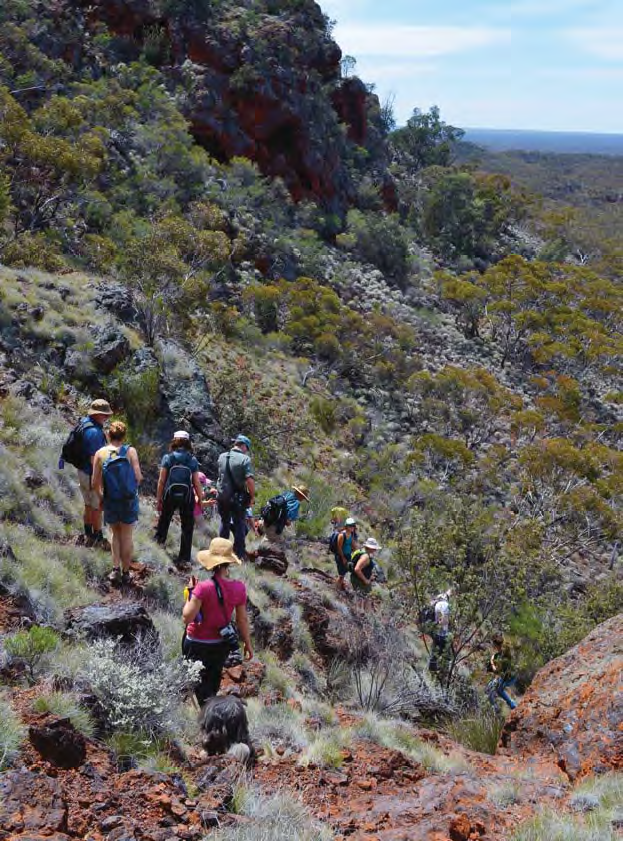 After crossing the Rabbit Proof Fence or State Barrier Fence as it is now known, built in the early 1900s as a way to exclude vermin from farmland, the landscape starts to change. You then find yourself in the Goldfields region, or the Great Western Woodlands, as it’s more affectionately known.

The Great Western Woodlands (GWW) is the largest intact temperate woodland left on earth; at around 16 million hectares it is almost three times the size of Tasmania. This special place is home to a remarkable richness and diversity of plant life, due to its ancient heritage. There are more plant species in the GWW than in the whole of Canada. Further, 30 percent of Australia’s gumtree species are found here making it the eucalypt heartland of Australia. 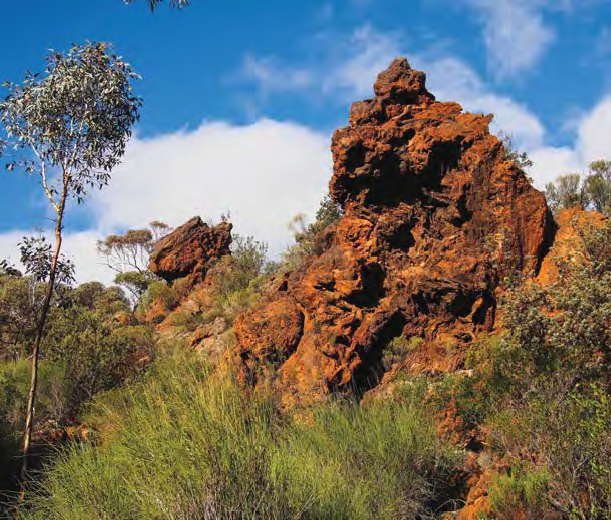 Unfortunately, the GWW is at risk of suffering a ‘death by a thousand cuts’ and this becomes quickly apparent as you pull into the mining town of Southern Cross. The Goldfields’ history is deeply rooted in mining from the original gold-rush, and the geological foundations of the region (the Yilgarn Craton) are the reason this area is known today as Australia's premier mineral province; with extraction of nickel, tantalum, iron ore, copper, zinc, lead, platinum, vanadium and hard-rock titanium occurring throughout. Southern Cross has a few traditional Australian  hotels and is a great place to stock up on supplies before heading off into the wilderness.

From Southern Cross you drive north through the mining ‘town’ of Koolyanobbing, cross some haul roads and make your way along a parallel dirt track towards Mt. Dimer. Note: when we say town, we mean a few demountables and the graphic remnants of a Banded Ironstone Formation (BIF) range that sadly once was. A clear example of how BIF ranges in the region are being taken down, one by one. The road from there to Helena and Aurora Range is fairly dusty and if it’s dry and you have good suspension, it’ll make for an easy drive. If it’s wet, however, get ready to activate your 4WD and tighten your seatbelt.

After travelling about 45km north from Koolyanobbing (about an hour on the dirt track) you’ll finally see the magnificence that is Helena and Aurora Range rise from the woodlands. It doesn’t matter what time of day, be it sunset with boastful shadows or early morning with full sun or even cloudy and contrasted against the overcast skies, the range appears victoriously in front of you. Like an inland island, emerging from the sea of the sparse eucalypt woodlands.

The range is about 2.6 billion years old and has subsequently evolved into a haven for flora and fauna found nowhere else in the world. Its height at 690m creates its own micro-climate and the vegetation resembles that of which exists in wetter climbs. It is one of the more spectacular Banded Ironstone Formations in Western Australia, with extremely high-grade iron ore banded between rich red jasperlite and veins of quartz. 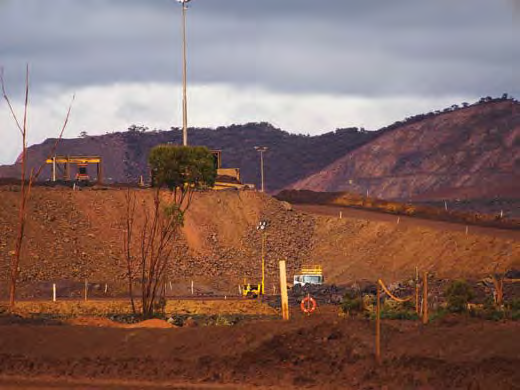 You can camp on the flats among the inland wandoos (Eucalyptus capillosa) surrounding the range; there is a track that circles it. Or, for the game driver, there is a steep 4WD track up the saddle of the dragon, as it’s sometimes called from its dragon-like shape when seen from above, which takes you to a somewhat established camping ground. 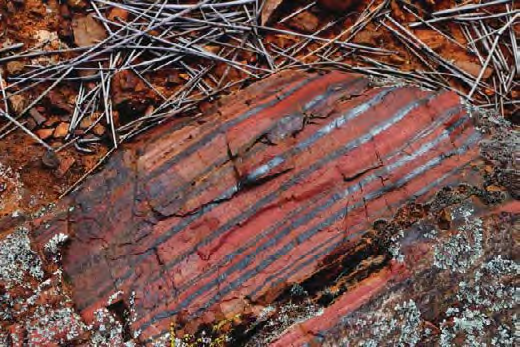 There are no amenities or phone service, and if you are travelling in convoy UHF radios are recommended. You must come prepared with ample food, water and first aid supplies. More often than not, you will be the only one at the range. Not all GPSs work out there, so we would also recommend you invest in traditional paper maps to be on the safe side. 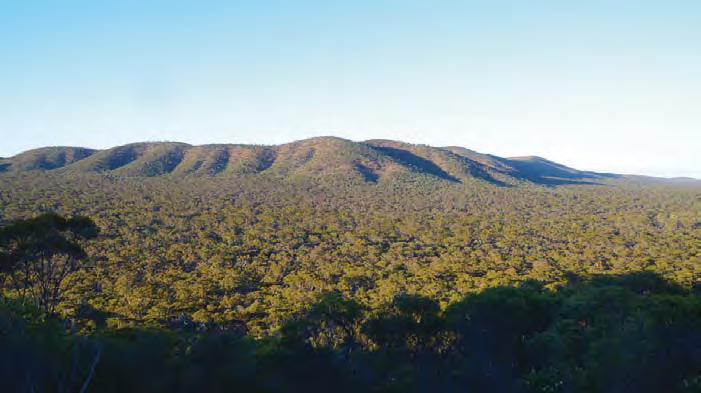 The Helena and Aurora Range from afar

A trip to Helena and Aurora Range is a trip to serious immersion in nature. There are various hiking paths accessible from all sides of the range – some steeper and more rugged than others, with hidden caves for refuge. However, due to the sparseness of the vegetation and emerged rock formations, you can make your own tracks and routes for exploration fairly easily without doing damage to the fl ora, fauna and general integrity of the range.

On our last trip we had a diverse age group, from 3-80 years old, and all were able to enjoy the various hiking tracks. 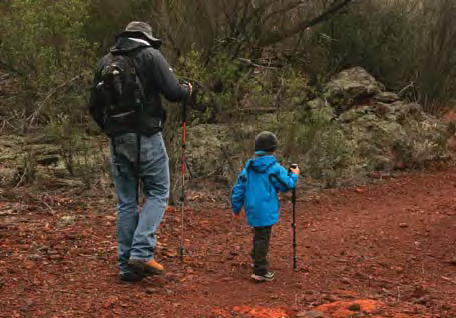 A hiker and his grandson set out

If you have an appreciation for native vegetation you will be in heaven at the Helena and Aurora Range. Sandalwood, used for its oils or to add a unique flavour to campfire cooked food, and quandongs,  used for eating raw or turning into jam, are abundant in the region. Most notably, there are five flora species found only on this particular range and are absolutely stunning in beauty.

It’s for all these reasons that there have been several decades of repeated recommendations from scientists, government agencies and conservation organisations for the full protection of the Helena and Aurora Range.

However, with many ranges in the area already destroyed by mining, the Helena and Aurora Range, the jewel in the crown of the Great Western Woodlands, is the immediate focus of local and national environmental groups to ensure this protection is finally secured.

A National Park Proposal, recommending the area for ‘A’ Class Nature Reserve status, was recently launched by The Wilderness Society, the Wildflower Society WA and the  Helena and Aurora Range Advocates, and is gaining much public and political momentum.

Despite calls for the range’s protection, the area is currently under threat from suffering the same fate as many of its neighbouring BIF ranges. There are current mining tenements over the range, with the threat of a proposal to mine the range being submitted by the end of the year. The figures stack up so that the total iron ore available in the Helena and Aurora Range amounts to the equivalent of a few weeks production from mines in the Pilbara. Needless to say, those advocating for protection are wondering – why destroy something so ancient and unique for such a trifling amount of ore?

Regardless of the fate of the Helena and Aurora Range, it is clear that it truly is a remarkable Australian biodiversity asset and a hidden gem that has left all who have had the opportunity to enjoy it with a greater connection to the country and our ancient natural history.

But I guess if you’re anything like I was before I ventured out to see what all the fuss was about, you’ll just have to experience the magnificence of the Helena and Aurora Range for yourself, before it’s too late.

The Helena and Aurora Range is approximately two hours north-east of Southern Cross, about 500km inland from Perth, WA. Four-wheel drive is required for wet season travel.Visitors must be fully self-sufficient in terms of food, water and first aid as there are no amenities. The closest town is Southern Cross which has accommodation, camping, fuel and supplies. You can also approach the range from the north via Mukinbudin, for a greater four-wheel drive adventure.

The Great Eastern Highway would only be closed in case of an emergency such as a bushfire or flood (both uncommon for the area). From Southern Cross, the journey involves mining haul roads, negotiating mine sites and dirt tracks.