Features Reviews Technology Cooking Destinations Stories Fishing
Can We Do More With Less?
Words and Images by: KEA 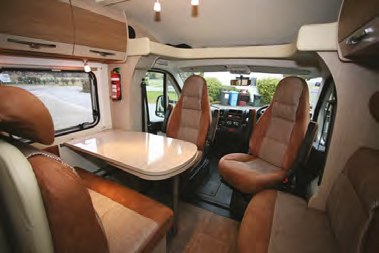 Those who have been CMCA members for a long time might well recall the club’s earlier times when the majority of members either owned campervans or small coachbuilt motorhomes. Large A class motorhomes and converted coaches were somewhat rare. Of course those earlier campervan/motorhomes carried all the basics but were somewhat less sophisticated than what is available today. What has changed the average length of the coachbuilt motorhomes more than anything was the desire for a fixed floor-level bed and, more recently, a larger bathroom area.

From a rental operator’s point of view, the preference shift from a Luton bed to a lower bed has caused us a few headaches mostly because many of our rental layouts were very much based around having a bed above the cab and in the larger motorhomes, using dinettes and lounges that can also be made up into beds. All that gave us a very flexible layout but it was less attractive to many private buyers.

Just stepping outside Australia and taking a brief world view, there have been some quite different approaches to motorhome layout designs. For the most part, the North Americans, in their desire for more features simply created space by adding more length (and hence weight) to their motorhomes. The British

and Europeans took a different approach mostly because of road width limitations and generally seem to use space more effectively. Australian and New Zealand manufacturers took a middle road which, of course, has its pluses and minuses.

Until the latter part of 2008, motorhomes were in the main becoming longer and the motorhome market generally was quite strong. After the Global Financial Crisis (GFC), things changed somewhat and while the rest of the market still moved along, the A class market in particular has never been the same in Australia.

The challenge for many RV manufacturers has been to give travellers all the features they want but without increasing the weight too much or changing the external dimensions – in reality the length, because the width is fixed by the relevant Australian Design Rules (ADRs). 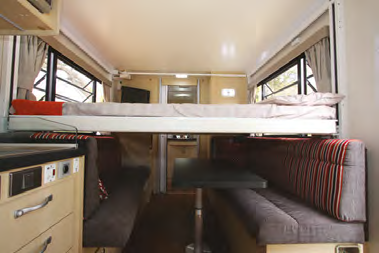 One quite obvious way has been the introduction of slide-outs, which improve the internal living area considerably without changing the external dimensions – just the overall weight. Another feature that has become quite popular is the electrically driven elevating bed. This is quite a clever adaption of the Luton bed – out of the way when not needed but much more readily accessible.

A slightly less obvious shift that we have noticed has been a better use of space. A good example being drawers – they might have less capacity than an open space but when used in kitchen benches, below seats or under beds, they are very efficient storage devices. Island and single beds are often set at quite a low height but having a bed raised up slightly does mean there is more storage space underneath. Often the air space above a bed is used for overhead lockers but we’ve seen a design where a half height wardrobe used the air space at the foot of a single bed.

LED lights might not sound like much of a space-saving device but they run cooler than conventional incandescent or halogen fittings and use considerably less power.

Here’s a bit of trivia for you, the Sydney Opera House has recently undergone a major lighting upgrade by installing LED fittings throughout. It’s estimated that will cut the Opera House power use by 75 percent and because there will be much less heating effect from the lights, about four tonnes of air conditioning ducting can be removed.

You’ll have to down-scale a bit for a motorhome but you get the idea. For us, LEDs, if used with other energy saving devices, will mean less battery capacity (and therefore weight) is required. We’re not quite there yet mostly because of up-front costs, but high-capacity lithium batteries will definitely be good to reduce the weight factor. 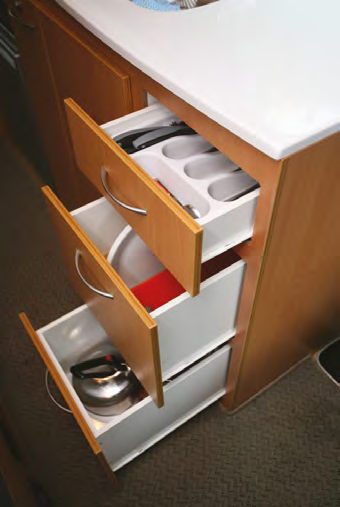 Of course, we should not forget the base vehicle manufacturers either. Manufacturers like Mercedes-Benz, Volkswagen, which we at KEA use, as well as Fiat and Iveco, all fit features like swivelling cab seats, which really made life much easier for the motorhome manufacturers. The swivelling seats can be readily adapted into the motorhome layout, thus saving weight and precious metres of length, but still offering a comfortable living style.

All that is well and good but given the environmentally challenged world we live in, the onus is on us all to consider how we can enjoy the motorhome lifestyle without getting carried away with all those extra goodies that manufacturers like to tempt us with!