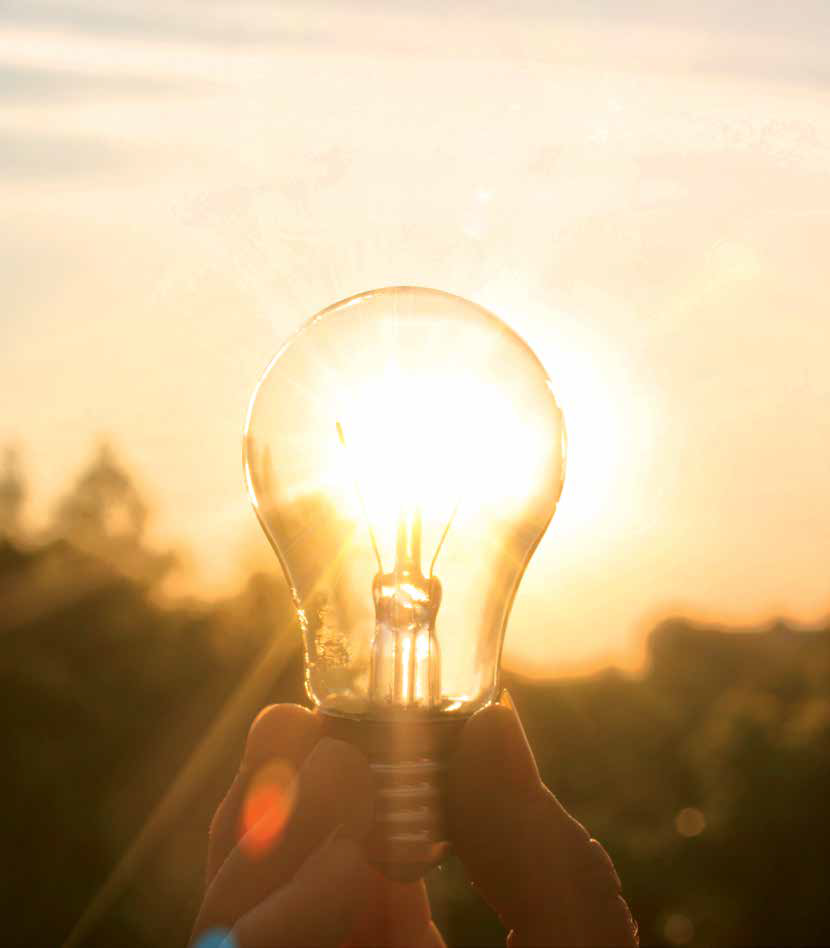 When it comes to innovation, it’s often the simple ideas that count. As Aussie musician Paul Kelly famously sang: “From little things, big things grow.” His sage observation is very poignant: it’s the single notion that all great leaps forward – whether in social justice, technology or our travelling lifestyles – begin with a small idea.

Innovation is often described as a solution to a problem, and this is certainly true in the RV industry. Need more power when offroading? How about we harness the might of the sun. Need a smoother and safer towing experience? A weight distribution hitch will do the trick.

Peter Smith, innovation specialist, mentor and judge of the upcoming 2018 BMPRO Innovation Award, says anyone can come up with an innovative idea if they are inclined to think creatively about a problem.

“It’s quite often people who have no manufacturing ability at all who have the ideas,” he tells The Wanderer. “All you need is to brainstorm those ideas and then you find someone who can make it happen with the technology. That’s what we try to get through to the young people of today, that spirit of entrepreneurialism.” 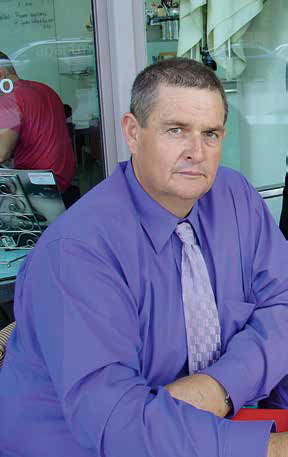 Technology is important to create the final product, but it does not always need to be at the centre of the innovation process, says Louise Bayliss, CEO of BMPRO and Innovation Award judge.

“Technology now allows us to put some ideas into reality faster and more cost effectively.”

Problems are usually solved by those closest to them, and who better to come up with innovative ways to make life on the road easier than those who use caravans and motorhomes? Smith says RV owners are often the ‘brains trust’ if you will, behind RV companies’ upgrades and improvements.

“The RV industry is so competitive that most of the improvements in their models is usually by customer feedback, so customers saying  this is not working or that is not working,” he says.

“When we are talking to the actual designers in these companies, that is their start point.”

Of course, not every idea is completely unique. Great ideas are often an extension of an existing concept, or a step beyond a product already on the market.

“Sometimes the word ‘innovation’ conjures up that it has to be completely different,” Bayliss says.

“Innovation starts with small and new ideas applied to an existing product or service, typically seeing a different way or applying an idea from a different industry that are some of today’s ground breaking commercial ideas.”

Turning a good idea into a viable commercial product is a lengthy process which requires a fair amount of investment and commitment to make it happen. As a mentor, Smith says he has been a part of many amazing ideas which have come to fruition either through crowdfunding or venture capital investment, and there is one common denominator.

“The common thread that we have seen with all the great inventions that we have been involved with is passion – it is definitely the passion that makes people not give up,” he says. 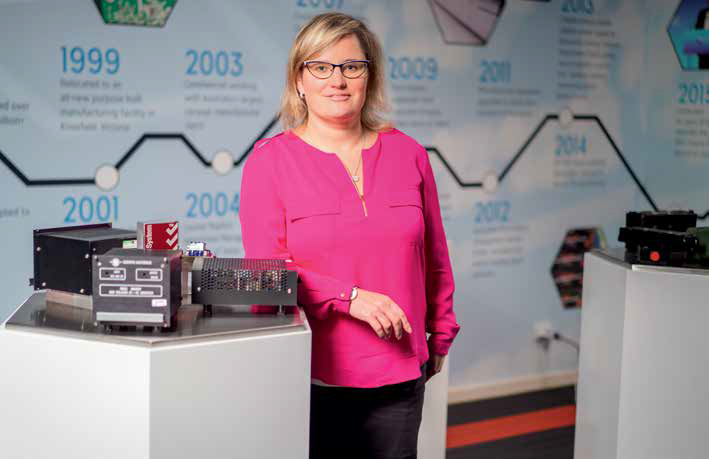 Smith has been impressed with simple ideas that RV owners have devised, long before you could buy something similar in a store.

“I have seen a lot of things while motorhoming that are now commercialised, such as the ‘pig barbecue’, amazing compact barbecues that pack right down to nothing for roasting meat on a spit,” he says. “For many years before there were those sorts of things to buy on the marketplace, there were backyarders making their own.

Former Editor of The Wanderer Ali Millar has met some amazing people on the road who are constantly innovating with their setup. Often this is the result of a tight budget, but also to solve a kink with their rig. Here, she presents a few of those for some inspiration.

Kim and Paul from Bacchus Marsh, VIC, like to keep things simple. In line with this ethos, when travelling in their Blue Sky caravan they always throw in their recycled milk crate, which serves multiple uses, saving on valuable packing space. The crate is used as a table under the awning, an extra seat around the campfire, a step to reach the car roof and a storage box on the road. They use cable ties to attach a square of thick rubber matting to the base of the crate – an oh-so simple and supercheap solution that makes it more comfortable to sit on and provides a more solid base for their drinks when used as a table. 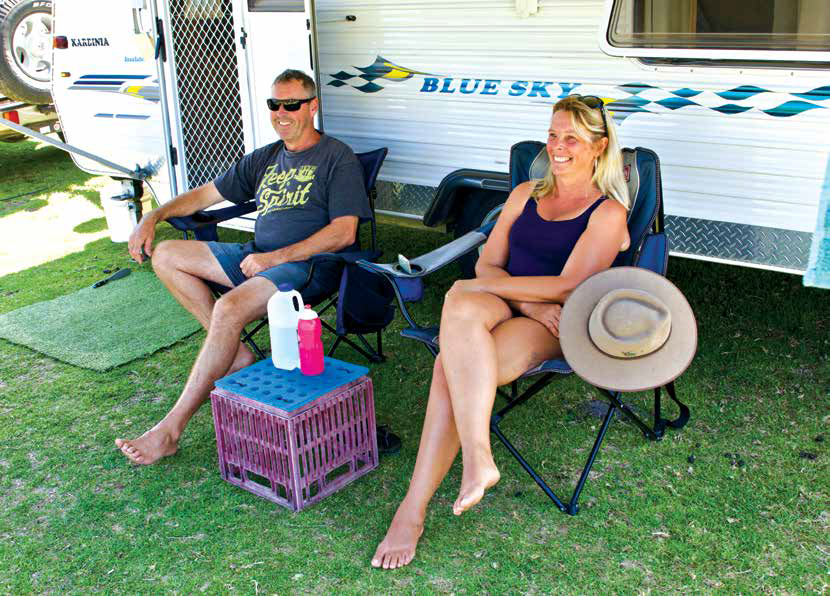 Kim and Paul from Bacchus Marsh, VIC, take a break from the road and use their multi-purpose milk crate as a handy table

Kim and Paul were sick of their sheets ending up in a pile at the top of their bed whenever they lifted the mattress to access the under-bed storage or travelled to a new camp, and their solution is straightforward yet ingenious. They fasten an occy strap diagonally across either end of their mattress, hooked in place to the bars underneath the bed base. This holds the sheets in place at all times, including while they sleep. Problem solved! 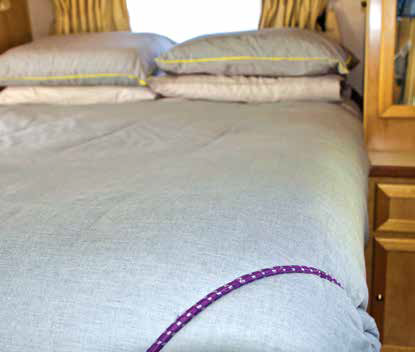 Stuck for a good way to stop your camp chairs sliding about when stowed? David Smith from Geelong, VIC, has a solution. David mounted two short off-cuts of poly pipe with caps on one end to the rear door of his Tommy camper. With the capped end at the bottom, the poly pipe then acts as a base for the chair legs to neatly slot into while a bungee cord is looped across the top of the chairs and attaches to rope buttons to keep them in place.

Sure, you’ve got a light on the outside of your van, but what if you’re sitting around the fire or want some light further away from your rig? Create your own portable light with a 12V LED downlight, a length of garden lighting cable (10m is about right, but go for longer if you want more distance), a switch, a 12V cigarette lighter plug and a soldering iron. Solder the plug and the downlight onto the cable and install the switch. An empty yoghurt container makes a great shade to better disperse the light – just cut a hole in the lid and thread through the cable.

You’ve arrived at camp and discovered a creek stocked with yabbies but you’ve got nothing to catch them with. Disaster? Not at all! Look around your camp – you’ll be amazed at what you can pull together. For this net, Glenn Wardle used the shaft of the collapsible shovel as a handle, the arms of the jaffle iron as the frame for the net, a mesh fly net to trap the yabbies and lengths of cord to tie it all together. You’ll be happy to know he successfully brought in a haul. 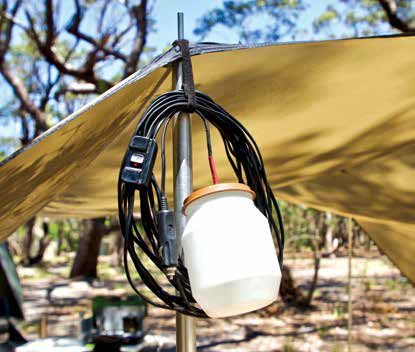 The last thing you want as you hook up a fish is to lose your sunglasses into the water in your excitement. Grab a short piece of thin cord or twine and knot it onto either arm of your sunnies and they won’t be going anywhere. 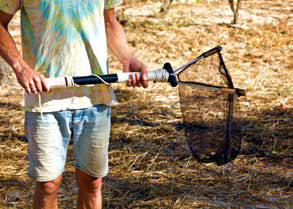