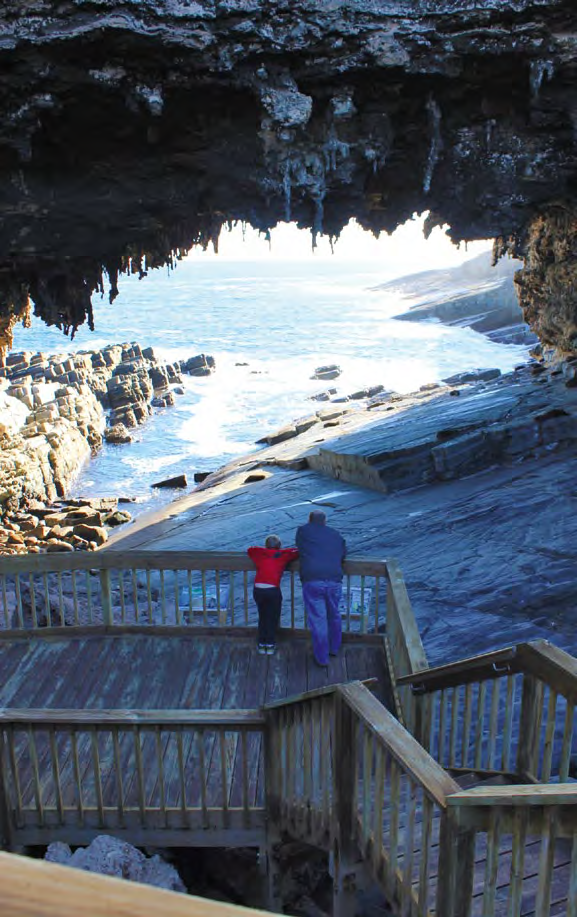 Kangaroo Island is a place worth visiting at any time of the year, but it is a truly spectacular place in winter. During this time of year the Island is lush and green and with fewer tourists, the feel of the place is even more relaxed than usual. And while the weather is cool, it is simply an excuse to wear the winter coat and stoke the open fire at night.

Our trip was a delight. I can’t remember a more relaxing and interesting place to go. A couple of days on the Island and you feel completely refreshed. And while the Island is large (about 150 kilometres across and 50 to 90 kilometres wide), it is compact enough to traverse easily and the attractions are very easy to get to.

We based ourselves on the southwest coast at Hanson Bay. It is hard to imagine a more spectacular coastline with the Southern Ocean at our doorstep. Sitting on the porch our friendly and fat wallabies never stopped their mournful, hungry looks. The possums would turn up in the evening, just as we would wander down to the beach to hang out with the small penguin colony on the rocks. Then we would track back to the cabin to stoke up the fire before the cold became too much.

There are many accommodation options from resorts to camping and caravan alternatives. Farm stays and a variety of B&Bs are great alternatives as well.

My lasting impression of Kangaroo Island is a place lost in time, a much simpler time when rural economies ruled and the bush coexisted with the small population base. The modern world has intruded to some extent. It has to with almost 200,000 tourists a year. But somehow Kangaroo Island or KI (as the locals call it) manages to merge the economic realities of today with a quaintness that is almost unique in Australia. 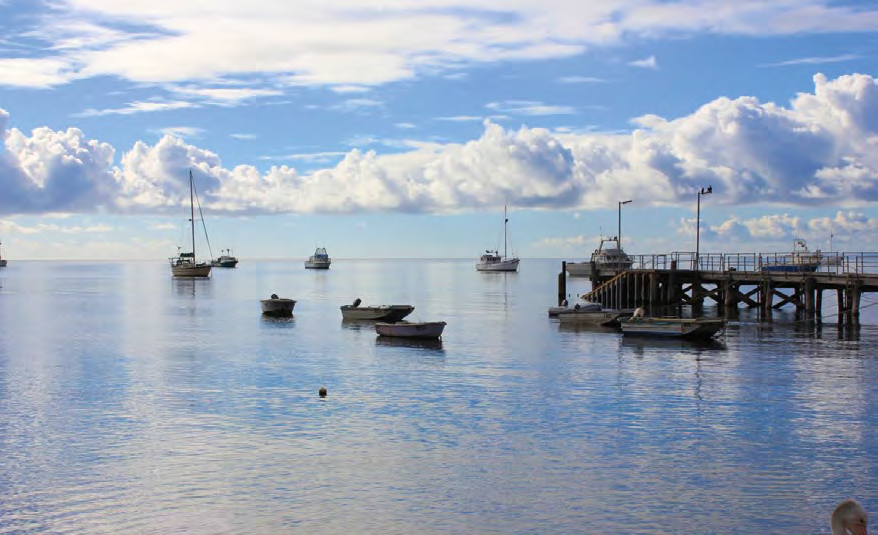 The foreshore at Kingscote, picture by Glen Klatovsky

You can learn more about Kangaroo Island and the natural values it has on The Wilderness Society website – www.wilderness.org.au

History of the Island

The Island has a long Aboriginal history, probably stretching back more than 20,000 years, but this entered a terminal stage at the end of the last Ice Age as the land bridge to the mainland disappeared. The Indigenous population seems to have lasted until about 2,300 years ago, although there is some evidence of use of the Island for resources from populations in Tasmania and the mainland after this.

Kangaroo Island also has a rich European history. First named by Matthew Flinders in 1802, it was a seal-hunting base until official settlement in 1836. The capital, Kingscote, was the first major settlement in South Australia and remains the largest town on the Island. Agricultural development was largely confined to the eastern half of the island until the mid-20th century when soldier settlement farms were established in the central and western parts of the Island.

The spectacular coastline proved to be a very dangerous threat to shipping. The worst shipwreck occurred in 1899 when the Loch Sloy went down and 31 drowned. This has left a legacy of gorgeous lighthouses around the Island that are still functional. 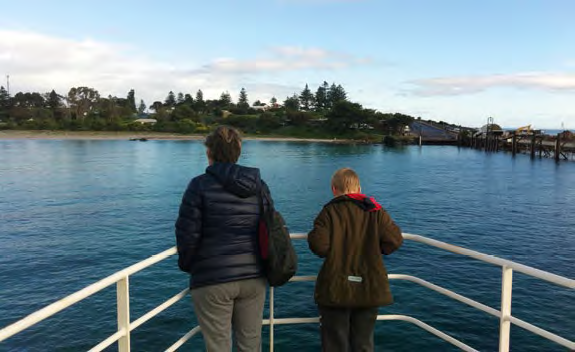 On the ferry about to land at Penneshaw, picture by Glen Klatovsky

Flinders Chase National Park lies at the western end of the Island and provides some of the most stunning views of the coastline, the Southern Ocean, unique rock formations and offers interactions with the wildlife.

Two of the major attractions are Admiral’s Arch and Remarkable Rocks. Admiral’s Arch is located at Cape du Couedic in Flinders Chase National Park. From the car park which sits next to an historic lighthouse, you get to traipse down a boardwalk around a cliff face which wends its way to a spectacular natural rock arch sculpted by the wind and the sea over thousands of years.

From the cliff tops all the way down to the Arch you get to see scores of New Zealand fur seals on the rock platforms. After feeding at sea, these brown seals return to these platforms to rest. While the smell is less than endearing it is great fun watching the youngsters barking at  their elders and these large beasts rolling around in the sun.

Not too far away are the Remarkable Rocks, and they are remarkable. Created over 500 million years, these granite outcroppings sit on the edge of cliffs towering above the wild ocean below. The views from the rocks along the coastline are something to behold and add to this unique formation. www.environment.sa.gov.au/parks/Find_a_Park/Browse_by_region/Kangaroo_Island/Flinders_Chase 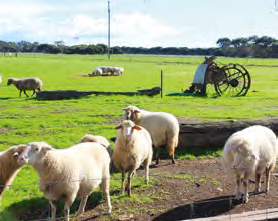 A sheep dairy on Kangaroo Island, picture by Cherilyn Ribbons

When Sydney University ranked the beach at Vivonne Bay as the best in Australia it would have taken most people by surprise. As the only safe harbour on the south coast of KI, it is pristine, remote and truly beautiful. I am not sure winter is the ideal time to go for a dip in the Southern Ocean, so maybe a bit of fishing is a betteroption. www.southaustralia.com/info.aspx?id=9005731 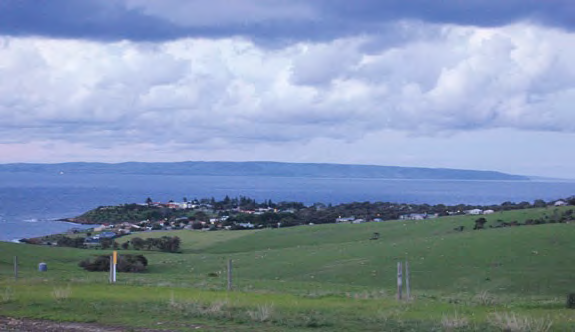 View down to Penneshaw awaiting the Ferry, picture by Glen Klatovsky

One of the major tourism attractions on the Island, Seal Bay Conservation Park offers the best sea lion experience you could imagine. Seal Bay is home to about 5% of the world’s population of Australian sea lions. Having the expert tour guide adds hugely to the tour and I was fascinated to hear about the biology, the history and the personalities. If you can go for the Sunset Tour. www.environment.sa.gov.au/sealbay/Home

The Conservation Park at Kelly Hill is lovely, but the truly extraordinary experience here is the caves. It is definitely worth taking the tour and  experiencing the limestone formations. There is the option of taking on the Adventure Caving Tour where you get to crawl through the smaller caverns and look at some of the fossil record. www.southaustralia.com/info.aspx?id=9000958 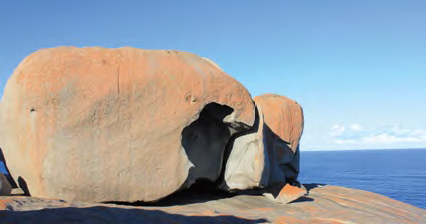 The verdant grazing properties in winter are dotted with sheep and cattle, while the growing wine making industry has left its mark with vines dotted around the landscape. This is an Island with a vibrant rural sector and there are some exceptional products that can be sampled on site or in the towns.

Many property owners have added small tourism operations to their enterprise. We bought some exceptional sheep yoghurt and cheese from a working sheep dairy, and then indulged ourselves with produce from a honey farm down the road. Within a few kilometres from here is the only eucalyptus distillery in SA. The great thing about these little operators is that they are simple and small. These are still farms, runs by farmers and have not become ‘theme parks’.

We had the privilege of spending a day on a friend’s farm covering several hundred acres, the property has a mix of sheep grazing and some horticulture. They are even thinking of sticking a small vineyard on the property. The farm is surrounded by some of the 20,000 hectares of eucalyptus plantations that have become the victim of the failed Managed Investment Schemes. This is one of the major issues facing the Island and there seem to be as many plans for what to do as people who live on the Island.

The self-drive option is fantastic. There is a ferry that crosses from Cape Jervis on the Fleurieu Peninsula, a hundred kilometres south of Adelaide, to Penneshaw on the northeast coast of the Island. Most of the roads on Kangaroo Island are two wheel drive friendly. Even the unsealed roads proved to be well maintained and safe in our hatchback, despite significant rains the previous week.

Driving from Adelaide to the ferry terminal you get to see a wonderful mix of picturesque towns, verdant farms overlooking the ocean and some beautiful natural landscapes. This is a worthy entrée to the delights of the Island.

The ferry crosses to the Island at least four times a day. The crossing takes about 45 minutes. Be warned, the conditions can be uncomfortable, so if you are prone to seasickness take some medication beforehand. The ferry holds approximately 50 vehicles and bookings are essential. The only operator is Sea Link and theycan be contacted on 13 13 01 or www.sealink.com.au

Flights are also available to Kangaroo Island. Rex Airlines is the sole operator and has regular flights from Adelaide. The airport is about 13 minutes from Kingscote. Reservations: 13 17 13 or www.regionalexpress.com.au

Car rentals should be pre-booked. The best place to startorganising your trip is: www.tourkangarooisland.com.au