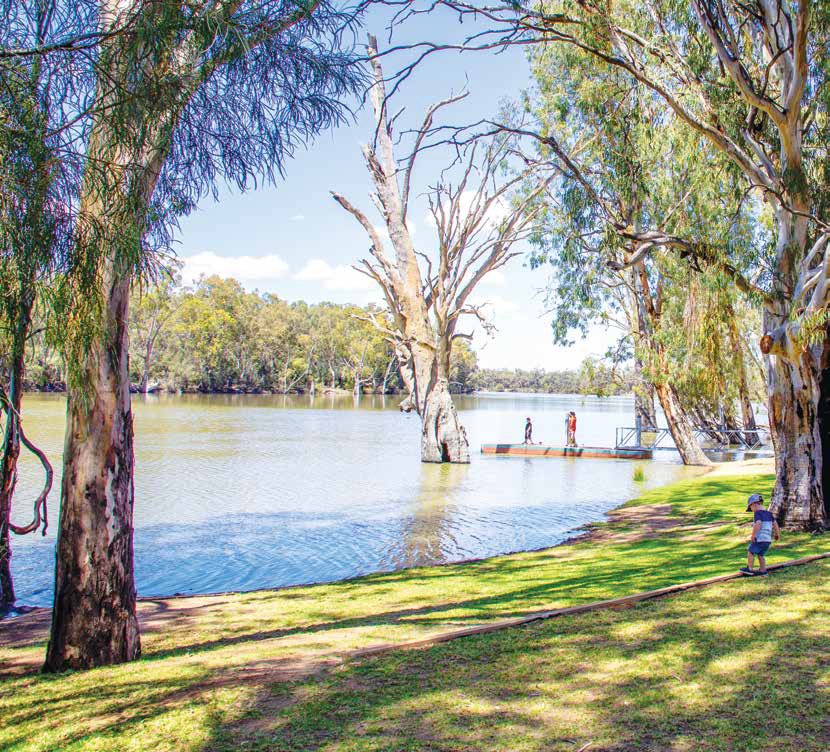 Sipping a cold wine or beer and eating homemade salami while sitting among the river red gums on the banks of the majestic Murray River sounds too good to be true, right?

Making it happen is easy – just pack your RV and head to Euston, NSW, for the Great Murray River Salami Festival to be held at the Euston Club Resort on Saturday 12 November from 10am-4pm. Entry is free.

Historic Euston is located on the NSW side of the Murray River, across the water from Robinvale, Victoria, and not far from the regional centre of Mildura.

After a two-year COVID enforced hiatus, the Festival is back and promises to be bigger and better than before, celebrating the region’s multicultural heritage with salami-making demonstrations and competition, food, drink and market stalls, riverfront entertainment and children’s activities.

While vendors are still being finalised, you can expect a range of drink and food options to be available including, of course, salami vendors selling their delicious small goods.

Local market vendors will be selling a wide a range of items such as crafts, clothing, jewellery, plants and garden ornaments, hair accessories, art, balloons, essentials oils, candles, fruit and vegetables and more. 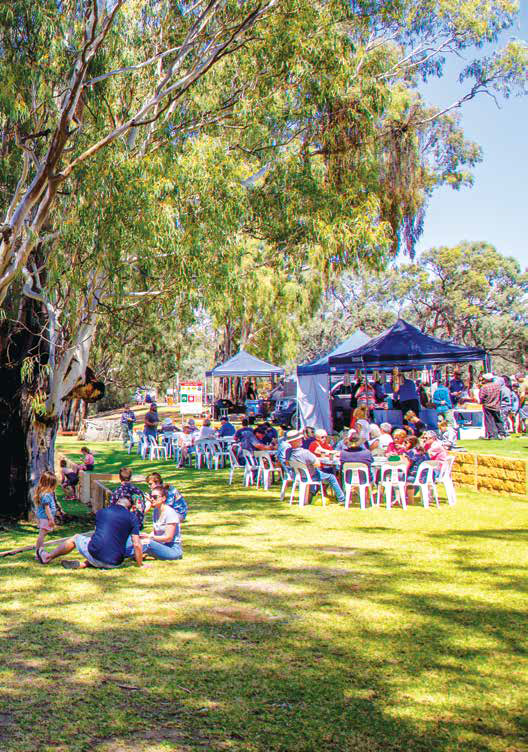 Master salami-maker and passionate foodie James Mele from The Meat Room, is the head judge in this year’s Great Murray River Best Salami competition. He will join a panel of judges who will taste and deliberate over the entries from 8am-10am in the Euston Club Resort function room. In 2018, 24 salamis were entered in the competition and this number swelled to 68 different salamis entered in 2019. Event organisers hope this number increases for 2022.

James is passionate about meat and loves to travel, meeting farmers, producers, and fellow foodies. He will also be demonstrating his salami-making skills.

He is fanatical about traditional Italian food and has spent many hours with his extended family learning the art of salami and sausage making as well mastering passata, pizza, and winemaking. James constantly seeks to master and build on his skills, whilst also striving to innovate. He frequently travels both locally and internationally to Italian food festivals to uncover new ways of preserving, preparing, and cooking.

Based in Kilmore, Victoria, The Meat Room offers salami and sausage-making classes – book online early as they sell out quickly. If you prefer to make salami at home, you can purchase all you need through the online store. 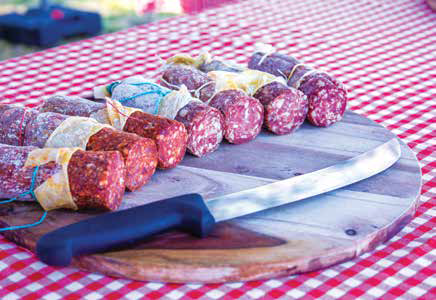 It’s your chance to taste a variety of salami

The history of salami in Australia dates back to the era post-World War II when more than two million immigrants, mostly from the United Kingdom and Europe, landed on Australia’s shores as part of our country’s newfound immigration policies.

Many Australian-Italian families still gather during the winter months for salami-making days; There is plenty to see Arts and crafts are also on display Taste the local wares hanging their fresh salamis in garages and cool, dry spaces of their homes to dry.

These days, homemade salami isn't an activity just for Italian families, with many businesses selling specialist equipment to a new wave of salami makers looking to try their hand at the homemade stuff.

There is plenty to see

If you think you have what it takes to make the perfect salami and you wish to enter in the Great Murray River Salami Competition, download an entry form from the website or pick one up from the Euston Club Resort Reception.

You can enter as a team or an individual. Please be sure to include a description of your salami and ingredients. Under 18s are welcome to enter but they must have the permission of a parent/guardian.

The important part! Deliver your 150 grams of salami or other cured/smoked meat to the Euston Club Resort by 5pm on Friday 11 November 2022. Please note that the weight of your entry is taken from the finished product before being cryovaced, not the weight of raw ingredients. The judging will commence at 8am on Saturday 12 November 2022 in the Euston Club Resort Function Room and everyone is welcome to attend while the judges taste and score the entered salamis. 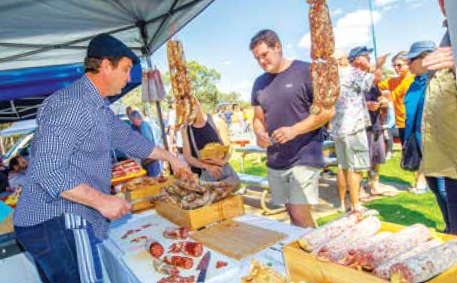 The Euston Club Resort sits on five acres of grounds and facilities nestled among the river red gums on the banks of the mighty Murray River, offering both visitors and locals a host of great options for accommodation, entertainment and business, relaxation and recreation.

Facilities include a camp kitchen, bins, barbecues, filtered water, dump point, and laundry and pets are welcome on leads in the RV Park only. The club is just a short walk from the RV park, offering a range of dining and bar options, entertainment, and special events. 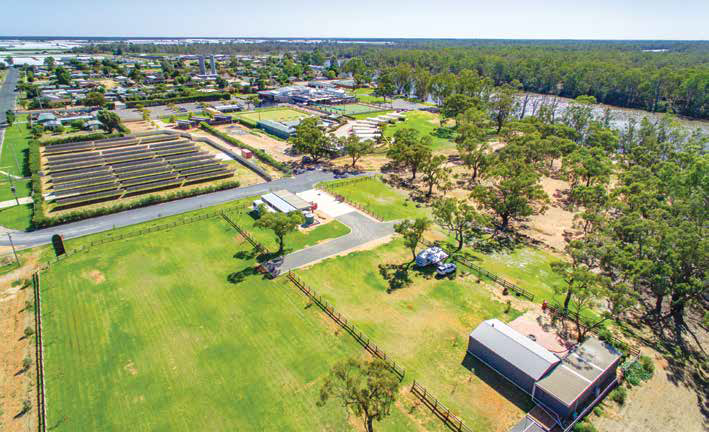 The Euston Club Resort has grown to be the premier club in the region. Starting from very humble beginnings, it has evolved to become a very important part of the Euston-Robinvale community, donating well over $5 million dollars to the region over many years.

Its facilities are second to none and also include:

• Station46 bistro, cafe, and bar boasting a deck with Murray River views and open seven days a week for lunch and dinner

• function rooms to cater for all types of functions and conferences.

The Station46 area has an all-day bar and cafe offering a comfortable, friendly atmosphere and river views either inside or outside on the covered balcony area.

The bistro is open for lunch from 12noon-2pm and dinner from 6-8.30pm and the diverse menu caters for every taste, enhanced by local wine and the freshest produce from the region’s farms. Daily chef’s suggestions are available and never disappoint. You can even order a take-away pizza.

In addition to food, the Euston Club gives you a choice of bars, where you can relax with a cold drink in either smoking or non-smoking areas. 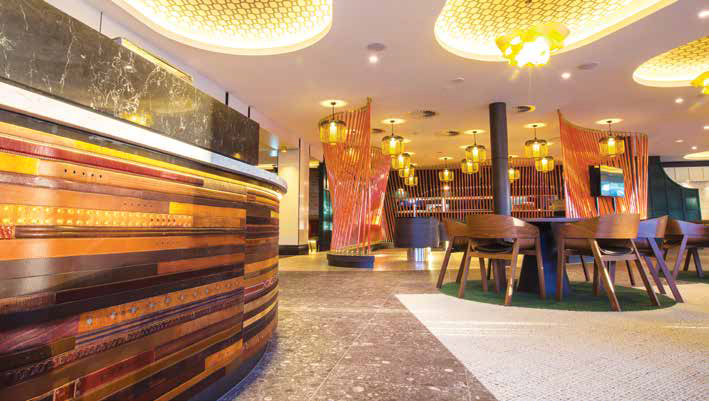 The modern club has a variety of dining options

Located between Mildura and Swan Hill in south-west New South Wales, Euston and neighbouring Robinvale in Victoria are nestled on opposite banks of one of the most user-friendly stretches of the Murray River.

Euston enjoys magnificent sunshine, fantastic surroundings and the unspoiled river, which makes it an ideal destination for relaxing and a host of leisure pursuits.

The area surrounding the Murray River at Robinvale-Euston was an important settlement for some of these clans. The area of the current weir was a main eating place; Knights Bend and Lake Benanee were sites for burial.

Bumbang Island as it is now known was originally part of the mainland of Robinvale, except for a few short weeks when the Murray was in flood.

With the creation of the lock and weir downstream in the 1920s, this stretch of river is now permanently ‘in flood’ and has become the Island as it now stands. As a result, Bumbang Island is like a time capsule of history of the Indigenous life before white settlement.

The first recorded European exploration of the area was the expedition of Charles Sturt in 1830. Major Thomas Mitchell passed through during his Australia Felix expedition of 1836.

In 1847, the ‘Bumbang Run’ was taken up by John Grant over 19,000 acres of land, including the future Robinvale township site, and was managed by his family for years until it was purchased by Mr AJ Creswick in about 1890.

The creation of channels and dams brought permanent water away from the river but only onto small holdings of land. Wheat crops were grown from the late 1800s. However, pumped irrigation water was not commonplace until after World War II.

In 1912, Herbert E Cuttle, bought land in the Robinvale area, which his 16-year-old son Robin managed until the outbreak of WWI. In 1921, Herbert purchased the land under Bumbang pre-emptive right title, had it surveyed and subdivided and established a township. He named the town Robinvale, in honour of Robin, who was killed in air combat near Villers-Bretonneux in France. 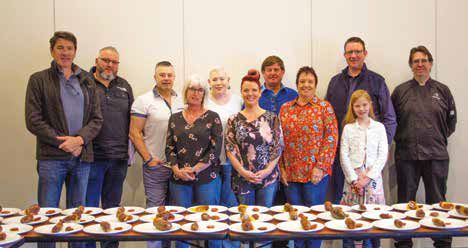 Euston is 483km from Adelaide, 719km from Canberra and 934km from Sydney via the Sturt Highway and 470km from Melbourne via the Calder Highway to Mildura or via the Murray Valley Highway.

Large areas of protected parks and reserves flank the Murray River either side of Robinvale-Euston, providing the peace and beauty to experience nature at its absolute best. The river walk from Robinvale over the bridge to the Euston Lock and Weir 15 is  the perfect way to experience the natural landscape.

If bushwalking, bird watching, fishing or water sports are your pleasure, then Robinvale-Euston has these in abundance as it boasts one of the best stretches of the Murray River.

If you like the action fast, one of our largest events is the Robinvale-Euston 80 Ski Classic. Conducted over the Labour Day weekend each year, it draws competitors and visitors alike from all over Australia. The Mallee Almond Blossom Festival  in August gets you connected to our diverse community.

Stop in at a roadside stall for fresh, home-grown, seasonal produce freshly picked for sale, or visit the monthly Robinvale Country Market and purchase fresh, seasonal food straight from the grower to you – all year round. Or you can experience the flavours of Robinvale Wines and Boundary Bend Olives.

Hattah Kulkyne National Park is a large preserve of native mallee teeming with wildlife. Kangaroos, emus, goannas, kookaburras, parrots and other native flora and fauna can be seen in their natural habitat. You could head towards Balranald and discover the newly established Yanga National Park.

Maybe you’d rather take a step back in time with a visit to the Rural Life Museum in Robinvale. There is a wonderful display of pioneering machinery and other historical memorabilia relevant to the significant horticultural pioneering region.

For a small region, Robinvale-Euston has lots to explore with great accommodation options and a friendly, relaxed and laid-back style. 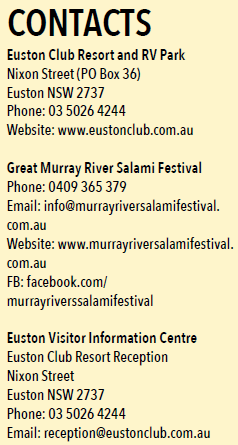