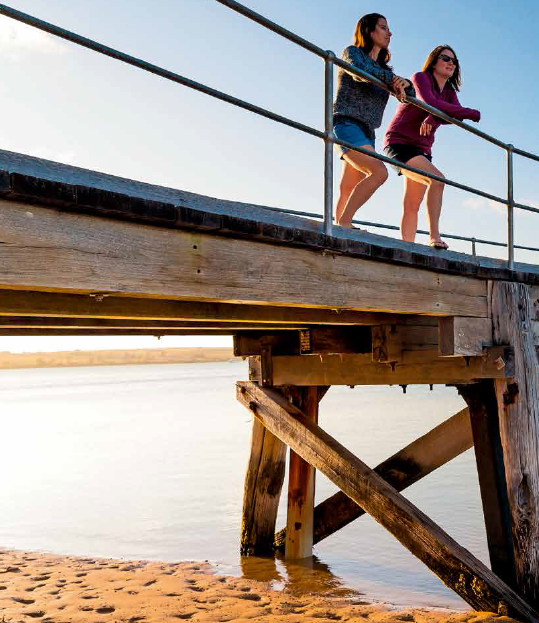 The sight of the ‘Halfway Across Australia’ sign on the highway at Kimba, SA, is enough to get even the weariest of travellers a little bit excited. It’s a milestone of sorts, providing a sense of achievement after many long hours on the road.

We’d travelled around 1240km since we left Melbourne and according to the GPS there was still another 2300km to go. So it might not have been the halfway point of our journey but it didn’t matter; we stopped for the obligatory photo regardless.

These kinds of novelty signs and icons are something Australia has in spades, providing great  entertainment for road-trippers in need of a coffee break. Kimba, a tiny town in the middle of SA’s Eyre Peninsula, and geographically halfway across Australia, has two such claims to fame.

Just a hop, skip and a jump down the road is the Big Galah. One of Australia’s ‘big’ icons, the eight metre-tall galah has been guarding the adjacent ‘Halfway Across Australia’ roadhouse with its gems, Kimba tea towels, fluffy toy galahs, and stubby holders, since 1993. Of course we had to stop in there for a look (and an ice cream) too.

Kimba is just under two-hour’s drive west of Port Augusta on the  Eyre Highway, which traverses the top of the triangular peninsula of the same name. We’d left Melrose and the southern Flinders Ranges behind that morning, and headed west across the ever-sparser plains of the peninsula’s north section. 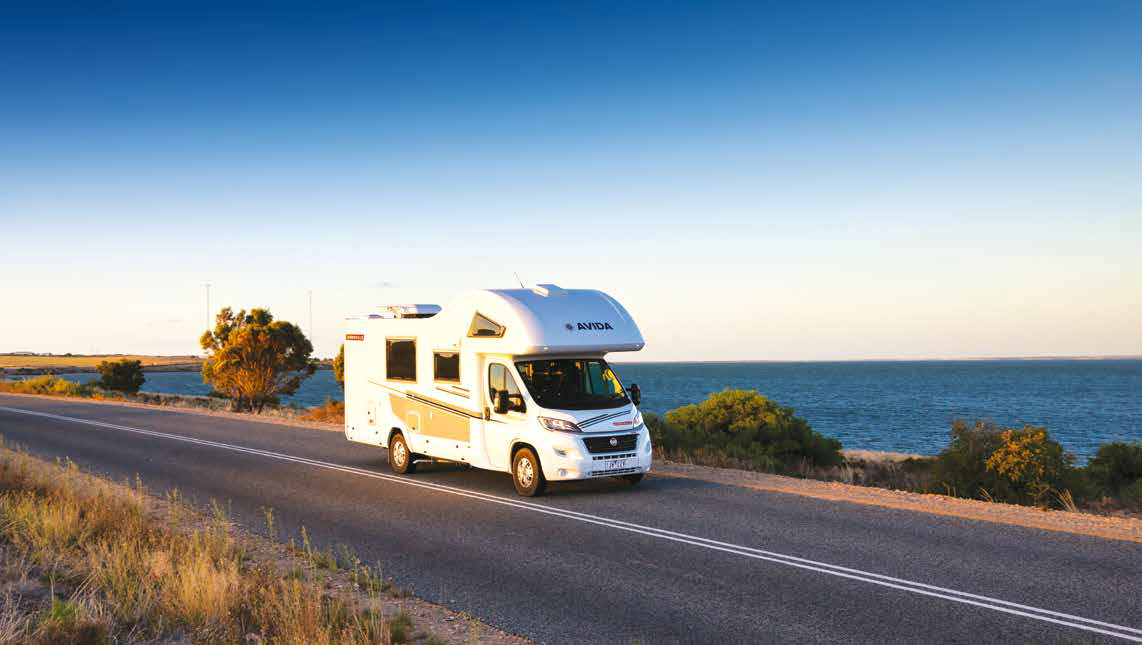 The Eyre Peninsula takes its name from Edward John Eyre, who journeyed through the peninsula in the 1840s, and was the first to record this exploration of the three sides of the peninsula. One of Kimba’s other attractions is a pair of metal sculptures atop Whites Knob on the outskirts of town, depicting Eyre and an Indigenous tracker. The sculptures gaze out across the landscape, Eyre holding a compass out in front of him, commissioned as a tribute to Eyre’s courage as an explorer, as well as the Indigenous men whose bush skills he often relied on. 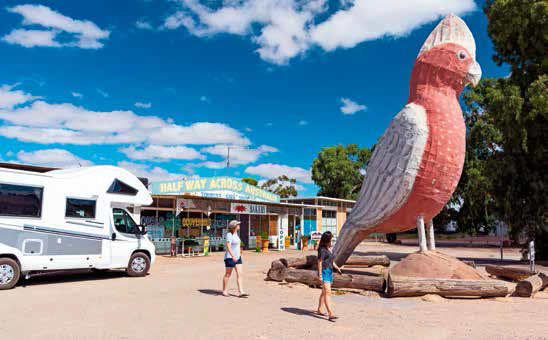 The Big Galah marks the Halfway Across Australia point

Whites Knob offers a vantage point of the surrounding countryside and you can easily drive to the lookout there, not far off the highway just north-west of town. If you have the time though, the lookout can also be reached via a six kilometre (return) walking trail through the Roora Reserve, with a number of recycled steel sculptures of native animals and interpretive signage to see along the route.

Kimba is on the traditional lands of the Pangkala Aboriginal people. European settlers began planting grains and crops here in the early 1900s, but the region was extremely isolated until the railway from Port Lincoln was extended to reach the area in 1913. The town was proclaimed in 1915 and the community began to flourish, with the surrounding district becoming one of the largest wheat growing areas in South Australia. Huge white grain silos are a common sight on the side of the highway as it passes through the small towns that dot the peninsula. 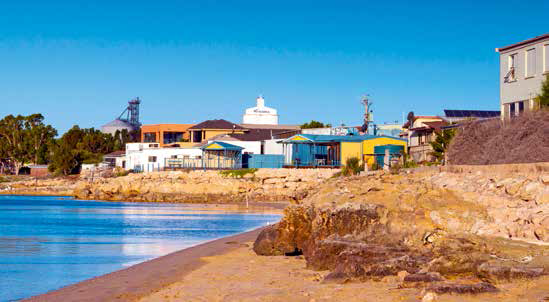 Streaky Bay is a popular stopover for travellers

For those interested in learning about the region’s past, the volunteer-run Kimba and Gawler Ranges Historical Museum features buildings from the town’s early beginnings as well as historical displays relating to farming, transport and social activities.

Kimba is the eastern gateway to the Gawler Ranges National Park, with access to the park 40km north of the Eyre Highway, via Minnipa, around 140km west of Kimba. The park is a great place to stop off for a few days, giving you time to explore the dramatic volcanic rhyolite formations known as the Organ Pipes and enjoy the serenity of sitting by the campfi re under starry skies. Three of the park’s six campgrounds can be accessed with high clearance 2WD vehicles in dry weather. 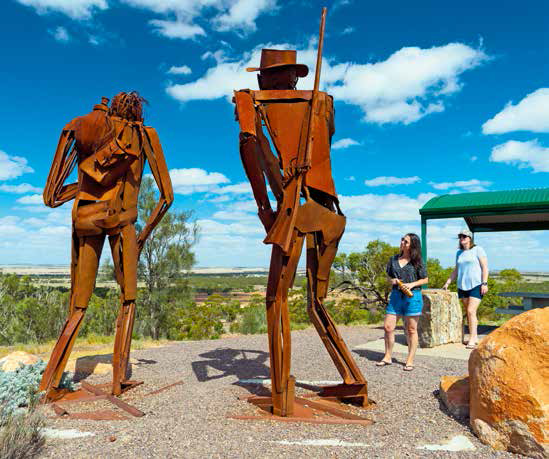 Sculptures that depict Edward John Eyre and an Indigenous tracker

After hours spent traversing the peninsula far from the coast, the ocean seemed strange and almost out of place as it appeared on the horizon behind the town of Streaky Bay. Located on the far  north-western point of the Eyre Peninsula, Streaky Bay is a service centre for the surrounding rural area and this small coastal town is a popular stopover for travellers.

We pulled into the Foreshore Tourist Park on the edge of town to find it filled to the brim and were lucky to pick up one of the last powered sites available. Our site was right behind the calm waters of the protected beach, but we had photos to take and exploring to do, so happy hour was going to have to wait. We turned our Avida Birdsville motorhome around and followed the road along the grassy green foreshore into town. 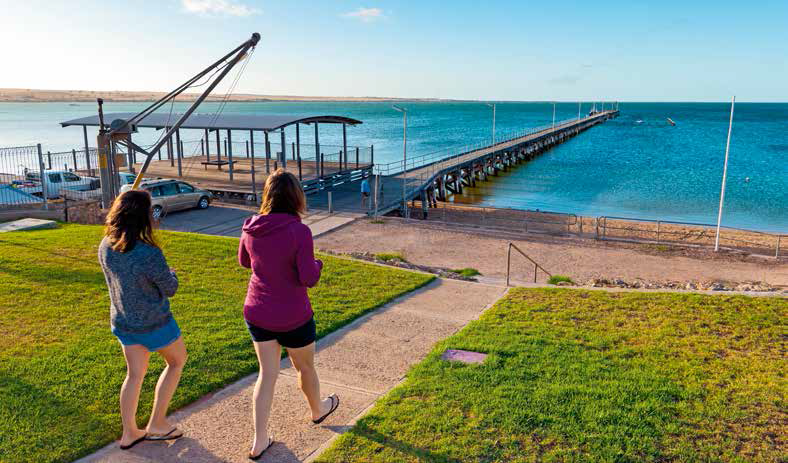 Heading out to the jetty at Streaky Bay

Streaky Bay has the feel of a sleepy fishing village and fishing is big business here. The town’s foreshore is dominated by the long jetty, which we found empty except for a lone fisherman. We wandered along the jetty as the light shifted, enjoying the uninhibited views out to sea and the peace and quiet, interrupted only by the occasional squawk of a seabird.

While our fisherman didn’t seem to be having heaps of luck, the jetty is reportedly a good spot to throw in a line and there are plenty of other fishing spots to choose from off the surrounding beaches.

Streaky Bay is renowned for its seafood, particularly King George whiting, southern rock lobster, oysters, abalone and sharks. In fact, sharks are high on Streaky Bay’s claim to fame, with a replica of a 1520kg, five metre-long great white, caught by a local fisherman, on display at the Streaky Bay Roadhouse and Tourist Centre. 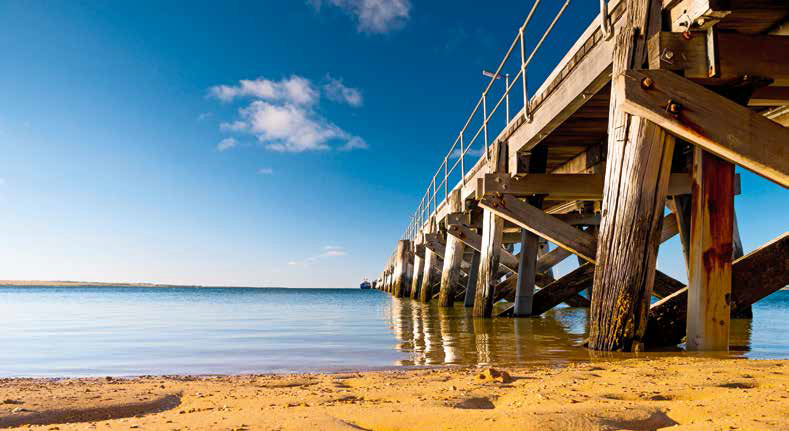 Just outside of town is the Cape Bauer Loop Coastal Drive, offering scenic vistas off the cliffs, stunning beaches where you can throw a line into the surf, and the main event, the Whistling Rocks and Blow Holes, formed from fractures in the limestone cliffs and years of erosion. For those travelling with a tinnie, there’s a concrete boat ramp around 5km outside of town on the Cape Bauer Road.

With the sun setting, our weary crew decided to call it a day and headed back to town, hoping to sample some of the famed local  seafood. We found what we were looking for at the Streaky Bay Hotel, with its friendly staff and cold brews. We settled down on the wide, covered deck, overlooking the jetty and the calm waters of the bay and tucked into locally caught King George whiting served with salad and chips. Delicious. 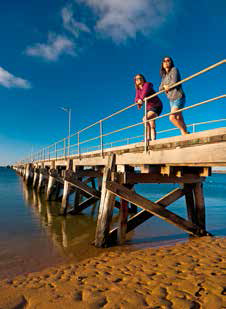 It’s the perfect place to soak up the sun.

The RV Friendly Town of Kimba is halfway across Australia, ‘as the crow flies’, in the centre of the Eyre Peninsula, around 160km south-west of Port Augusta.

Kimba is involved in the Grey Nomads program and offers short-term volunteer opportunities in exchange for free camping, allowing RVers the chance to become involved in the local community. Information on the program is available at the Kimba Visitor Information Outlet. 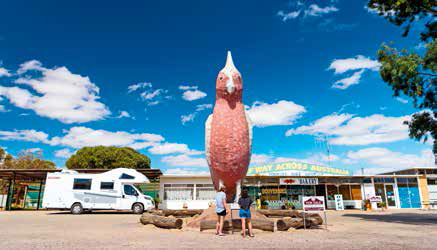 Streaky Bay is located on the north-western tip of the Eyre Peninsula, 395km west of Port Augusta.

Short-term parking is available for self-contained vehicles at the Streaky Bay RV  Site, costing $10 per vehicle, per night, for up to 48 hours. Pets on leads are allowed and the site has decent mobile coverage.

A dump point is available at the Streaky Bay Lions Park, along with potable water. 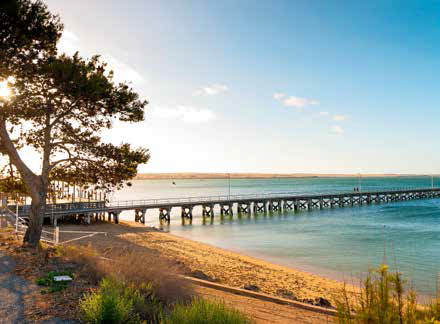 • Kimba is located on the Eyre Peninsula, 160km south-west of Port Augusta. Streaky Bay is on the western side of the peninsula, 235km west of Kimba.