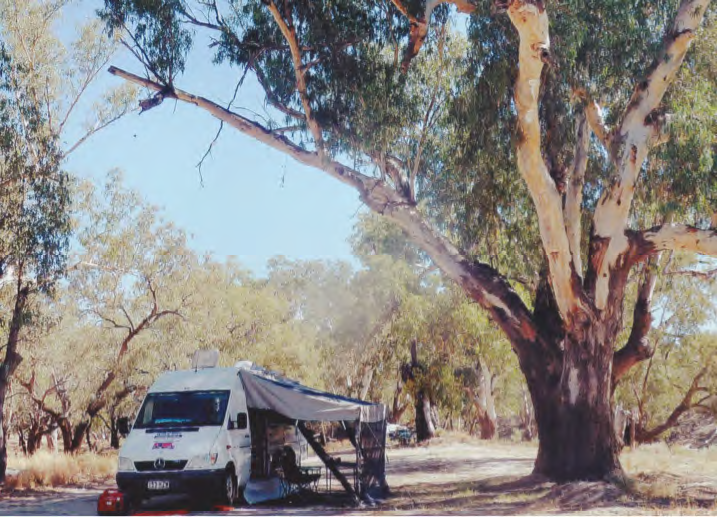 You may wonder what tenuous connection I have to Jacki Weaver but this will unfold during the story of my painting trip in my Mercedes motorhome that covered four states.

My desire was to return to the Flinders Ranges and other places I had visited briefly in my four-month around Australia sojourn in 2006 – as well as a side trip to Lightning Ridge, Bourke and White Cliffs – in the search of painting subjects in places I had never visited.

From every trip I’ve done, from Cooktown to Cockle Creek, in Tasmania, I have found that a painting diary brings back better memories, in many cases, than photographs, as I generally note at the bottom the temperature, time, wind strength and direction. Also, sometimes, photographs don’t always turn out very well, and it is fun to do paintings on site, which gives you the opportunity to meet and talk to a lot of people. 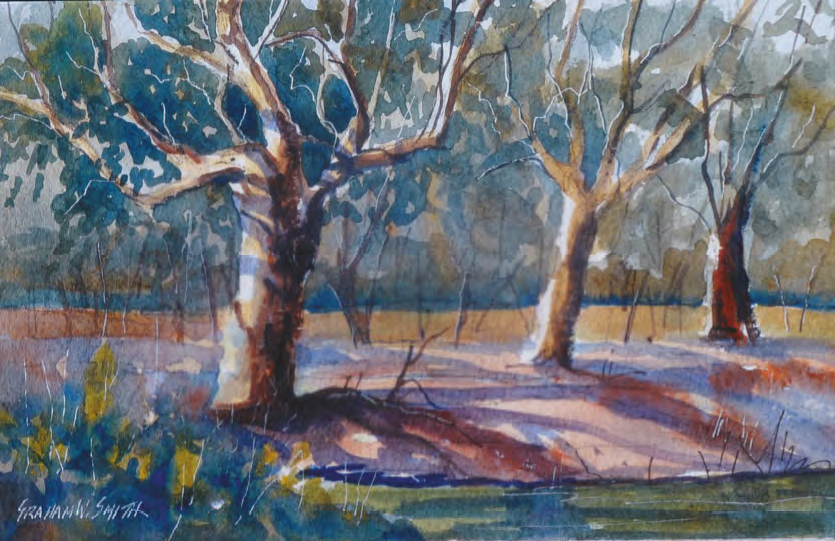 After experiencing a gusty north westerley of 42°C at Lightning Ridge, where I met artist John Murray in his studio, it was a relief to find a lovely grassy site at only 35°C at Bourke, where I spent time with pastel artist Jenny Greentree. I was invited to dinner in their lovely home overlooking the Darling River. I did an acrylic of a sunset scene looking upstream to the road bridge which you could see from her property as well as a acrylic sunset scene of the Barwon River, near Brewarrina where I had free camped the night before with lots of flies. 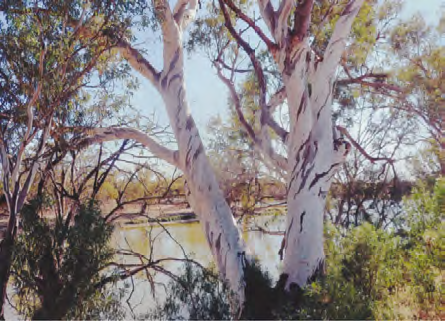 At Wilcannia, where I was invited to the studio of an Aboriginal artist, Eddy Harris, I did several watercolours of the  local gumtrees, Warrawong Billabong and water tank, which the owner of the caravan park purchased.

At Broken Hill I visited the Regional Art Gallery, Jack Absalom Gallery and several other artists which inspired me to paint the Mundi Mundi Plains, near Silverton, the locale in which Mad Max was filmed.

After Broken Hill we visited the Flinders as far north as the Ochre Pits at Lyndurst before returning to a farmstay at Beltana Station. At Beltana some llamas took delight in hopping into my motorhome to raid my rubbish bin (luckily it was empty). When I returned it was on the ground outside while they sat there only metres away, staring and chewing; they eyed me ‘innocently’. 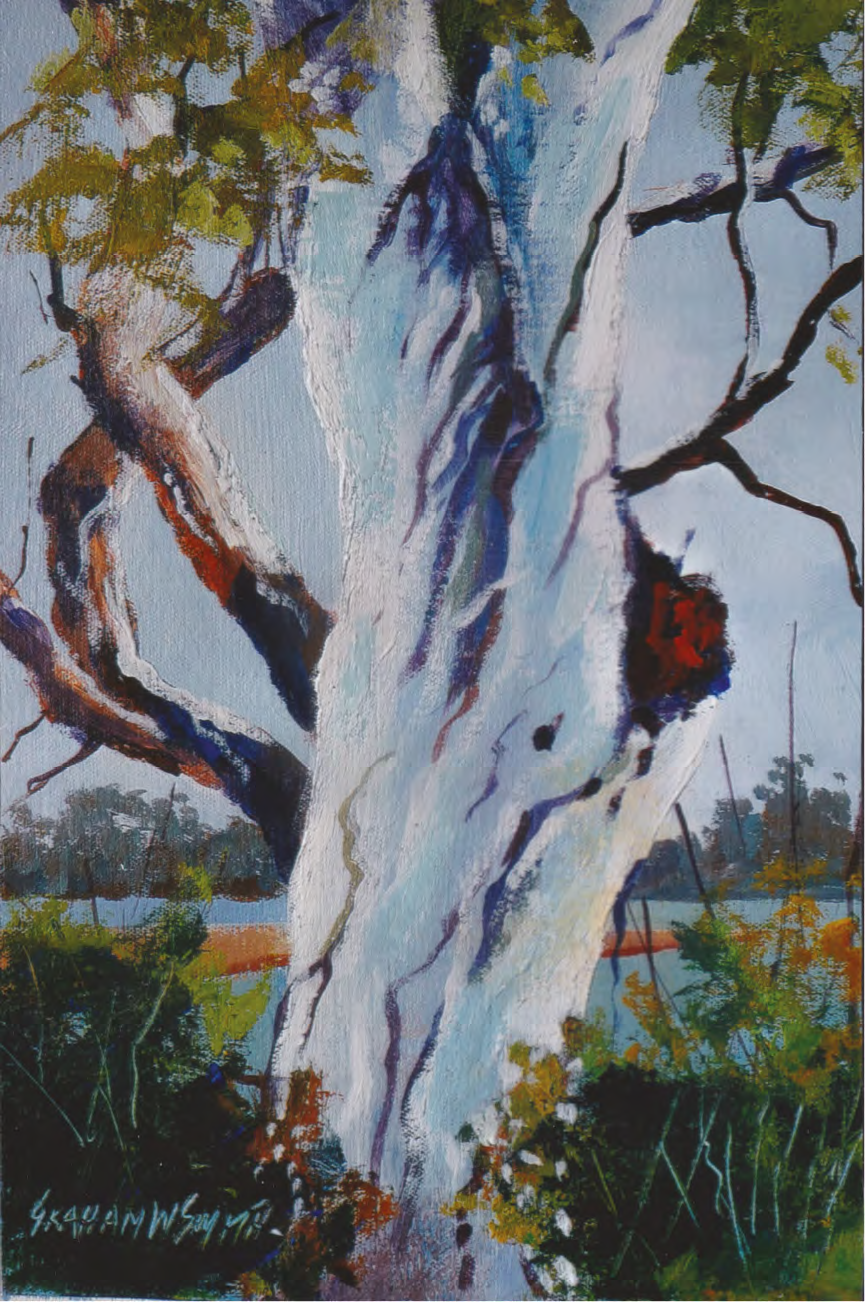 Moving onto Blinman in the eastern Flinders Ranges, I spent several nights there where I did three acrylics and a watercolour. On my return home I did a pastel of a ‘tiger lizard’ that sat motionless only three feet away outside my van while I was enjoying afternoon drinks.

At Port Augusta the temperature only reached a maximum of 20°C with a freezing southerly blowing so after two nights we decided to head north to Coober Pedy where it was 22°C at 6pm. By this stage I had covered more than 4300km in 23 days. 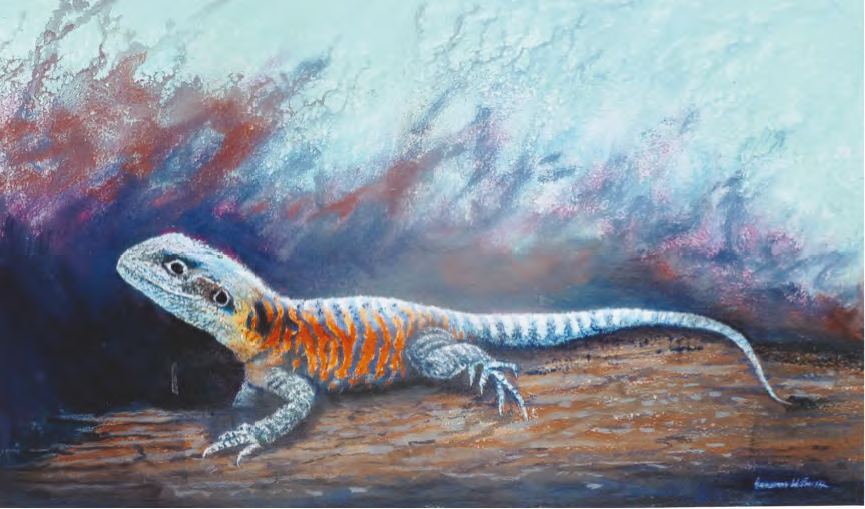 During three nights spent in Alice Springs I completed three watercolours, as we headed north to Katherine and onto our destination, Kununurra, where we arrived after 35 days and 6730km of travel. The drive from Katherine on the Victoria Highway was a delight with many painterly scenes especially the Boab trees west of Victoria River of which I did an oil (91 x 46cm) upon my return to Brisbane.

Spending five nights at Kununurra gave us time to do a side trip to Wyndham where the local publican purchased an oil painting I had done from the Five Rivers Lookout above the town (as well as two others). One of these was an acrylic of the Ord River from the dam wall after a cruise on Lake Argyle on which we’d been served a delicious silver cobbler (catfish) and salad lunch. 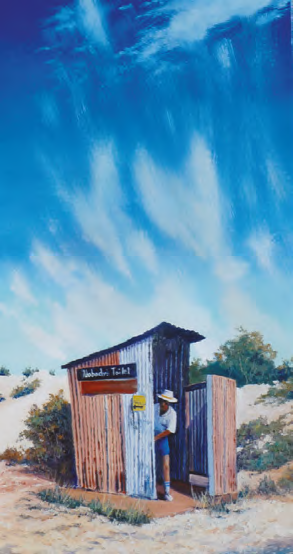 The lake is so huge you cannot see land on the horizon, just water. It was refreshing to swim in, even if 30,000 crocodiles inhabit the water (thankfully they’re freshwater, not salties).

We had three delightful nights there where I did a number of watercolours and acrylics of Bamboo Cove, which sold before I had finished. I thought it was such a good painting I couldn’t wait to do a large acrylic version when I returned to Brisbane. This painting won The Best of Show $2000 award from more than 400 works across all mediums in August 2015 and also sold. This more than covered the total cost of the trip.

The country around Kununurra is an artist’s paradise, so regretfully I had to leave Lake Argyle on Anzac Day to head south via Daly Waters and Barkly Homestead to Mt Isa. 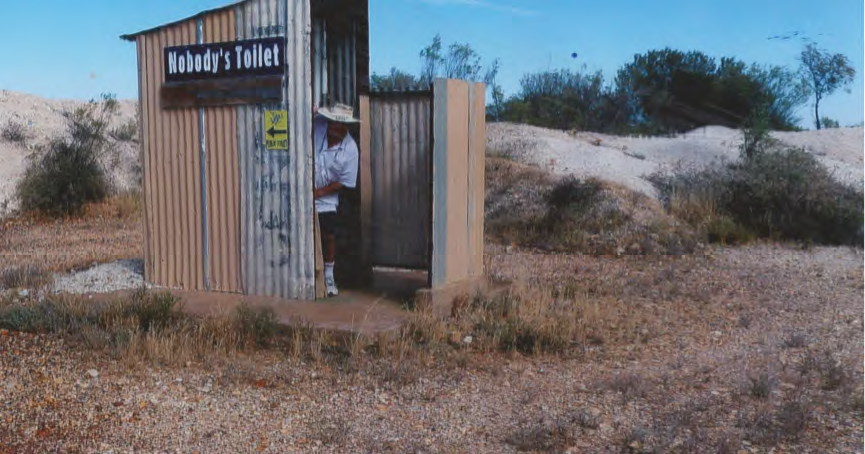 As I left Mt Isa after three nights at the caravan park, two warning lights in my vehicle indicated trouble – a high pressure fuel pump had given up the ghost after  225,000km. Luckily, we were not way out in the Mulga which would have required a very expensive RACQ tow into town. A replacement part was ordered from Brisbane and after six nights in a motel, we left for Winton via Boulia and the Hamilton Hotel rest spot.

The next day we arrived at the Middleton Hotel for lunch. We’d had an overnight stay there in 2006. When I showed the publicans my small unframed watercolour that I had done of this historic hotel, his wife, who had done some painting, agreed to a contra of the painting in exchange for two steak lunches for us. 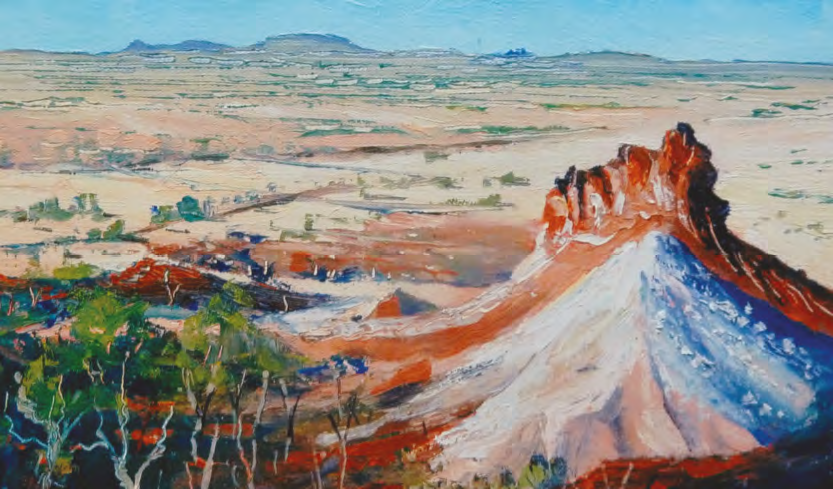 She then took the painting away and showed it to Lisa Michell who came running into the bar introducing herself as the Art Director for the movie they were currently shooting. It starred David Gulpilil, Aaron Pedersen, David Wenham and Jacki Weaver, who played the mayor in the film called Goldstone.

She said she just realised that Jacki Weaver’s Mayor’s office on the set just had blank walls, so she asked to purchase two of my oil paintings of Coober Pedy. These could then be framed and hung in the demountable mayor’s office just 2km east of the hotel.

This movie, directed by Ivan Sen, is a follow-up from 2013 film The Mystery Road in which indigenous detective Jay Swan (Aaron Pedersen) follows a missing person case to the corrupt town of Goldstone. 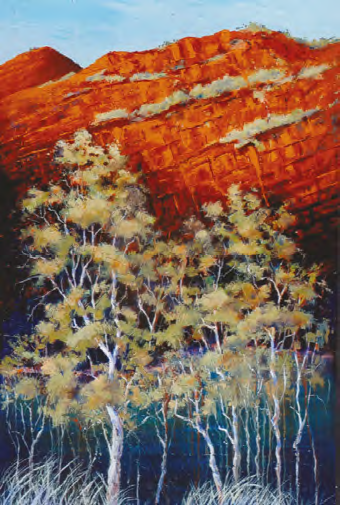 She said she just realised that Jacki Weaver’s Mayor’s office on the set just had blank walls, so she asked to purchase two of my oil paintings of Coober Pedy. These could then be framed and hung in the demountable mayor’s office just 2km east of the hotel.

This movie, directed by Ivan Sen, is a follow-up from 2013 film The Mystery Road in which indigenous detective Jay Swan (Aaron Pedersen) follows a missing person case to the corrupt town of Goldstone.

The Middleton Hotel was to be renamed the Goldstone Hotel. Upon leaving, just up the road, we saw two movie sets, one of the police station and set back 1km south of the highway, they had constructed a prospector’s cottage with a backdrop of one of the famous flat top Cawnpore hills that abound in this area. I have painted these scenes many times and upon my return to Brisbane I completed a 91 x 46cm oil of the prospectors hut that will be seen in the movie that’s due out in June, 2016. 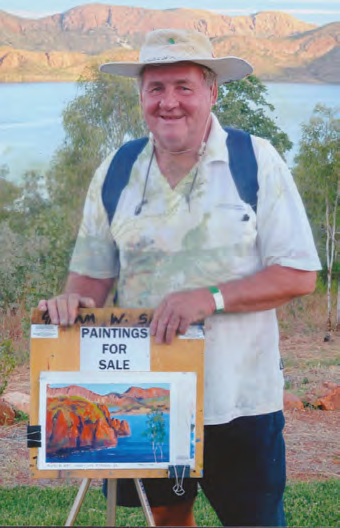 It was a real thrill to be involved, albeit ever so minimally, in this movie production – I had to sign a release for the purchase of my two paintings.

I would encourage those that have an artistic bent, however so minimal, to take the time to either sketch in pencil or pen and ink and in the margins of the sketch book to make colour notes if time precludes them from completing a  painting. If you have limited room in a motorhome I have found a photographic tripod easel makes a lightweight and compact size to travel with, as you can see from the photo of it with me at Lake Argyle (above).

Creating these painterly memories will leave a lasting legacy, not only for yourself, but also your children, of your travels in your motorhome and it will also give you many more subjects to paint when you’re at home. My role as an artist and tutor is to inspire creativity in those that wish to try painting or improve the skills of those that do. 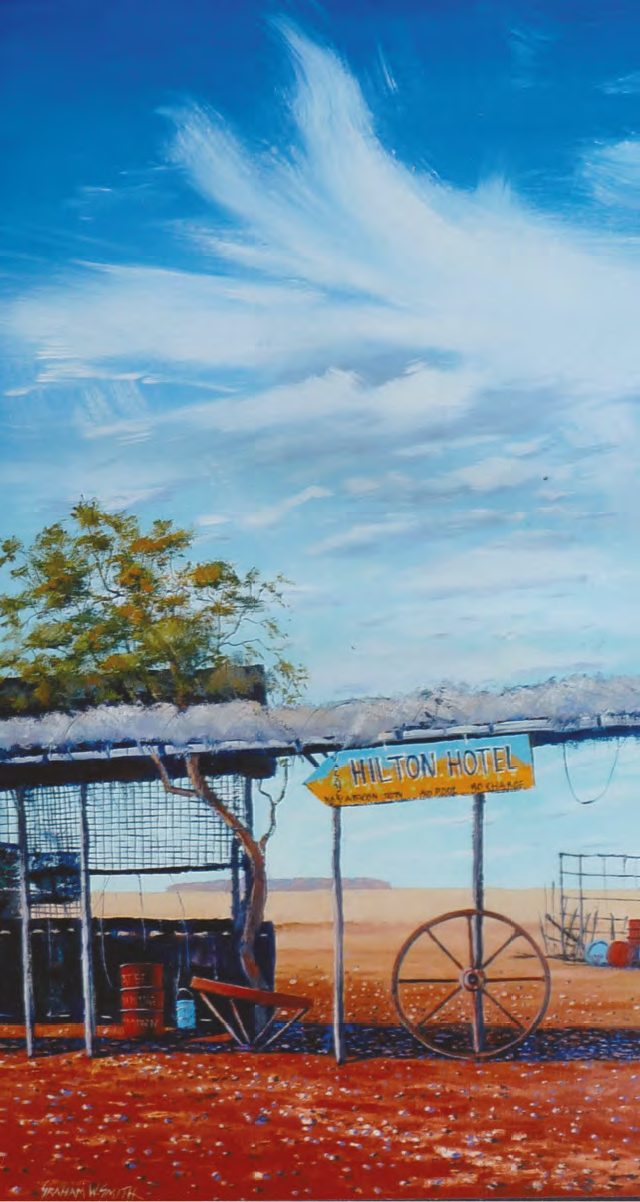