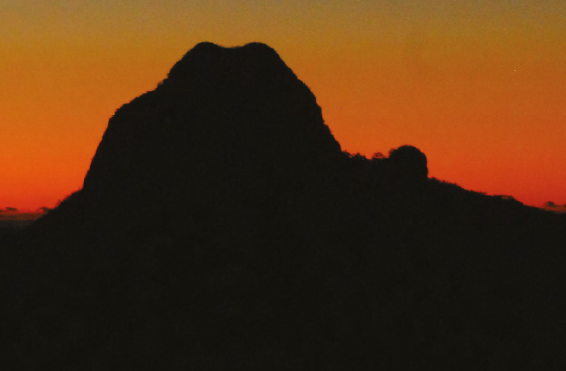 I started the next day out feeling seedy from a lack of sleep the night before, but photographed the false dawn and sat down to breakfast. This activity was somewhat distracted from when a couple of svelte young German girls pulled up beside my window and casually disrobed to their leotard top in one case and underwear in the other before they donned more suitable attire for bushwalking – it’s a German thing, those who have been there know. 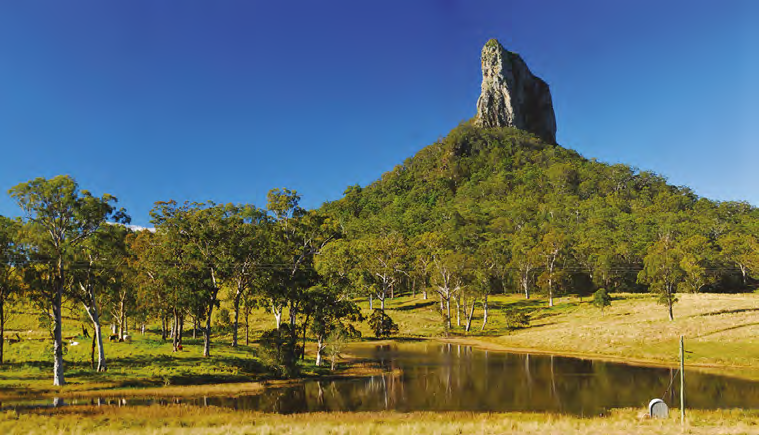 I then dawdled off, not really sure of what I wanted to do. Thus it was that I zigzagged around the hinterland for hours, coming upon Mount Tibrogargan several times, discovering Coonowrin Nature Reserve before rocking up to the Glasshouse Mountains Tourist Centre and working out what I really should be doing.

So, Mount Ngungun was the place to go I was informed. Although not the tallest (Beerwah holds that honour), it offers excellent scenery because its rock at the top is clear of vegetation so views are available when you bag the peak. (Mount Ngungun walk has been upgraded and it’s much easier, but still steep. Mostly, steps have replaced the areas where you used to scramble up.) 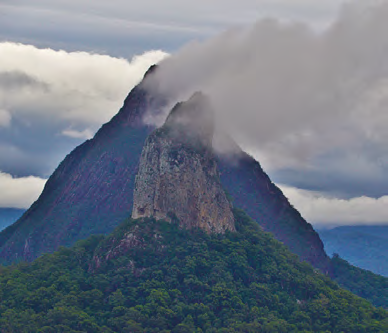 Part of the view from Mount Ngungun

I say “when you make it” because the lady told me it was two hours return so I estimated an extra half hour for pictures. What  actually happened was that I was up and back in just over an hour, having spent about 15 minutes at the top.

Having said that, after about eight minutes easy walking at the start, the badly eroded track gets seriously steep. It’s definitely not a place for the wary of foot but it pleased me to see several families scrambling their way up the two slopes that lead to the summit. Good to know that some children are getting a taste of the bush and away from the couch. 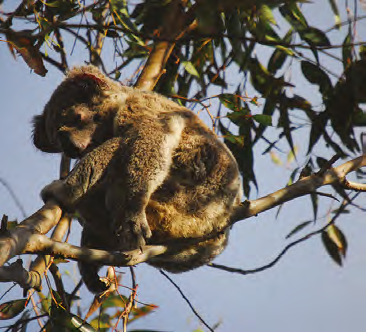 Good place for a rest at Baroon Pocket Dam

I stopped about five times on the climb and was sweating a fair bit at the summit but it’s definitely worth it. For once the day was almost made to order and I tarried with several others in the cooling breeze to soak up the atmosphere and grandeur of the semi-barren summit.

Then I aimed for Beerwah and at some stage wound up only a couple of kilometres from where I’d spent the previous night as I found the gap between Beerwah and Coonowrin on a very scenic road that few tourists venture onto because it’s unsealed. While Mount Coonowrin is out there and visible, Mount Beerwah, the highest of them all at over 500 metres, is often obscured by vegetation but its awesomeness is overpowering when you’re in the vicinity. 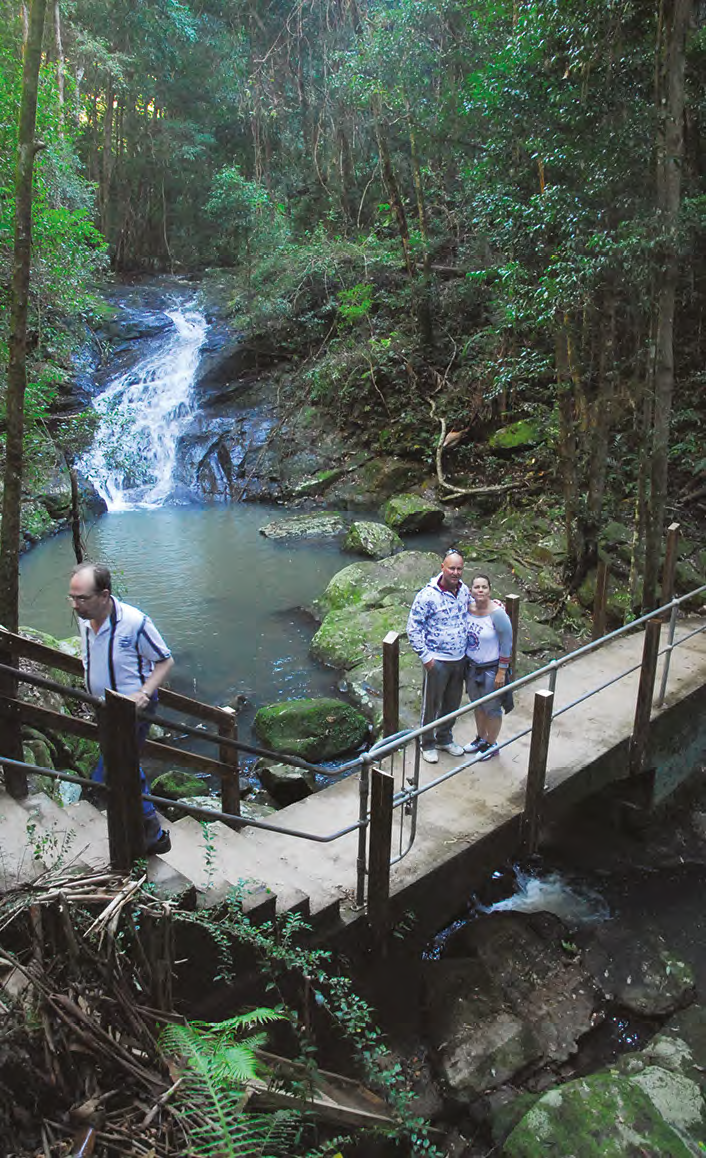 It truly is one of Australia’s great rocks and the trachyte fluting just adds to its aura. These days the summit trail is closed  because it has been deemed unsafe due to a rockfall and in 2009 a walker ignored the signs and ended up with a broken leg.

Also, a climber doing an unauthorised ascent on Coonowrin died in the attempt due to a rockfall and this peak is currently controversially (according to rock climbers) barred for climbing but not from viewing. All up three have died and more than a few rescues have taken place; best to avoid it.

But me, I was only there to take pictures and so gazed in reverence at the two most dramatic peaks of the Glasshouse Mountains. Then I moved on and out, through Peachester and up to Maleny on the southern tip of the Blackall Range with its panoramic views over vast tracts of southern Queensland, especially from the world famous Mary Cairncross Park.

Sadly, you can’t spend the night there and I moved on down to the next lookout which had views almost as good but no toilets. Just have to use mine I guessed… 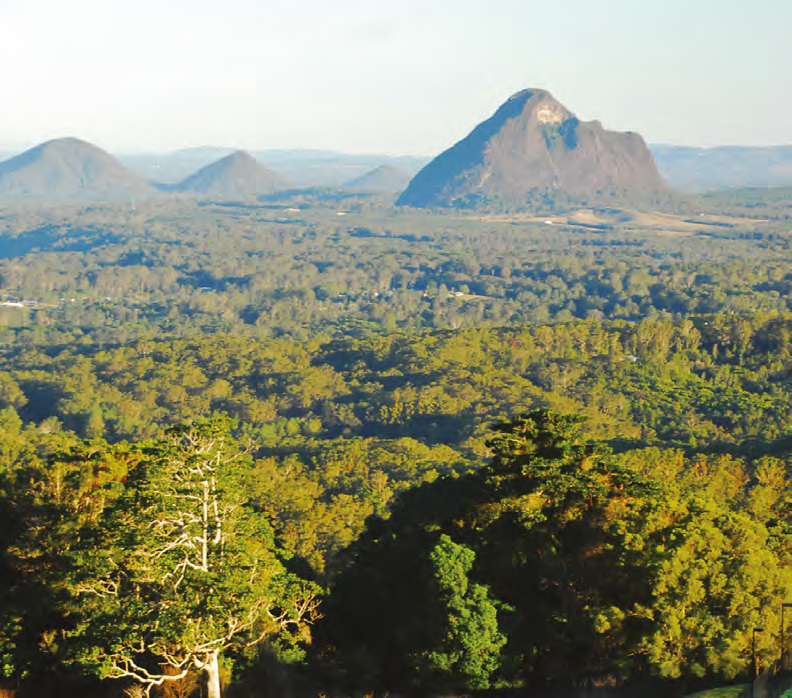 IT MUST BE HOLIDAY TIME

I was up and away early, early enough to see mist cascading from one valley over to another in an unforgettable display that somehow I couldn’t get satisfactory photographs of, though not for lack of trying as I headed down the road to Kondalilla Falls.

When I reached there and started the walk I realised I had been here before, over a decade ago and I set about getting some digital pics on file. Unfortunately, when I checked later on the computer, barely any came out. Apparently I was having trouble with the camera.

The walk was pleasant in the crisp early morning air and the roar of the water was a constant as I probed here and there in the leaf litter searching for fungi or something that moved.

Soon after I was out and went back to Montville. How lucky was I to get a premier parking spot because the place was packed, apparently it was a long weekend but I didn’t even know what day it was, such is travel in a motorhome. Every five minutes or so the roar of a group of motorcyclists echoed around the village and vintage and classic cars were parked here and there on the streets.

I tarried and viewed some of the fine galleries before heading out to a place called Baroon Pocket Dam that a photographer who had a gallery told me about. It turned out to be a lovely spot, especially for families with room to run around and lots of bench seats and toilets.

Here I fell in with a family from South Africa or, more correctly, they fell in with me. Indeed, they turned out to be album victims, actually asking to see my work.

We all sat by the water awaiting the sunset but the grandfather, who was from Oz, kept on about photography. He was guiding one of the grandchildren, continually mentioning how he’d done an arts degree and had learned so much about photography, pointing out things that seemed irrelevant to me.

He wanted everyone to know about his new lens, a 14mm macro that you could “take flowers and insects with”.

He neglected to mention that if you got as close as you needed to get with his lens the insect would be off.

He hadn’t told them about polarising filters or putting something in the foreground. It seemed to me like he needed to go back and learn a whole lot more.

Still, the family were lovely people and told me how they did home schooling and rock climbing, an interesting combination I surmised.

Then the average sunset came and went and I was off up to the lookout again, not wanting to miss the first stage of Le Tour that happened to be on at the time. 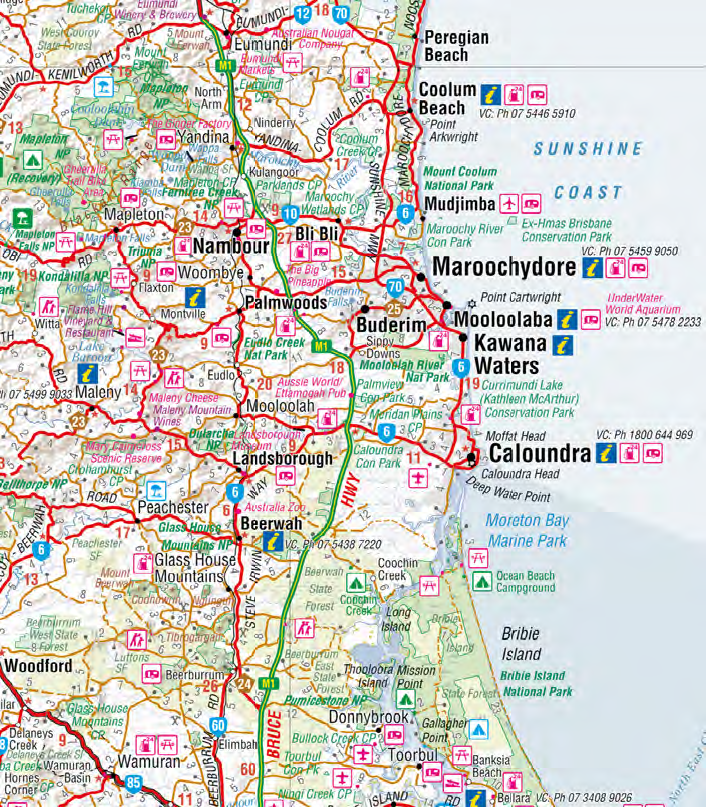 THE BIRD IS THE WORD

No visit to the Sunshine Coast hinterland is complete without viewing the Maleny Botanical Gardens and Bird World. It is, in a word, stunning. Thousands of orchids, landscaped gardens with waterfalls and ponds and the aviary have to be experienced to be believed. With more than six kilometres of walking trails and a current garden taking up 15 acres but continuallyexpanding I can’t speak highly enough of it. www.malenybotanicgardens.com.au/ 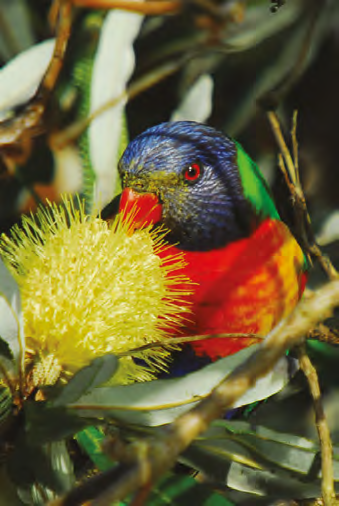 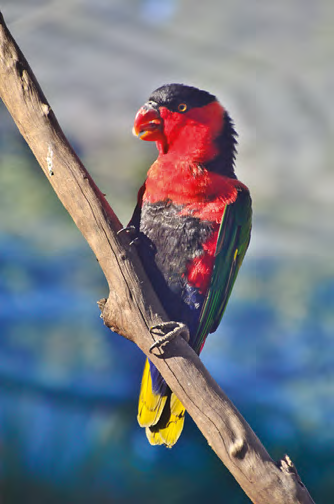