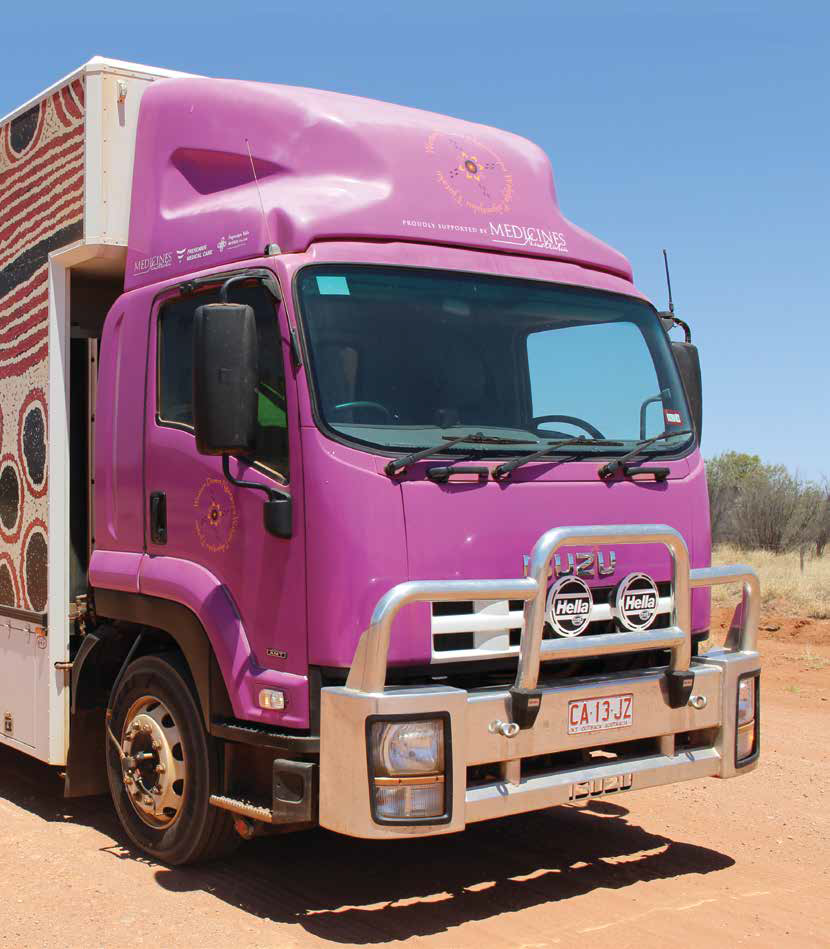 Mick and Karen Griffin have done their fair bit of travelling. The couple, from regional Victoria, started their first bus conversion two decades ago, and have spent many of those years living on the road full-time.

Since then they’ve completed four conversions of buses and luxury coaches into motorhomes. The largest was a 12-metre 52-seater, “an old Pioneer coach…a beautiful motorhome” and the latest a smaller executive coach – a nine metre 32-seater.

Mick says each conversion has suited that period of their lives. “We had our daughter with us in the earlier years as we travelled around Australia, but when she grew up I built a smaller motorhome; I have enjoyed building them.”

When he buys a vehicle for conversion, Mick says it is “usually something commercial that has reached its use-by date as far as the operators are concerned, but in good enough condition to do what I want to do”.

He says there are regulations you must adhere to. 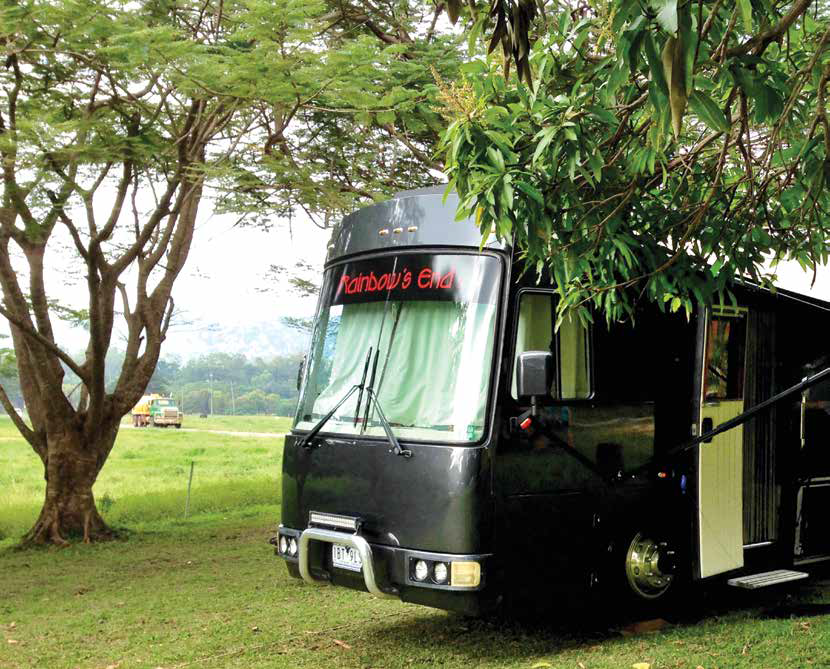 “You can’t move away from any of the gazetted Australian design rules; the vehicle must remain within that umbrella. A lot of coaches have a walkway down the middle and the seats are up higher. You can’t lower the seats, you have to take the walkway out, and as soon as you do that you come down under six foot in ceiling height.”

He replaces the front seats with more comfortable swivel chairs that also must comply, and he even has seat belts custom made in Ballarat.

When looking to convert a bus or coach, Mick is seeking comfort and convenience and at 6ft 3in that’s vital. “I make sure there’s headroom - the last one I did I had to raise the roof to be comfortable so I can walk around and stand in the shower. And the beds must be long enough”.

In terms of fit-out, when their daughter was travelling with them he installed a couple of bunks along with the queen-sized bed; “now we just have a queen bed, and we can put another bed in if one of the grandkids want to come along”.

He also has three seat-belted seats, a two-seater couch, a collapsible dining table that folds up against the wall for travel, separate bathroom and toilet, full size washing machine, 150 litre fridge, plus another drink fridge down below in one of the bins.

“You can put almost anything in your motorhome. It is just a matter of getting power to run it, and sacrificing the room to make it fit. I’ve got a fairly good solar power system. We’ve just been up to the Gympie Muster and stayed out there for a month (with no mains power).”

For 10 years Mick ran a service station in the goldfields town of Dunolly, 188km north-west of Melbourne and about 60km west of Bendigo, until he retired to travel.

“We’ve been around the country three times, up and down, in and out. We’ve done a lot of travelling in Australia, but there’s still places we haven’t been.

“If you are travelling around the country you don’t pick a destination; you just travel and stop wherever you want, then find out what there is to do locally. For the past three years since our daughter got married we’ve been away fulltime. We thought we will give the kids a start so they can have the house for a couple of years.” 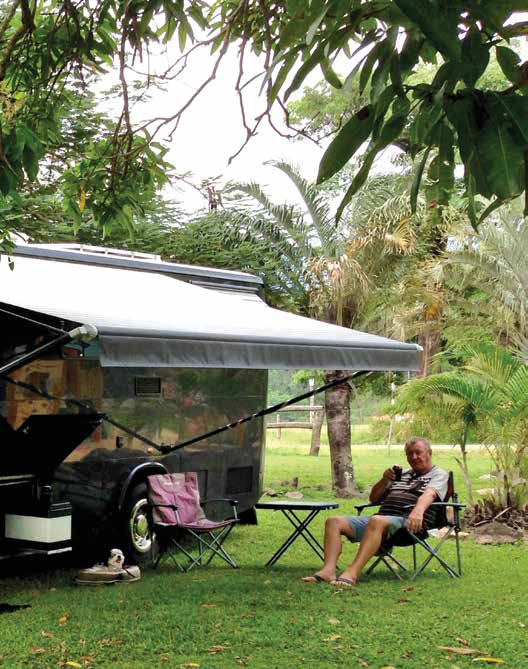 Conversions aren’t just restricted to personal use. In outback Australia, a converted Isuzu 14.5 tonner is savings lives, and keeping remote indigenous communities together.

It is a little-known problem, outside of remote indigenous families and health workers, that whole families sometimes are uprooted from their distant communities because one of them has to go to Alice Springs or Darwin for regular long term treatment for a chronic health condition.

Disproportionally more indigenous adults and children suffer chronic kidney disease requiring dialysis, for example. But in 2000, the Western Desert communities of Kiwirrkurra, Mt Liebig and Kintore unable to get government support, raised $1 million in one night from the auction of artworks – some of Australia’s most prominent Aboriginal artists live in this region. This funded local dialysis services, so their people could receive treatment without leaving homes and families to move to Alice Springs. Typical dialysis treatment takes five hours every second day.

In Alice Springs treatment is provided by Western Desert Nganampa Walytja Palyantjaku Tjutaku Aboriginal Corporation (WDNWPT), or as CEO Sarah  Brown says, “that’s a mouthful so we painted our house purple and everyone calls us Purple House”.

“It [dialysis] is like having a job,” Sarah comments, “…so what people did was they raised this money from these beautiful collaborative paintings and came up with a model of care that suited them, their communities and their families. We have been getting dialysis out to people, and put a nurse in their communities, for about 13 years now.

“Connection to country is a big issue – leaving communities is very difficult; it causes people great hardship and sadness. They worry about who will provide leadership and pass on cultural knowledge, who will look after their sacred sites,” Sarah explained, adding that so far eight remote dialysis services are in place, apart from Purple House; they are in Walungurru (Kintore), Yuendumu, Ntaria (Hermannsburg), Lajamanu,  Warburton (WA), Kiwirrkurra (WA), Yirrkala and Ltyentye Apurte (Santa Teresa).

Still some remote communities miss out, so the next step was to fund a mobile dialysis service for those without a permanent dialysis unit, hence purple truck was born.

“In 2011, we got some money and we designed and built the purple truck. We bought a 14.5 tonne Isuzu and spent $300,000 having it converted to a mobile  dialysis centre with a generator, two dialysis machines, comfy chairs, water treatment system, kitchen, bathroom, wheelchair access, even accommodation for two nurses if there’s none suitable in the communities ... it can go just about anywhere.

“You need a medium rigid licence and a few of our nurses who are five foot nothing and in their sixties have gone out and got their truck licence, so they could be grey  nomads with dialysis machines,” she laughs. 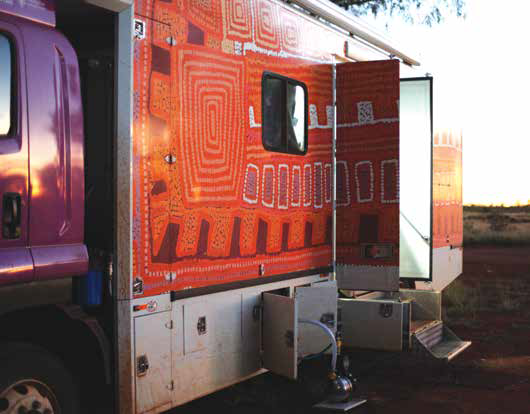 Sarah says another mobile dialysis truck in Darwin is waiting to be fitted with wheelchair access, and will then become Purple Truck 2, but they need more.

“For traditional Aboriginal people their whole identity revolves around a piece of country where they know all their sacred sites, all the seasons, where to go for bush tucker, so to have to leave all that and all the people who speak your language to be close to a hospital is just devastating … life is hard enough for people on dialysis if they just have to walk down the street.”

So she says when the purple truck emblazoned with Papunya Tula artists’ work rolls into a far flung community, they already feel better.