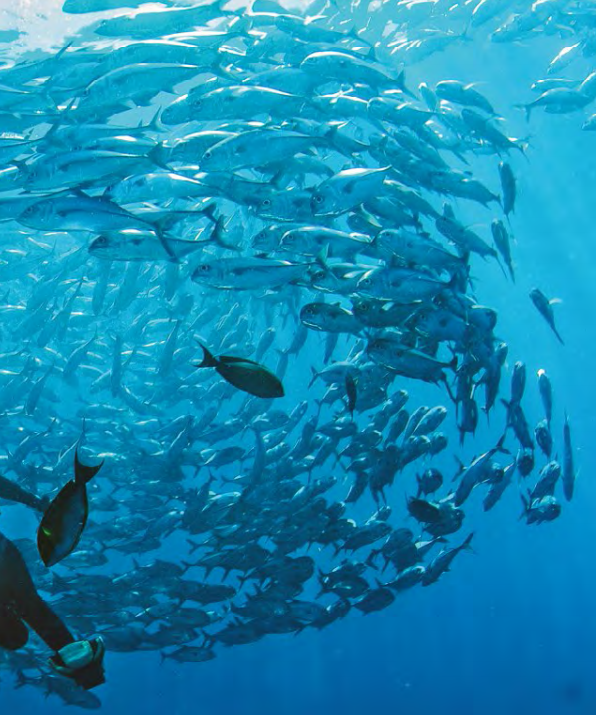 A coastal journey from north to south in our most populous state is an incredible experience. Just as national parks like the Blue Mountains, Myall Lakes and Kosciusko showcase nature at its most extraordinary the marine parks of NSW are also a must on any itinerary.

Sanctuary zones are similar to national parks on land; they are areas where we can explore marine life without removing or destroying it. They protect vulnerable areas, places that are essential for the survival of threatened species, and areas of incredible natural beauty.

Sanctuary zones protect less than seven percent of the coastal waters of NSW. These essential areas are an investment in the health of the coast and are scientifically proven to enhance the abundance, diversity and size of life within their boundaries. As our seas begin to warm from climate change, marine parks will help buffer the impacts and give our seas a fighting chance against devastating changes.

Join us on a journey through these stunning areas as we peel back the big blue curtain that hides some of NSW’s most incredible sights.

Leave the prayer flags and chai tea behind and explore what first put Byron on the map – the sea. Whales have always been big business in Byron. A century ago, whales were hunted for their blubber and oil, with Cape Byron operating a whaling station until 1962. These days, visitors to Byron still hunt whales – but now, we’re only looking. From June to November each year more than 15,000 humpback whales pass Byron on their migration to Antarctica.

For Scuba divers, Julian Rocks is a must. Protected since 1982, this jewel was named by Captain Cook after his niece and nephew, Juan and Julia. Now included in the Cape Byron Marine Park, Julian Rocks changes with the seasons. Majestic manta rays with a ‘wingspan’ of several metres glide by in the warmer months, and turtles, cuttlefish and moray eels spend the year around the small island.

The legendary surf of Byron draws hundreds of thousands to this formerly sleepy town each year and as such there’s something for everyone. Whether you’re after a simple caravan park, or to splurge on a sea-side retreat, you’ll find it in Byron. Lennox head, 20km to the south, is a great alternative away from the crowds.

A 2.5-hour drive south from Byron Bay brings you to the northern tip of NSW’s oldest marine park – the Solitary Islands. Named for five isolated offshore islands, this marine park is a real gem. Bathed in warm tropical waters from the north and cooler currents from the south, the islands are a true mixing zone with an incredible diversity of marine life. Coffs Harbour is the largest town adjacent to the marine park and is a great destination for any length of holiday.

You can get up close and personal with one of the world’s most iconic fish in a place called Anemone Bay off North Solitary Island. The bay is home to the world’s greatest abundance of clown fish – made famous by Disney’s Finding Nemo film. A trip to this incredible little bay won’t be easily forgotten.

The marine park also provides incredible fishing opportunities. Snapper, tailor, bonito and salmon are favourite catches within the marine park. Be sure to pick up a zoning guide from a local tackle shop or the marine park office before wetting a line to make sure you’re not fishing in a no-take sanctuary zone. The sanctuary zones are already showing results with the abundance and average size of mud crabs consistently greater within these areas compared to fished sites within the same estuary. 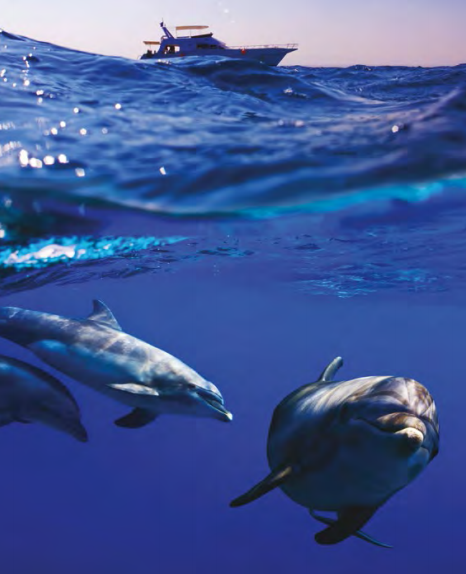 Unashamed land lubbers can keep their feet firmly on the ground on the Yuraygir Coastal Walk through the national park of the same name. The four-day walk crosses heathland, stunning beaches, remote creeks and lagoons and rocky headlands. It’s important to check local weather reports before setting out and always alert rangers to your travel plans.

Between Coffs Harbour and Sydney is the incredible Myall lakes system. This beautiful area is just as diverse under the water as it is from the land and has been protected in a marine park since 2005. The area is a fantastic destination for those seeking inspiration from nature.

Marked by Forster in the north and Anna Bay in the south, the Port StephensGreat Lakes Marine Park is the largest in NSW. With much of the marine park lying directly adjacent to the Myall Lakes National Park, the area is a haven for visitors looking for an experience in nature. But you won’t be alone. Wildlife is prolific in this special spot, above and below the surface.

Juvenile green turtles – an endangered species – are thankfully abundant in the Port Stephens estuary, and enormous mangrove areas provide excellent opportunities for birdwatching in the early and late hours of daylight. Swirling schools of yellowtail kingfish, mulloway, teraglin, trevally and bonito are found around the park’s many submerged cliffs, caves and shipwrecks.

You need not be a Scuba diver to see what’s happening beneath the sea either. Several operators guide snorkelling trips around the very popular Fly Point at the southern end of the marine park. Keep an eye out for dolphins, too. Port Stephens isn’t called the ‘dolphin capital of Australia’ for nothing. 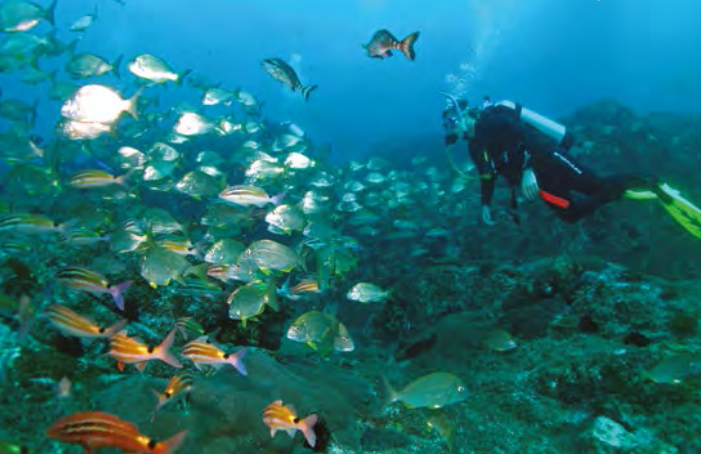 Claimed to have the whitest sand in the world, Jervis Bay has to be seen to be believed. The stunning bottle-shaped bay is just three hours’ drive south of Sydney and is a favoured spot for holiday makers from across the country. Since 1998 the Jervis Bay Marine Park has protected these rich waters and the wonderful marine life it holds.

The main towns of Huskisson and Vincentia have everything a visitor could want, including accommodation, kayak hire, whale watching, diving, fishing charters and many restaurants. There’s no better way to explore Jervis Bay than from the seat of a kayak on a calm day.

The unique shape of the bay, combined with dynamic ocean currents, mean that the marine park is a melting pot of warm waters from the north and cooler waters from the south. These cool waters are incredibly nutrient rich and provide essential food for much of the marine life of Jervis Bay.

Humpback and southern right whales pass by on their seasonal migrations, and often enter the bay to rest. Plan a trip from June to November to see these gentle giants.

NSW’s newest and southernmost marine park tells a tale of our times. In decades gone the waters of Batemans Marine Park were thick with boats chasing down whales and seals for oil and fur. Today, the whales and seals are returning in a success story for our marine life and local communities alike.

A further 1.5 hours south from Jervis Bay is Batemans Bay – the heart of the marine park. Batemans Bay, Moruya, Narooma and Broulee all offer many accommodation options and a chance to really settle into life in the slow lane.

Juvenile fish shelter in the marine park’s many mangroves and estuaries before heading out to sea. They join morwong, trevally and snapper, which are found in large number off Montague Island. Other fish like kingfish, albacore and yellowfin tuna follow the warm currents and sunfish can be found catching the rays near Montague Island in the warmer months.

Australia’s largest colony of fur seals lives within the marine park alongside little penguins, dolphins and weird and wonderful animals like the weedy seadragon. Don’t miss a genuine opportunity for personal interaction during a snorkel with inquisitive fur seals off Montague Island.

You’ll need to swap the RV for a plane to make it to NSW’s most far-flung marine park. Lord Howe Island has long been on the wish list for travellers looking for a special adventure and it never fails to impress. At 700km north east of Sydney, it’s a two-hour flight to get to the remote island. As a drawcard for birdwatchers and divers, Lord Howe Island’s rich waters are unlike any our coastal marine parks have to offer.

You won’t have to fight off the crowds on Lord Howe because a strict 400 visitor limit is upheld to protect the island’s sensitive ecology. Since 1999 the Lord Howe Island Marine Park has protected 48,000 hectares of the ocean surrounding the volcanic island. Today, the marine park is an investment in the future of tourism for the island which attracts visitors seeking charter fishing opportunities and some of Australia’s most incredible oceanic diving.

Home to the world’s most southerly coral reef, Lord Howe is a crossroads for ocean species. Five major ocean currents collide here, and the rich variety of water temperatures, nutrient levels and habitats allow a fascinating mix of tropical, sub tropical and temperate species to survive.

THE FUTURE OF MARINE PARKS

Marine parks are more than just something to look at. They are essential to maintaining the health of our coastal environment and marine life which is the backbone of many coastal industries and economies.

At NSW state and federal levels governments are giving in to noisy minorities who want to water down protections for marine parks. The Nature Conservation Council of NSW and The Wilderness Society are committed to protecting these areas but we can’t do it alone. Please visit: www.nccnsw.org.au/ take-action/marine to lend your support.

By establishing and supporting marine parks in NSW, and around Australia, we’re one step closer to leaving our children a healthier lifestyle and environment than what we inherited, and that can only be a good thing.

Cape Byron is NSW’s northernmost marine park so the sun is usually shinning and the temperature rarely drops below 18°C during the day in winter. To watch the whales, visit between June and November. Holiday periods get very busy in this popular spot so are best avoided if you can arrange it.

Coffs Harbour is an excellent base to explore the Solitary Islands Marine Park. Woolgoolga is also a fantastic option for those really wanting to detach from the rat race. For maps, accommodation listings and ideas for things to do visit: www.coffscoast.com.au/

You can’t go wrong for weather around Port Stephens, a summer maximum of 27°C and a winter max of 18°C makes it a great place to be year round. Visit: www.portstephens.org.au for more. If you’re making the journey from Coffs Harbour, South West Rocks is a great overnight stay with exceptional diving opportunities for you to dive with critically endangered – and harmless – grey nurse shark.

Being so close to Sydney it’s best to avoid Jervis during school holidays. Visit the local tourism association’s website for more information at www.jervisbaytourism.asn.au/

Anytime is a good time to around Batemans. The average maximum temperature ranges from 24°C in summer to 17°C in winter. As you’d expect, holiday times get busy but you can always find somewhere to escape. Visit the local tourism website for more information www.eurobodalla.com.au

Lord Howe’s warm climate is suitable for yearround visits, though September to June are key times to visit. The island offers a diversity of accommodation options and local tour guides can be found at www.lordhoweisland.info/