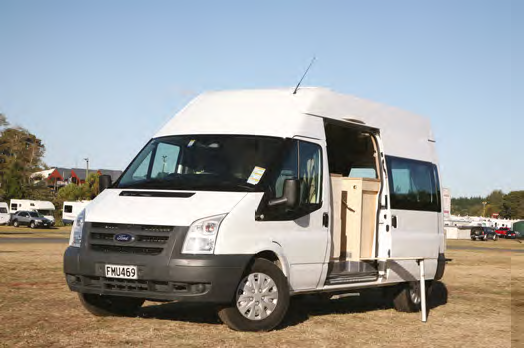 Times have changed; new Bedfords have not been available since the 1970s but the Ford Transit (as used by KEA) is still around, albeit in a very different form

Not so long ago, KEA Tracks was taking a look around our fleet of rental motorhomes and while in the depot happened to glance over a much older motorhome that definitely had more than a few kilometres on the clock. It was an interesting reminder of just what we take for granted these days, even just over a decade ago things were a great deal more basic.

If we were to go back to the late 1970s there was a time when the rental motorhome industry really only existed in any numbers in Tasmania or in our home base of New Zealand. Of course things have changed greatly since then and we’re proud that we were very much part of the expansion of the rental motorhome industry throughout Australia. Much has changed since then but we’re still around.

Undoubtedly the greatest change for many people has been the base vehicles that are currently available. Going back to a time when campervans were in much greater numbers, vehicles like the venerable Volkswagen T2 was one of the mainstays. The Toyota HiAce was also popular. Since that time several models have come and gone, including a few forays from Korea but it’s a point of note that the VW and the Toyota are still around, albeit in much more sophisticated form.

Further up the size scale to cab-chassis coach-built motorhomes it’s a fact that for quite a few years, Japanese trucks from Toyota, Mitsubishi, Mazda and Isuzu ruled the roost. Truck, and all that implied, being the operative word. It was the arrival in numbers of the Europeans, Mercedes-Benz, Volkswagen, Ford, Fiat and Iveco that changed the market in quite a few ways. The European trucks were much more car like, not only in comfort levels but safety and emission features as well. There’s also no doubt that currently the Euros are winners in turbo-diesel technology. All the Euro manufacturers are still with us but Japanese representation in any numbers is really only from Isuzu. Interestingly, the Americans, who build more than a few trucks have achieved little in terms of market penetration in Australia, apart from that of A Class chassis.

Between the above two categories is an area of the motorhome market that almost didn’t exist 10 years ago; that of large van conversions. Again, the European manufacturers changed all that and an entirely new and highly successful sector of the market emerged and continues to grow.

Motorhome manufacturers have changed considerably the way motorhomes are built. Many followed the caravan way of doing things, that is, a sub chassis with a frame above and aluminium cladding. Much has changed here of course and for many manufacturers, the frameless, sandwich composite wall structure in a variety of different ways is now de rigueur.

In terms of equipment levels, there have been huge changes. For instance, just have a look at the way security doors and double-glazed acrylic windows are now almost universal. Where once an air-conditioner might have been considered a luxury option and awnings not considered necessary, they are now very much standard items. Of course, many motorhomes these days have a microwave oven and even the humble but necessary fridge has evolved from a gas-only-fired unit to the three-way absorption style or the 12V compressor models.

Generally speaking, in the catering department, LP gas has been the mainstay but there are a few who used methylated spirits cooktops and for those who like neither, then dieselpowered hobs are available. While many just think of airconditioners in Australian heat, diesel heaters are certainly finding a market for those who like to travel in cooler areas.

Undoubtedly some of the greatest changes have occurred in electrical systems; 12V batteries have become much more efficient with the development of deep-cycle and lithium batteries. Solar technology has evolved hugely – KEA Tracks reckons that the recreational vehicle industry has very much lead the charge, pun intended, in solar panel development. Lighting, too, has become very energy efficient, moving from 240V fittings to 12V and then from incandescent bulbs, to basic fluorescent, halogen and currently to sophisticated LED systems. Flat-screen TVs with their minimal size and weight have made watching TV so much easier, as have satellite TV systems.

There’s not much doubt that all of the above has raised our expectations of what we might find in a motorhome. Some have certainly increased the weight factor but others, like electrics, have done much for lighter travel and energy efficiency. What will the next ten years bring? A good question but if any of the above is guide, then there will be much to look forward to.