KEA Tracks recently spent some time wandering around the Sydney caravan/motorhome show and the trade area at the Bathurst 30th Anniversary Rally; there was plenty on display. It gave us time to reflect on design changes that have occurred over the last five or six years or so.

One odd feature about the light commercial vehicle manufacturers is that they tend to be coy (especially in Australia) about available new models or at the very least design improvements, which tends to be the case rather than all-new models as such. As a result, these improvements often get missed by potential buyers but they are happening, particularly in terms of safety and comfort.

While on the subject of base vehicles, something that often puzzles Australians is the lack of fully automatic gearboxes in motorhomes. The main reason is that manual gearboxes are still very common  in Britain and Europe and the truck manufacturers’ reflect that. This is why a full auto gearbox was only available from Mercedes-Benz until recently as Iveco added its late last year. Fiat and Japanese Isuzu still employ the automated manual version – as did VW with its Crafter when it was available. The Ford Transit has not really re-entered the motorhome market because it only has a manual gearbox.

Designs in the house part of Australian motorhomes follow overseas, mainly European, trends but also tread a unique local path. Some are innovative but some we are not so sure about in terms of being eco friendly or even practical.

In no particular order: island double beds have become very common; drop-down beds have increased in number; the time honoured Luton bed has almost disappeared as a main bed; kitchens seem to have become smaller, bathrooms seem to have become bigger; LED lighting has become universal; solar panels are much more common and lithium-battery-based systems have become more noticeable. There has certainly been a rise in high-tech features especially in battery/charger systems.

Some particular features have appeared, been a strong favourite for a while and then declined in use. Like, for instance, a standard motorhome door that  was retro fitted to a large van conversion, aka whizz bangs or whirr clunkers. The large sliding door was seen as a bit of a negative, being noisy late at night and not so space/design efficient so the sliding door was replaced by a moulded panel that included a normal motorhome door, however, there seems have been a return to retaining the sliding door. KEA Tracks prefers the sliding door and wonders if it has something to do with space perceptions or lack thereof with a fixed door. 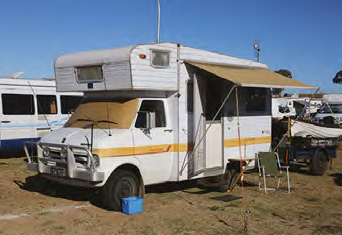 Size-wise, we reckon that two trends have emerged in recent years. One is that motorhomes are generally getting larger but conversely we have seen the increased use of smaller large van conversions. These can be fully self-contained and quite comfortable motorhomes for one or two people. They seem to be popular with two groups of buyers – campervan owners who want to upsize and cab-chassis-based motorhome owners who want to downsize. They are also popular with those who’d like a four-wheel drive motorhome but given their cost, settle for a four-wheel drive van.

Separately, when having a stroll around the Bathurst rally site, KEA Tracks reflected on the fact that a decade ago, owner-built motorhomes/conversions (some very well done) were quite common but these days are much rarer, indeed at the rally there were less than a handful of new creations. 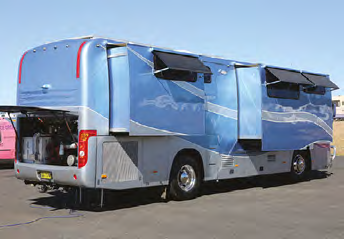 While having a presence in Australia, imported motorhomes do not currently have a major influence on the local manufacturers, unlike in New Zealand. However, we suspect that times are changing and, especially in a couple of design categories not really available in Australia, several potential importers are just over the horizon.

So what do we reckon for the future? We think that given our global economy, all local manufacturers should keep an eye on overseas trends from Britain/ Europe and the USA, but particularly the Europeans. While the US manufacturers are good at providing space, the Euros are the masters of space usage and building fuel efficient vehicles. In the eco tread lightly/leave no trace world we should be aiming for, that’s no bad thing at all.