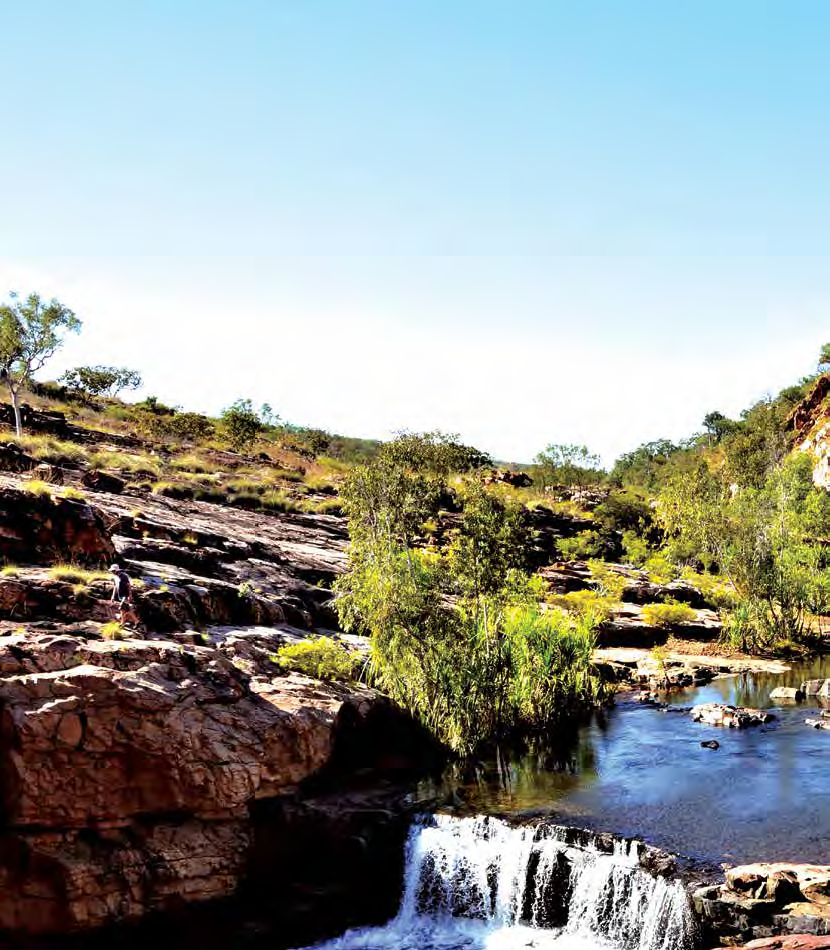 Our trip included a stop at Leighhardt Falls, Qld

After many smaller trips around Australia in a succession of caravans and a motorhome, my hubby Grant and I decided to explore the unpaved roads that crisscross our wonderful continent on an extended trip and camp under the stars in comfort.

The Sydney Camping and Caravan Show introduced us to many possibilities. We left the show smitten with a 4WD Mercedes LWB Sprinter, fitted out by Horizon, a Ballina company specialising in campervans.

After studying our finances, we took the plunge. Both being in our 70s and having lost many friends in recent years, we decided we had no time for procrastination — it was time to tackle that ‘bucket list’.

Our motorhome was ready on schedule, and at Horizon’s request, we spent a couple of days zooming around northern NSW to ensure there were no problems. We then headed home to the Blue Mountains to pack for a shakedown trip to the Victorian High Country. After all, it was mid-summer and the High Country would be cool and away from coastal crowds.

We explored every nook and cranny along the Mitta Mitta River, only encountering a few rough tracks at the entrances to camping spots. While 4WD was never a necessity, we purposely engaged low range when the going was rough and camped to test power capabilitiesand water usage. All worked brilliantly and we felt ready to tackle Australia’s interior. 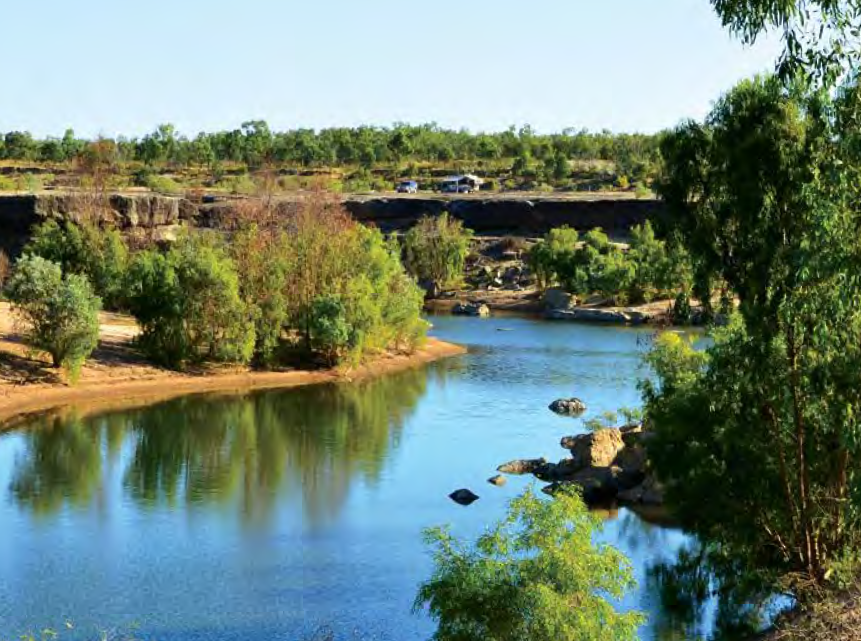 Going from an Avan Ovation to a compact Sprinter did mean space was limited and the conundrum of what to pack ensued, but finally, we set off with the wonderful small town of Hungerford, on the Paroo River, as our first objective.

The romance of Hungerford lies in Australia’s literature. Since reading Arthur Upfield’s Bony books, I had harboured a curiosity for the town. Hungerford also claims a strong link with writer Henry Lawson as Henry walked 200km from Bourke to Hungerford during a period of drought in the 1890s. His later stories reflect the profound effect this area and people had on him.

Hungerford is just in Queensland on the north side of the Dingo Fence on the NSW/Qld border. The pub is a delightful watering hole and the publican turns out a great meal. Across the road is a comfortable, basic caravan park with good facilities, grassy sites and a newly installed washing machine that is free.

Nearby is the Currawinya National Park. With its myriad of lakes, rivers and wetlands, it is one of Australia’s most important inland waterbird habitats. 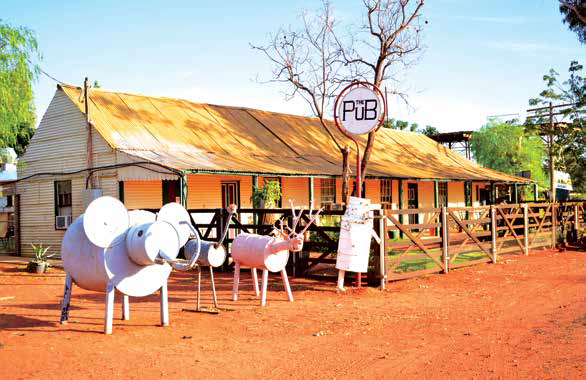 The Hungerford road heads north-west out from Bourke. We encountered a few corrugations, some bulldust, families of emus zigzagging perilously across the road and only one vehicle, heading south.

We spent four months on the road and covered 15,500 kilometres. Our route took us through Hungerford, Noccundra, Eromanga, Windorah to Winton where friends, Chris and Barrie, joined us for the next leg of our journey. Barrie, an amateur radio buff, came equipped with a Nissan Patrol, camper trailer and HF radio, which would provide communication in case of mishap.

From Winton we headed to Boulia and onto Alice Springs via the Donohue and Plenty Highways. From Alice Springs, we travelled to Marble Bar via the West MacDonnell Ranges, Gary Junction and Telfer Mine Roads. On reaching the Western Australian coast at Port Hedland we headed north to Derby to tackle the Gibb River Road, then across to Mataranka, Cape Crawford and Borroloola and down to Camooweal, Cloncurry, Gregory River, Burketown and Normanton. From Normanton our route took us across to Mt Surprise, Einasleigh  then Chillagoe and Cooktown, where we finally turned south for the journey home.

Our vehicle performed magnificently, but it has limitations. With dual rear wheels, reducing tyre pressure wasn’t a viable option, load rating was a consideration and the possibility of tyres rubbing together was Grant’s greatest fear. The length of the Sprinter also excluded some of the more adventurous routes, where steep access to creek crossings may have been difficult. Sometimes I had the feeling that Grant used these ‘concerns’ to stifle some of my more ambitious plans, but we did visit most places on my wish list, so not too many complaints from me. 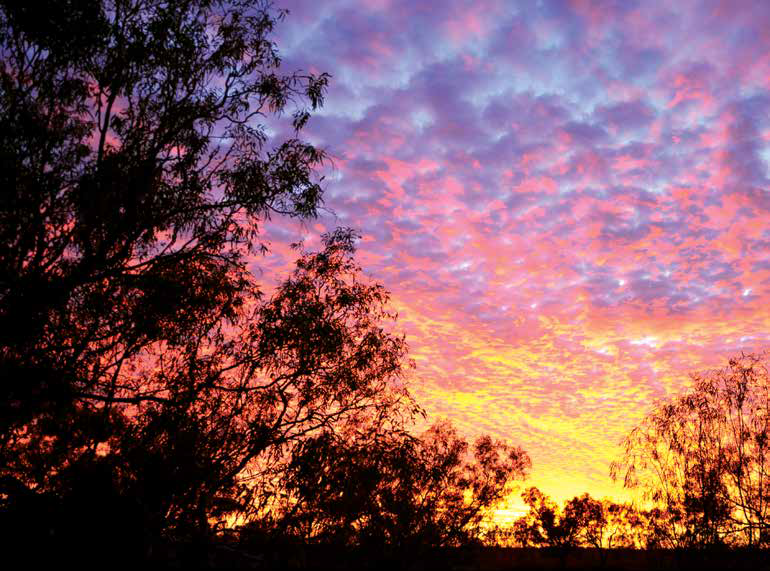 A sunrise at Cooper Creek

The highlights were many. In fact the whole trip will be long remembered as it was adventurous and exciting, providing new vistas of incredible beauty and reassuring us that our travelling days are far from over.

The journey across the Centre on the Gary Junction and Telfer Roads was totally new to us, so it must rank on the top of the highlights, but it is really a difficult choice. Our route traversed deserts full of life and stunning scenery — camels wandered along the road and wallabies, lizards, birds of prey and tiny birds with iridescent plumage accompanied our journey.

We camped among Desert Oaks beside wells of the seemingly pure water, sunk in the 1960s when Len Beadell pushed the road through for the Woomera Project. Lake Dora sparkled a harsh white in daylight and turned an amazing hue of soft pink in the rising and setting sun, while Carawine Gorge, near the Telfer Mine, proved a fitting resting point at the end of our desert crossing before we re-entered Marble Bar and the hustle and bustle of Port Headland. 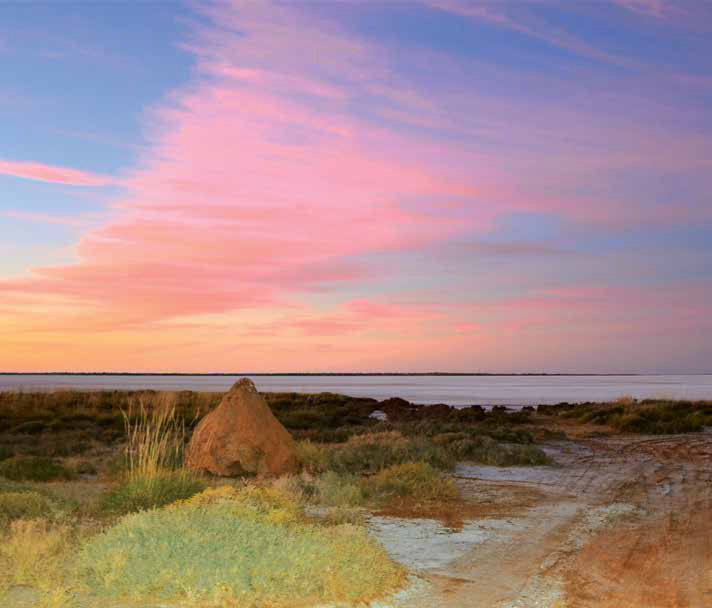 The Kimberley region is vast and incredibly interesting with stunning scenery. Every turn in the road produces a vista of beauty. Every gorge along the Gibb River Road is  spectacular. Many provided physical challenges to reach on foot, however, crystal pools, shimmering waterfalls and incredible rock formations rewarded the effort — it is a real joy to visit.

The volume of traffic and the road conditions did take the gloss off the Gibb River Road for us. Grant was anxious to put those conditions behind him so, rather than the three weeks planned, we crossed in eight days, much to my disappointment.

We caught king salmon on 80 Mile Beach in Western Australia. Helifishing from Home Valley on the Gibb River Road, while an indulgence, was a thrill and a highlight as I managed to catch my first ever barramundi.

Fossicking for zircon near Gem Tree on the Plenty Highway and for topaz at O’Briens Creek, near Mt Surprise was hard physically, but thoroughly enjoyable. Games of finska at Little River, a rough camp near Cape Crawford and beside the Lagoon at Camooweal was a great way to exercise while enjoying the company of fellow campers. 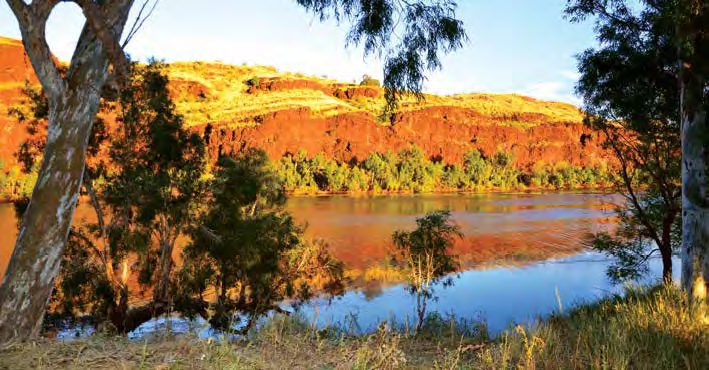 All set up at Silent Grove on the Gibb River Road

Camping on the banks of the picturesque Corella River, in Clem Walton Park, was pure magic. The park is about halfway between Cloncurry and Mt Isa, and while  the campground at Corella Dam was crowded, just a few kilometres further on the river provided a series of perfect camp spots.

When our motorhome was perched at the edge of the cliff at Leichhardt Falls, on the Burketown to Normanton Road, I found a sound night’s sleep elusive. Only a trickle of water flows over the falls during winter, so one can only wonder at the spectacle the wet season would provide.

A visit to the tiny town of Einasleigh, with the Copperfield Gorge right in the middle of town, was also a delight. The town, with a population of less than 100, provides excellent camping facilities with well-tended public toilets, and there’s a welcoming publican at the town’s only hotel. On the road heading south from Einasleigh, we discovered a secluded camp spot beside the Einasleigh River near Carpentaria Downs.

As we finally headed towards home, we veered off course to visit the Blackdown Tablelands. With easy walks and spectacular views, Blackdown was a wonderful way to spend a few days — the cool nights reminded us that we were indeed heading south before the end of winter. 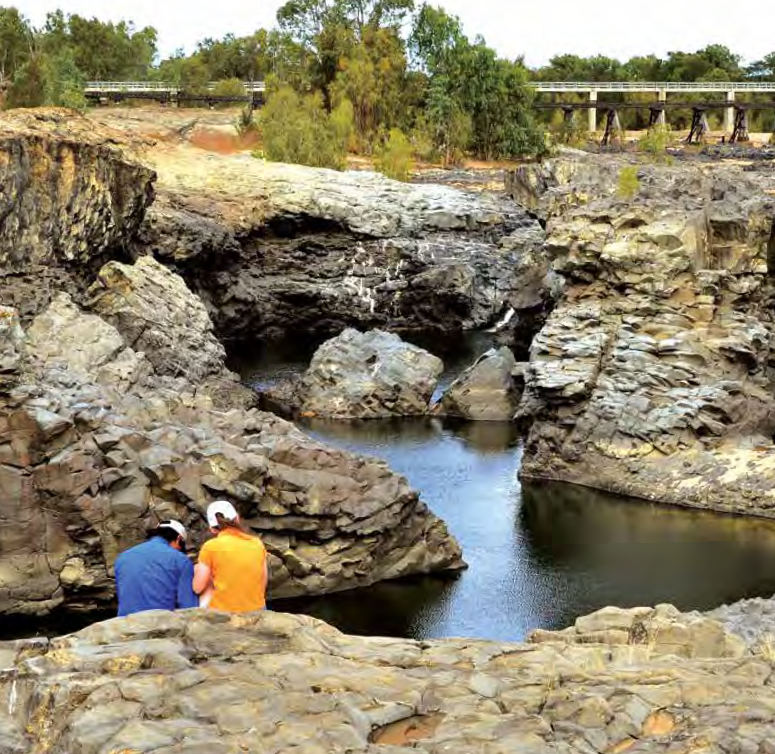 The camaraderie of fellow travellers met along the way will be long remembered. The roads were good to terrible — the most trying areas were where gibbers hugged sharp corners providing no warning of their presence. The corners also seemed to harbour the worst corrugations. We did go into 4WD for the long, deep stretches of bull dust, however, that was more for safety than necessity. Our usual speed was 80–85km/h on good surfaces and our average fuel consumption was 12.8L per 100km. Our vehicle carries 100L of diesel, 160L of water, 2 x100W solar panels and is fitted with light truck tyres.

We had no dust enter the vehicle, but Grant did clean all door and window seals regularly. The only damage sustained were stone chips  to our windscreen (taken care of with a windscreen repair kit), all received on tarred highways. Two internal blinds, which appear totally inadequate for constant use in dusty areas, gave us some trouble, but we experienced no tyre damage other than a worrying moment when Grant’s valve extensions worked loose on the Plenty Highway while I was driving. The obvious cause was my driving until the fault was identified and the extensions were promptly (and quietly) dispensed with.

On our way home through Ballina, Horizon replaced the blinds and attended to a few anchoring brackets to cupboards that had popped their covers. Once again, we were impressed with Horizon’s professionalism and no fuss attitude to the job at hand.

Our next trip on roads less travelled? Who knows. Maybe the Great Central Road before it is completely sealed.

Near Chillagoe in Queensland