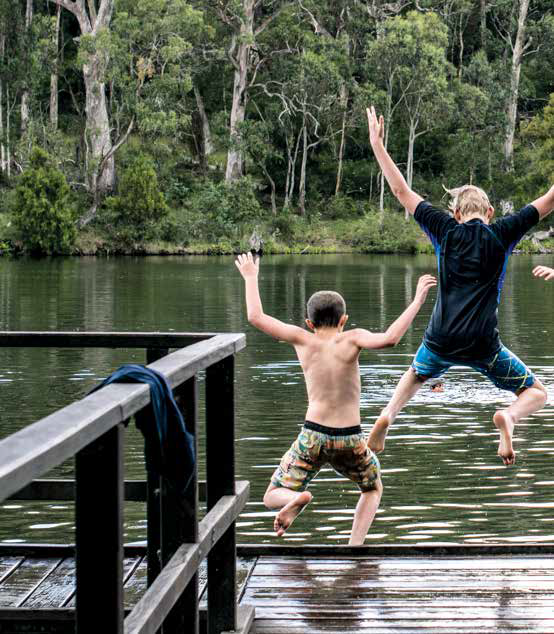 It’s always a delight when you discover something ‘unknown’ about a place you’re visiting – something completely unexpected.

The NSW town of Tamworth, famed for the annual Toyota Country Music Festival each January (see our breakout box below), is such a place. The festival is a swarming, fabulous time of year to visit, but it can somewhat overshadow the town’s rich heritage that’s begging to be explored at other times.

“The Peel Valley area was first visited by European explorers in 1815. Over the years, thanks to industries including mining, brewing, milling and agriculture, Tamworth grew to become a major regional centre. It’s a destination of beautiful contrasts. A place to showcase rich heritage while embracing the future and the wonderful opportunity it holds for a growing and vibrant region.”

Here we take a walk down memory lane to learn more about the region’s history from its goldrush days, agricultural prowess and pioneering electricity feats. 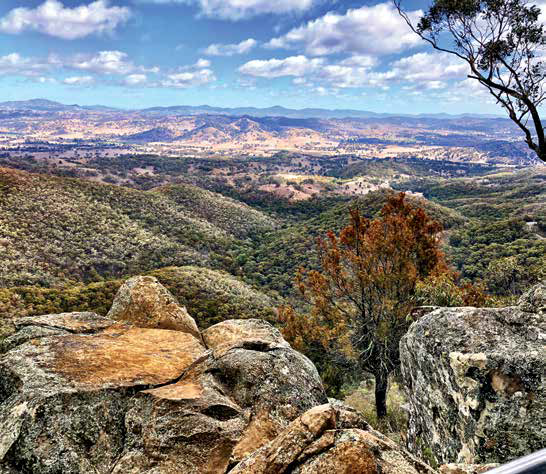 LET THERE BE LIGHT

Tamworth’s ‘other’ claim to fame is quite, well, illuminating. It is the first town in Australia to be lit by municipal electric street lighting. Picture this: It’s November 9,1888, and the town’s thoroughfares have been brightened by gas lamps for several years, but some forward thinking Council members have been inspired by the launch of electric streetlights in Paris in 1877, and have finally convinced the town to follow suit. No other town or even major city in Australia has done so until now (and Sydney would have to wait another 15 years).

Elizabeth Piper, wife of mayor James Piper, turns a tiny gold key and 52 retro-fitted lights along 21km begin to cast their glow, making history as they did so.

These days, you can explore Tamworth’s electrifying history at the Tamworth Powerstation Museum, where the refurbished 1907 Power Station building showcases the 1888 John Fowler steam-driven engines which powered the lighting system — the only ones of their type in the world. The dedicated volunteers who run the museum have also amassed a pretty incredible 9500 items heralding the introduction of electricity to our daily lives. There are hair dryers, iceboxes and kettles to more industrial machinery on display. 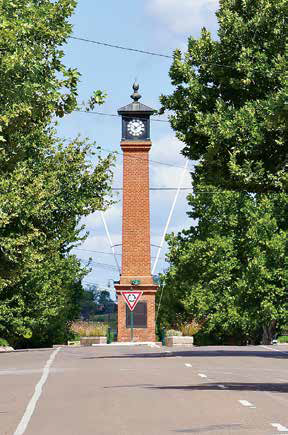 Museums are the best way to learn more about the days of yore — and, in addition to the Powerstation Museum, there are plenty to choose from.

Of course, no visit to Tamworth is worth its salt without a stop in at The Australian Country Music Hall  of Fame. Check out memorabilia from the pioneers of country music as well as current and emerging stars via the interactive Walk a Country Mile display.

The Powerhouse Motorcycle Museum has a private collection of more than 50 motorbikes from the 1950s to the 1980s, all still ready to ride. Admire Ducati, Triumph, Honda, Velocette and Laverda models with the highlight a rare limited edition F4 MV Agusta Series ORO.

For a peek inside the late Victorian era, visit Calala Cottage, built in 1875 by the town’s first mayor Philip Gidley King. Furnished with clothing, portraits, photographs, furnishings and machinery and offering a complete pre-gas 1800s kitchen, there are also Indigenous artefacts on display.

There is another original building on the site; the shepherd’s hut. This slab building from about 1840 is best known as Tamworth’s oldest surviving building and which was used to house the shepherd who kept an eye on the sheep.

The town also has a significant war history, and there are many memorials and monuments in town which pay respects to fallen service people. ANZAC Park honours WWI and WWII soldiers, The Man-OWar Gates, originally from the Man O’ War steps on Sydney Harbour stand at the entrance to the WWII Memorial in Bicentennial Park, plus the Gipps Street Memorial Avenue of Honour, Royal Australian Air Force Memorial and the anchor from H.M.A.S Tamworth is in Bicentennial Park. 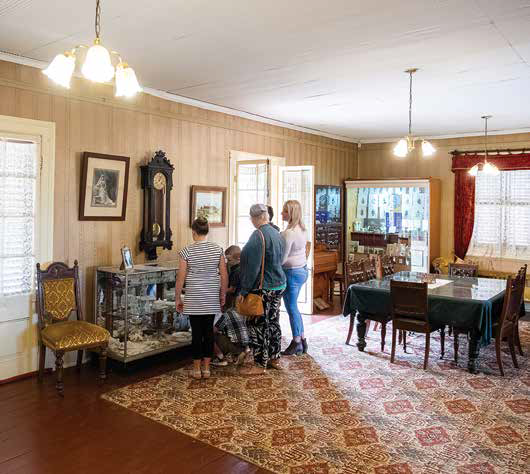 Tamworth resident Alison Edwards knows more than her fair share of Tamworth’s history — she and her family have helped to create it.

Her parents bought the Walls Caravan Park, as it was then known, in 1982, and promptly decided they needed a new name that started with an ‘A’ – that meant they would be first on the list in the Yellow Pages.

“My grandfather is Martin Austin, my dad is Frank Austin and my brother is Phillip Austin and his oldest boy is Henry Austin and we have an Austin 7 car so that’s how it came about,” she said.

The Park has 60 beautiful riverfront spots and no site is further than 50m from an amenities block. Facilities include a camp kitchen, laundry, pool, and barbecue, and pets are welcome.

Edwards says Tamworth has grown to be a large place over that time, but has retained its country vibe.

“I think it is just one big warm, friendly town,” she says. “Everybody I ever talk to says it is big, the whole region is just over 60,000, but I don’t think that takes away the country people we are at heart.”

Edwards acts as somewhat of a local tourism advisor to her guests, and while she sends them to various museums, to the Tamworth Hotel for a good steak or out of town to visit some of the smaller surrounding communities, she has one hot local tip for visitors.

“I always say to people we have the world’s best located lookout,” she says. “It’s called Oxley Lookout and at the bottom of it is a chicken and chip shop and a Liquorland. So what you do is wait until it is almost dark, you go and get chicken and chips, a bottle of plonk, take your wife up there (it is very romantic) with your camera  and take a beautiful shot over the lights of Tamworth.”

Nundle has a terrific gold mining back story. Once a boom town during the 1850s, it was home to thousands who flocked there to try and strike it rich.

“The Mount Misery Gold Mine Museum & Cafe preserves this time,” says Pengilley. “You can walk through a disused mining shaft and view tools and machinery, photos and newspaper clippings; you might even see the ghost of Cranky Jack, who struck gold but died in the mine before he could cash in (or so the story goes).”

Fancy a swish with a goldpan to try to find a nugget of the good stuff yourself? The area is great for amateur fossickers– the Nundle Information Outlet can help you out.

Only 10km away is Hanging Rock (not the one from the classic Aussie movie, but you could take a picnic here if you like …). This old gold mining village offers visitors a short heritage trail with a variety of monuments, buildings and signage as a reminder of its glory days.

Barraba is smack bang in the middle of the region’s agricultural landscape, but has more recently garnered a reputation as an artists’  hotspot thanks to its annual Frost Over Barraba Arts Festival. And this year’s launched an amazing silo art mural by Sydney-based artist Fintan Magee.

“You can’t miss the Barraba Silo mural, The Water Diviner, an impressive work on an incredible 40m high canvas at the southern entrance to the town on Manilla Rd,” says Pengilley.

“The mural also features a Regent Honeyeater bird with striking yellow and black plumage, an endangered bird that is one of over 190 species sighted in the Barraba district.” 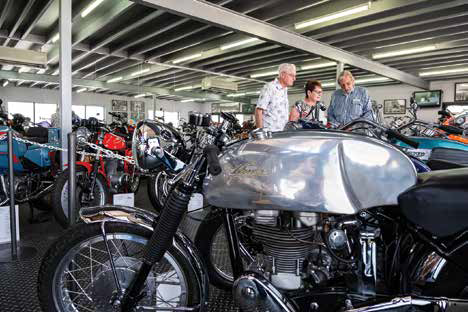 LOOKING TO THE FUTURE

Looking back at the past is one thing, but ensuring the longevity of future generations is another.

Tamworth and surrounding towns have not escaped the effects of Australia’s drought, and Edwards says there is a way travellers can help local farmers and small business people in the area.

“We are on level 5 water restrictions [in Tamworth] and if I say anything to your readers, it’s to get out there and support these little-drought-affected communities,” she says.

“You have no idea how somebody walking into a cafe and buying a coffee takes the pressure off everybody. If you need some supplies, drop into a small IGA into a smaller town like Barraba, Manilla and Nundle and get your supplies there. That little bit of money means a whole heap to them.”

Each year during the Country Music Festival, Edwards and her family hosts a welcome barbecue for guests featuring a local performer (for 2020 it will be musician Laura Duncan) and last year they partnered with local charity, Doing it For Our Farmers. They set up a pantry for donations, and by the time the festival was over, they had filled four D-Max ute trays with food and household items for struggling farmers and their families.

“I expected everyone to bring a couple of cans and packets of biscuits but we were overwhelmed,” she says. “I was really impressed by that.” 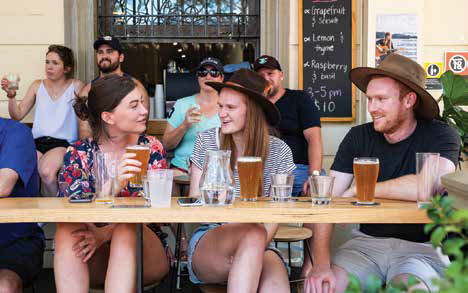 Since its inception in 1973, this festival has grown to become an iconic event on the calendars of music lovers across the globe. Over its 10 days, 700 performers will wow the crowds at a staggering 2800 events — many of them free.

It attracts some of the biggest names in music, with next year’s confirmed acts including Troy Cassar-Daley, Lee Kernaghan, The McClymonts, Sara Storer, Melinda Schneider and Adam Eckersley, Brooke McClymont and The Bushwackers. Cold Chisel will also join in the fun as part of the iconic Aussie band’s Blood Moon tour (with the Tamworth show including Paul Kelly, Kasey Chambers, Troy Cassar-Daley and Charlie Collins on the line-up).

“Tamworth is known as Australia’s ‘Country Music Capital’,” says Pengilley. “Country music is in our blood.”

She says that, over time, other attractions have sprung up to cement this reputation, including the Country Music Hands of Fame (established in 1977), the Big Golden Guitar (opened by Slim Dusty in January, 1988), Gallery of Stars Wax Museum (also opened in 1988), the Australian Country Music Hall of Fame, the Galaxy of Stars & Australasian Country Music Roll of Renown (at the Tamworth Regional Entertainment and Conference Centre), and the Country Music Pioneers Parade (located in Bicentennial Park).

The event has become somewhat of a bucket-list item for Australian travellers too, but those who don’t love country music will find a cool vibe. Toyota Park plays host to family-friendly and free concerts every night as well as a dedicated Family Zone with rides.

“You come for the atmosphere,” says Edwards. “It is 10 days of just flat-out fun, and 70 per cent of the shows are free. Bring a good hat and a bottle of water and you can stroll down the main street and there are buskers and free shows and all sorts of things.” 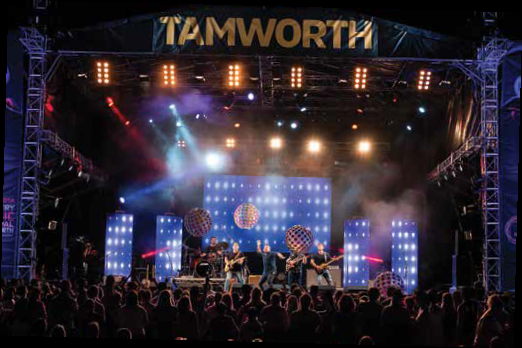 Tamworth is located 405km north-west of Sydney, 280km from Newcastle and 570km south of Brisbane.

Well known for its annual Toyota Country Music Festival, the region has a rich and diverse history that is well worth exploring over a week or more. There are many caravan and campsites in the area and there are two RV Friendly Towns nearby; Barraba and Manilla.

There are several caravan parks in Tamworth and surrounds: