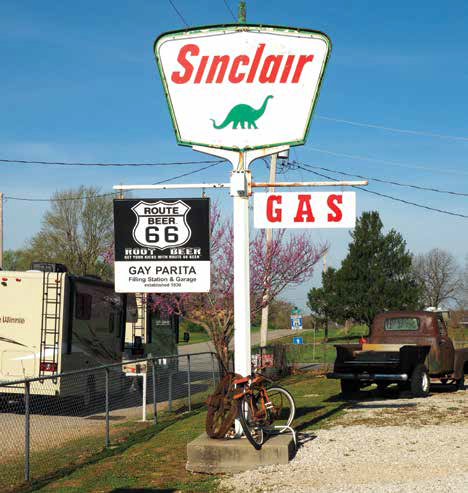 As this month’s column comes together, we are sitting in a little RV park at Tucumcari, New Mexico, in the US. Together with a small group of fellow Australian motorhome enthusiasts, we are making our way along the fabled Route 66.

Just in case you have only heard the name Route 66 but don’t really know much about it, we thought we’d use this column to give our readers a crash course in the US RV travel scene. Plus a bit of modern US history, as seen through the perspective of the automobile, and even a little bit of politics (but not much – we promise!).

Travelling from east to west, Route 66 makes its way across the US from Chicago, Illinois to Los Angeles, California. After leaving Illinois, it passes through Missouri, Kansas (briefl y), Oklahoma, Texas and New Mexico, before arriving in California.

Route 66 was born in 1926, when roads across the US were a motley collection of ‘motor trails’, unnamed roads and unpaved dirt tracks. Between the late 1920s and late 1930s – with the rise of car use – all that became a through-road of at least two lanes, comprising concrete, asphalt and in  a few places, brick roadways. In some places there were even four lane highways.

The ‘Mother Road’, as it became known, gave rise to a huge number of motels, gas (petrol) stations and in some cases, entire towns along the way. It was also a changing road with constant alignments and re-routes over the years.

As a road, Route 66 also played a part in what is known as the ‘Dust Bowl’ in the US. During the 1930s, large areas of Texas and Oklahoma, along with some parts of New Mexico, Colorado and Kansas, were over-farmed. During the long drought that followed, many farmers walked off the land and travelled via Route 66 to California, where they hoped for better things.

John Steinbeck’s The Grapes of Wrath is a good read that captures the hardships of the time – not only the drought, but also the Great Depression.

During WWII, when large number of troop and military hardware movements were necessary, certain shortcomings of Route 66 became obvious to the government. However, it was President Eisenhower who changed things. He initiated the Interstate Freeway System, otherwise known as the Interstates, which connected all the major cities in the US with a massive freeway system.

One effect of that was the closure of parts of Route 66, and in 1985 it was officially deregistered as a road system. Different sections became ‘business loops’ for the interstate, state roads, local roads or were simply abandoned.

Ironically, this deregistration kicked off the Route 66 Associations in various states and began a serious move to preserve and in many cases, enhance what was left. Thus was born Historic Route 66.

In 1999, President Clinton signed the National Route 66 Preservation Bill, which provided funds for preservation and restoration.

Today, as KEA Tracks is discovering, a considerable amount of Route 66 can still be traced out and if nothing else, it’s a good snapshot of life in America, particularly in the smaller cities and towns. Some parts of the old road actually follow the freeway and are known as frontage roads.

Research beforehand is essential and KEA Tracks can recommend two very good publications. One is EZ66 Guide for Travellers by Jerry McClanahan, which gives step-by-step directions, while another is Route 66 Road Trip by Candacy Taylor.

Having a SatNav loaded with Route 66 attractions is also very helpful – ours does a double ‘ping’ when something interesting is coming up. 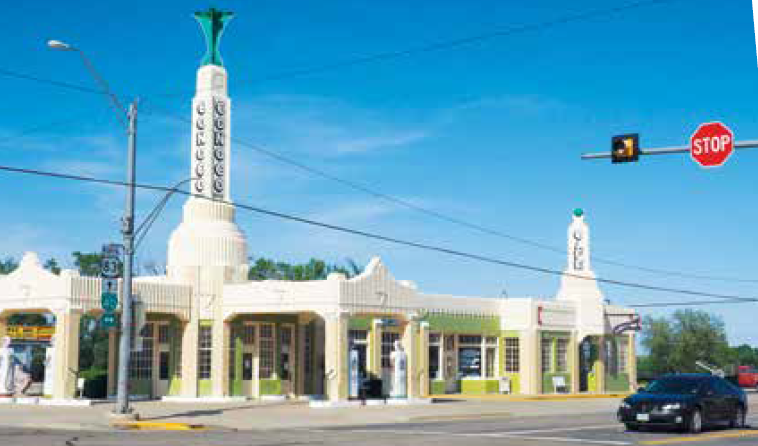 Historic Route 66 is very much a testimony to America’s addiction to the automobile in all its forms, and it’s very obvious from the considerable number of car-related businesses along the route. KEA Tracks lost count of the service stations, some fully restored, others now just decaying structures.

Both are equally interesting in their own ways, however, not to be missed is  the restored Art Deco Conoco service station at Shamrock, Texas and the equally fascinating ‘Hole in the Wall’ at Commerce, Oklahoma.

Nowadays, most former motels and diners are closed, but those remaining open have gone to considerable lengths to retain their original character, including the large flashing neon signs. A typical example is the Blue Swallow Motel here at Tucumcari, New Mexico.

Old bridges are also plentiful and there’s a considerable number of different styles.

Towns like Cuba, Missouri and Davenport, Oklahoma have a terrific range of murals painted on buildings, some of which depict the area’s history. 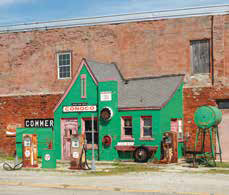 To date, KEA Tracks has had two favourite moments. One happened in the town of Gay Parinta (outside Springfield, Missouri). The restored Sinclair gas station was our destination, but right next door we discovered the owners had an amazing collection of Chevrolet Corvair cars and a beautifully restored GMC motorhome. This is the only motorhome ever built by a car/ truck manufacturer – a front-wheeldrive, six-wheeler. The Corvairs were equally amazing with their rear-wheeldrive, air-cooled engines.

Our other favourite was a discovery at the Jack Sisemore RV Museum in Amarilo, Texas. The business is actually a motorhome dealerership, but the collection of old caravans, teardrops and motorhomes is not to be missed by any RV enthusiast.

While a trip along Route 66 gives a great snapshot into life in the US, it’s not  always a pretty sight. Some towns along the way are almost deserted, and many have former businesses – motels, cafes and small factories – that have closed down.

It’s not hard to see why the ‘Make America Great Again’ message of President Trump has appeal to many Americans. Of course, how that might be achieved is another matter entirely.

Although it sounds an enormous motorhome, it’s not by the local standards, as evidenced in every RV park we have stayed in.

On the subject of RV parks, many do not have dump points as such. Each site has its own individual connection for electrical, water (mains pressure), grey/ black tanks and cable TV. The cassette toilet, very common in Australia, is much rarer here. It’s all about pump outs, not carrying!

Should you decide on your US own adventure, we should mention our US affiliate Road Bear RV (www.roadbearrv.com) has rental motorhomes available.

You’ll need about three weeks to cover the entire route, or less time if you decide to do it in sections.