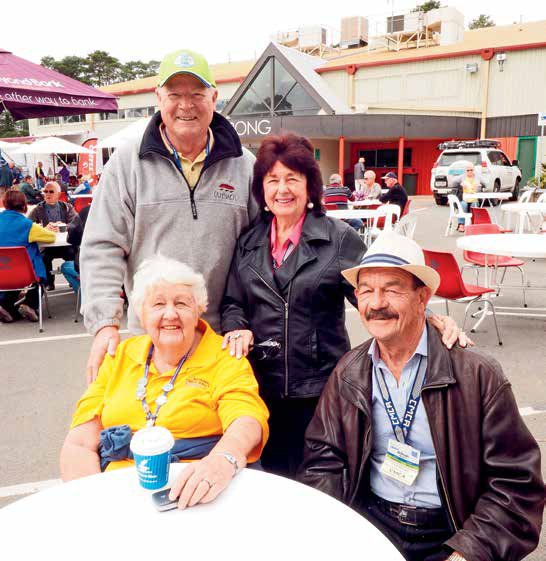 During the National Rally in Canberra last year, KEA Tracks caught up with former CMCA CEO John Osborne and his wife Lee.

John is now retired and enjoying the lifestyle he worked hard for during his time with the CMCA.

KEA Tracks took the opportunity to put a few questions to him, both about John’s time with the CMCA and what he’s been up to since then.

KEA Tracks: How long did you work for the CMCA?

John Osborne: My first day with CMCA was February 15, 1999. I started as the general manager, a position I held until 2009, when I was appointed chief executive officer (CEO) and remained in that role until I decided to semi-retire in August 2011.

KT: Prior to your time with CMCA, did you have any experience with the motorhome industry?

JO: I had had no direct experience with motorhomes, but certainly had  plenty of time enjoying the outdoor lifestyle. I did have a keen love of bush camping. Mum and Dad had a number of caravans over the years and I have wonderful memories of family holidays in Queensland and coastal NSW.

KT: So how did you find CMCA when you first started?

JO: I joined CMCA at a very exciting period in its history. The Club was just coming out of a period of internal turmoil and, while enjoying solid growth, was struggling financially. A new Board led by John Fillingham had just been elected and would prove to be instrumental in surmounting the Club’s past difficulties.

From day one I was acutely aware of the uniqueness of this organisation. Where else in Australia was there a group of around 18,000 individuals with an interest in, and indeed a passion for, experiencing their country in an RV.

By the time of my resignation in 2011, the Club was in a sound financial position with member numbers topping 62,000. While this was due in part to the arrival of the so-called baby boomers, it was also due to the hard effort put in by the Boards, the members and the Club’s staff during this period.

KT: What do you think were some of the highlights of your time with CMCA?

• Official opening of our new national HQ at Wickham (Newcastle, NSW) in early 2002.

• The transformation of The Wanderer from the small A5 format to the larger A4 fullcolour format.

• Being part of the team that made representation to government  and industry on behalf of our members and the benefits these efforts have achieved.

• The club’s 25th Anniversary Rally at Deniliquin, and especially witnessing the delight of the Club’s founders Don and Erica Whitworth (N001) when they were surprised by the unexpected attendance of their children, partners and grandchildren.

• The awarding of the Medal of the Order of Australia to Don Whitworth. Don’s OAM was awarded for service to the community, particularly through CMCA.

KT: It didn’t take long after retirement to join those other motorhome travellers you had been watching for so long did it?

JO: No, certainly not. During my 12.5 years with CMCA, I attended every rally. On several occasions I was fortunate to be able to attend in a KEA motorhome. While it was my wife Lee’s and my own dream to eventually own a motorhome, this happy circumstance was planned for after my retirement. And so it has finally come to pass!

We are now the proud owners of a 2010 KEA Dreamtime called ‘Ruby’, which we purchased in December 2015 on the day of our 40th wedding anniversary.

With my CMCA background, I was privileged to inspect literally hundreds of campervans, motorhomes and caravans. But having had first-hand experience with the KEA Dreamtime, we kept coming back to it.

JO: There’s no doubt that KEA has produced a robust RV for the rental market. Built on a Ford Transit chassis, it has been designed for a non-owner and with me not being all that mechanically tech savvy, it is a very forgiving and reliable home on wheels.

It has all the usual inclusions of a fully self-contained motorhome,  but differs from most in that it has huge windows that tend to bring the outside view inside which so appeals to us. It has seat belts for five which means we can treat our three grandchildren to a motorhoming experience and we have entertained up to six adults for dinner quite comfortably.

KT: So do you have any big plans for the future?

JO: Lee and I attended last year’s two rallies at Bathurst and Canberra and we are booked for Pontville in Tassie. It has been wonderful to attend the rallies and we enjoy catching up with old friends and making new ones.

KT: So far John has done all the talking, but Lee how did you find being married to the CEO of CMCA?

Lee Osborne: I believe it was a great experience for us both. Obviously, I did not get to all CMCA events, but working for CMCA allowed us to travel to places that I never expected to see. From our first rally in Townsville it immediately became apparent the sense of community and belonging shared by CMCA members.

KT: What did you discover about CMCA?

LO: Quite a few things really. Like for instance, hugs as a form of  greeting are the norm! I love the sense of community and oneness – sharing a common bond with other RV travellers, irrespective of jobs, background and previous life experiences.

I also love renewing friendships at rallies and when we meet while travelling. I have a definite feeling of instant relaxation when I am in the motorhome – life seems so simple.

KT: Earlier I asked John about his future plans, but I might put the same question to you Lee, what do you think?

LO: Well for a start, I would like to pack less. I think we all carry more than we need to. It also seems to me that we should keep enjoying this lifestyle and not take it for granted. Along those lines, I’m trying to be conscious of a healthy lifestyle, especially while travelling – my pedometer is my new favourite gadget. I’m including John here by trying to limit his visits to local bakeries to rate their sausage rolls and for both of us to enjoy Happy Hours in moderation. Finally, I’d like to add to my love of cooking, by incorporating new recipes while travelling. 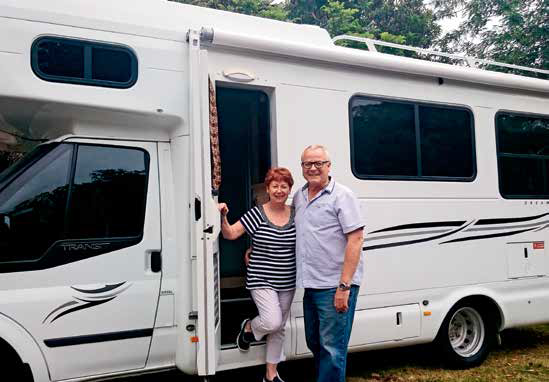