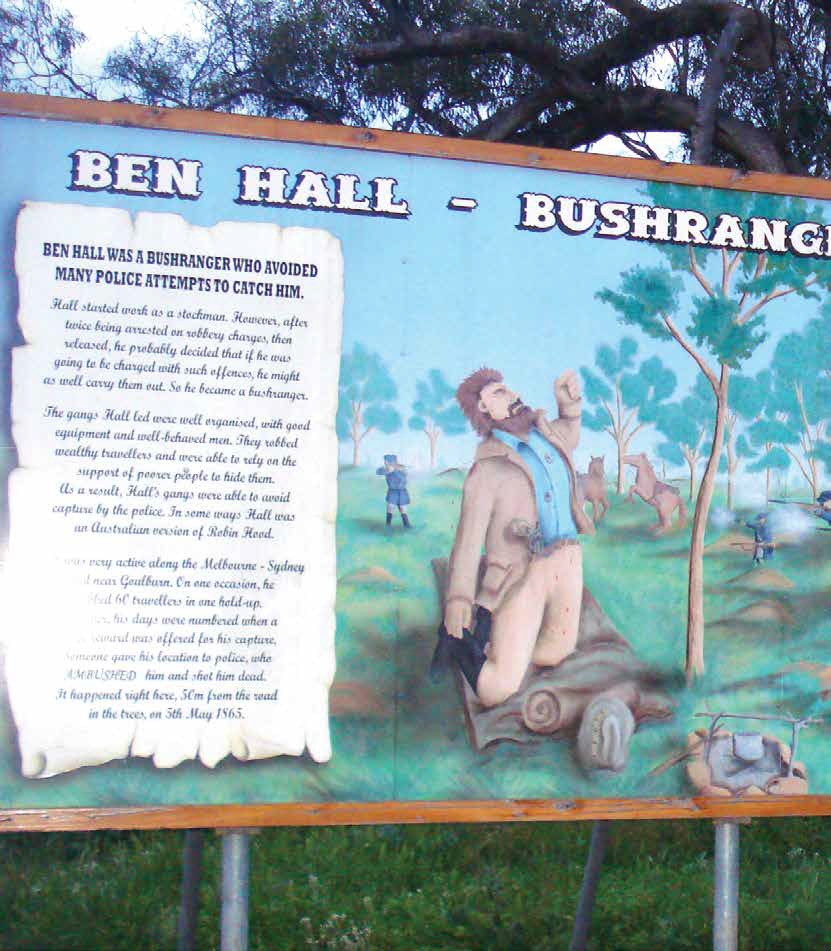 It was once reported that coaches crossed the Lachlan Plain – Ben Hall permitting! Today’s travellers will have no such hindrance. It is now more than 150 years since Hall and his gang of bushrangers ruled the roads throughout New South Wales, and travellers can now visit the sites of their escapades and take part in historic commemorations.

There are numerous towns in NSW that can claim links to the life and times of Hall and his gang. You can find connections to the bushrangers in country centres such as Bathurst, Carcoar, Goulburn, Young and Grenfell. In 2012 the Eugowra community staged a festival around the sesquicentenary re-enactment of the Gold Escort robbery. Orange held a commemoration for Constable William Haviland, a police officer who was killed in the line of duty in a freak accident related to the robbery. In September 2013, Bathurst commemorated Hall’s raid on that city and a month later, the people of Canowindra commemorated the bushranger’s raids on their town. In November 2016 the movie The Legend of Ben Hall, had its world premiere under the western stars in Forbes Showground.

But one community can claim more ownership than the others; Forbes – the final resting place of Ben Hall. 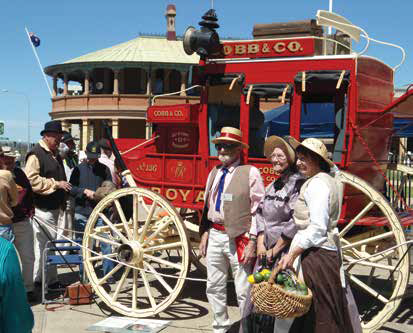 Forbes is the town that is home to the final chapter of the bushranger’s story which began in the Hunter Valley with his birth around 1837, most probably in East Maitland. The Hall family later moved to Murrurundi where the site of the family home can be seen, as well as the grave of Hall’s mum, Eliza, in Murrurundi cemetery. She died in 1869, outliving her notorious son by four years.

When Hall was in his teens some of the family moved to the Lachlan district for work. Most of the family eventually returned to the Hunter but Hall stayed on, marrying Bridget Walsh and taking up property with a partner at Sandy Creek, south of Forbes.

The site of his former home is marked by a sign at the intersection of Sandy Creek Road and Ballendene Road, 35km north-west of Grenfell. Walk through the  gate and a rough track leads down to another sign at a home site in the valley. Current research suggests that this may have been the home of Hall’s partner John McGuire. Hall’s home may have been closer to his stockyard site located in the open paddock on the left of the intersection if travelling from Forbes, on the opposite side of the road to the marked site. A small roadside sign shows the direction to the stockyard site, but there is no public access. 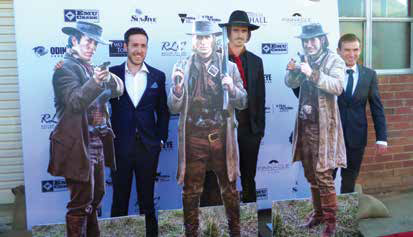 The cast of the movie, The Legend of Ben Hall, at the world premiere in Forbes Showground in 2017

Although Hall and McGuire were making a good living selling cattle to the miners at nearby Young and Forbes, Hall fell in with shady characters such as Frank Gardiner, a bushranger of Scottish descent who had emigrated to Australia as a child.

Hall was accused of helping Gardiner with the robbery of William Bacon’s drays from a property south-west of Forbes and was arrested at the Wowingragong racetrack. He was acquitted due to lack of evidence. The site of the racetrack and arrest is marked by a small roadside plaque south-west of Forbes on the Newell Highway, and makes for a  suitable bush rest stop. Two caravanners recently pulled in there for the night and didn’t realise the significance of the site until they discovered the plaque the next morning. 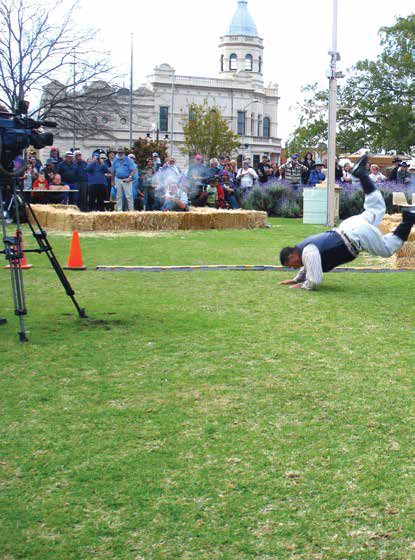 At the Forbes Ben Hall Festival, members of the Lachlan Living History Group re-enact the death of Ben Hall

In 1862, Hall was involved in a much more notorious crime – the biggest robbery in colonial history. On June 15, Hall joined Gardiner and six others in attacking the Gold Escort coach in a gully near Eugowra Rocks as it travelled from Forbes to Orange. The bushrangers fired on the coach without warning, wounding some of the troopers guarding the gold, and causing the coach to roll.

The bushrangers made off with banknotes and 2,700 ounces of gold worth more than £14,000. The site is well marked and includes a picnic area, and only a short walk to the rock. Eugowra is a brief drive east of Forbes and the robbery site is 4.6km from Eugowra along the Escort Way. Walk through the gate and up to Escort Rock where the attack took place. It is easy to feel the spirits of the past in places like this.

While in Eugowra also visit the Historical Museum and Bushranger Centre as well as quaint shops and cafés.

Loaded with treasure, the bushrangers headed south towards the Weddin Mountains. They paused on Wheogo Hill, not far from Hall’s home site at Sandy Creek, to divide the loot. It was here that they were discovered by pursuing police, and while some of the bushrangers were eventually captured and one was hanged, Hall escaped and turned to a full-time life of crime.

Wheogo Hill can be seen from Deaths Lane which runs southward to the Mid Western Highway near Piny Range. Nearby is the site of the Walsh homestead, where Hall’s in-laws lived. 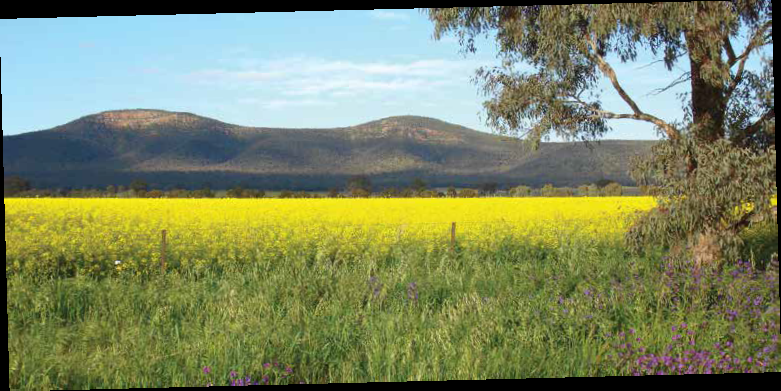 Westward of Grenfell is the Weddin Mountains National Park. This was a haunt and refuge of bushranger gangs of the 19th century but modern folk can still feel the isolation and natural beauty of the area by camping in either Holy Camp or Ben Hall’s Cave camping areas. The latter is the pick of the two. It has shady camping and parking nooks suitable for vans, trailers or motorhomes. There are toilets, water, tables and picnic shelters. This is a bush site so no  power is available, and no fee is required. Short walking tracks lead to Ben Hall’s Cave, Seaton’s Farm and up onto the ridge for magnificent western views. Longer walks into the heart of the range are also available. 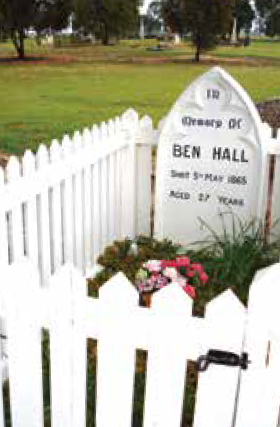 Throughout 1863, Hall and his gang committed crime after crime, bailing up travellers and mail coaches, attacking homesteads, fighting off mounted troopers and raiding towns around Bathurst. The bushrangers raided the town of Canowindra twice, the second time in October 1863 and stayed for three days. The focus of the raid was Robinsons Hotel in the main street. Today the Royal Hotel is on the site and has bushranger displays inside.

In 1951 a plaque to commemorate the raids was installed at the wrong site. It is still interesting to visit the plaque by crossing the pedestrian swing bridge over the Belubula River behind the main street buildings.

The reign of terror continued through 1864 into 1865. Police, innocent citizens and bushrangers were wounded or lost their lives in fierce gun battles and raids.

On May 5, 1865, the law finally caught up with Hall when he was ambushed and shot dead by a party of police from Forbes at a place called Billabong Creek. It is thought that he and the two remaining gang members, John Gilbert and John Dunn, were preparing to leave for Queensland, possibly visiting Hall’s family in the Hunter on their way.

The site of Hall’s lonely camp where he met his demise is marked by a large roadside information sign. A short walk leads to a plaque in a grove of trees where his body was riddled with police bullets. This is an isolated and lonely site on the vast Lachlan Plain.

Take the Bogan Gate-Tullamore Road from Forbes. Turn left into Yarrabandai Road and then right into Yarrangong Road. Turn right into Ben Halls Road and continue 6km to the site.

Hall’s body was brought back to Forbes and buried in unconsecrated ground outside the cemetery in Bogan Gate Road. Today the cemetery has expanded and taken in the bushranger’s resting place. The grave is marked with a headstone, fence, landscaping and historic plaque, describing other nearby bushranger burials. When he was killed, Hall was two days short of his 28th birthday.

Gregory Powell is the author of Bushranger Tracks, published by New Holland in 2016.

Footnote: Forbes is a rich primary producing area in the Central West of NSW. The town is 360km west of Sydney mostly along the Great Western Highway and 772km from Melbourne along the Newell Highway. For more information, contact Forbes Railway Information Centre – Railway Station, Union Street,Forbes. T: (02) 6852 4155, www.forbes.nsw.gov.au

An excellent free short-term rest area for self-contained RVs is available on the scenic banks of Lake Forbes on Junction Street near the showground. A free dump point is available at Forbes Shire Council’s sewer treatment works off the Newell Highway, heading south out of town.

Parking in the town centre is catered for long vehicles in Lawler Street parallel to the main shopping area in Rankin Street. Gooloogong, south of Eugowra, has a small free caravan park in the centre of the village. Hotel meals are available across the road.

Nangar National Park, near Eugowra. Some steep dry creek crossings may be tricky for trailers.