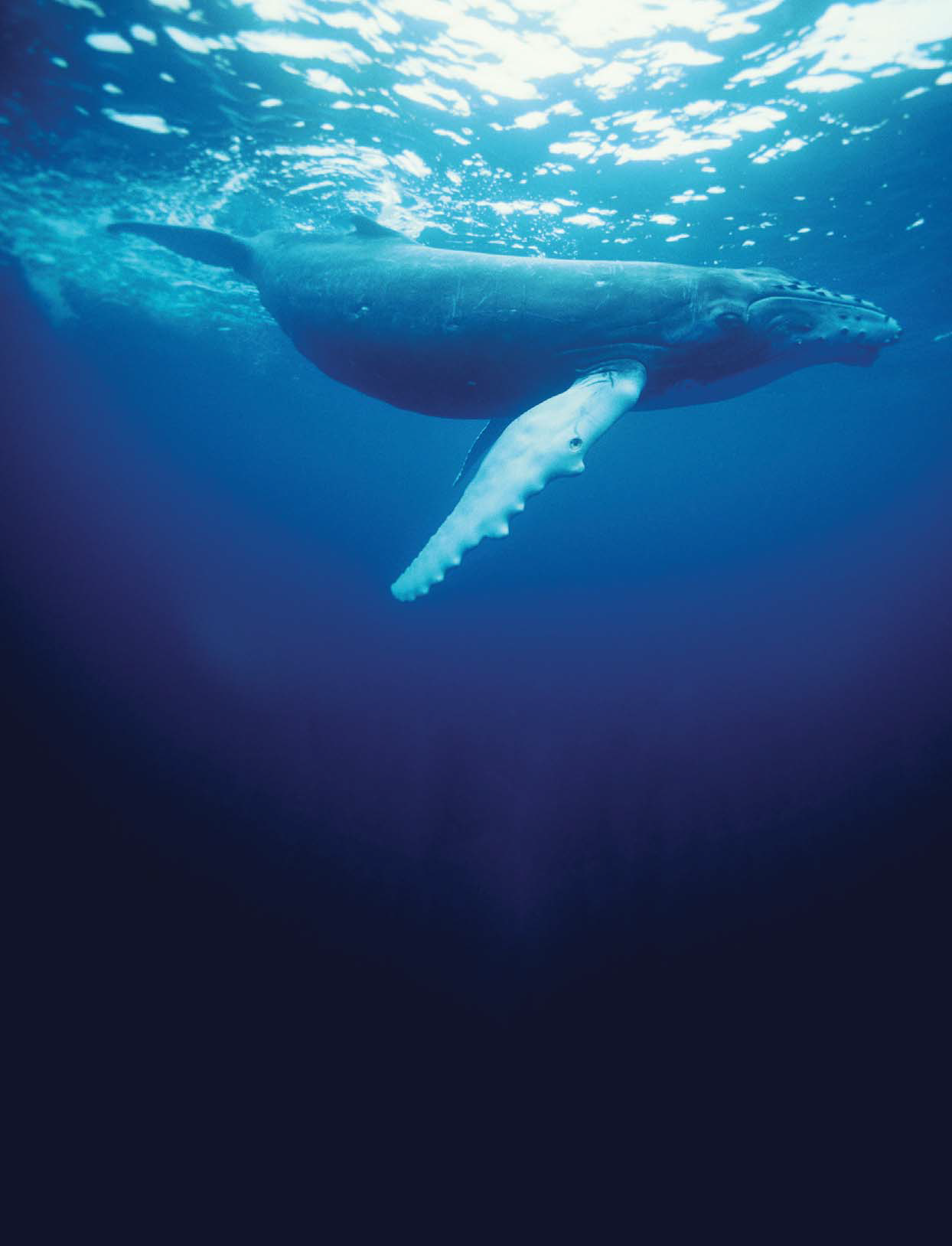 Australia has at least 45 species of whales, dolphins and porpoises, as well as seals, sea lions and dugongs (or seacows) as resident or visitors. Once we used to hunt these creatures for oil, bone and blubber, but now we’re keen to get close and try to understand these magnificent creatures.

Whales fatten up in southern waters, then swim up Australia’s east and west coasts for the winter. The migration north starts in autumn, with peak viewing time for the Australian coast mid-winter. Of course, they have to swim back south again after calving, so we can get a second look at them in spring as they return to the feeding grounds with calves in tow. Humpbacks tend to go further north, and can be seen into far-north Queensland and Broome by the peak of the cycle in September.

Whales might be exciting to watch as they breach the water or move in packs through the deep, but dolphins are often more exciting, because you can get much closer to them. There are exclusion zones around whales and dolphins for their safety as well as ours. Last year a whale came into Sydney’s Bondi Beach and everyone was very excited. That is, until it flicked its tail and surfers went flying – one was actually knocked unconscious. The zones exclude boats and jet-skis to 100m away from whales, or 300m if the whale is with calf. Divers or swimmers can’t go closer than 30m. For dolphins, boats must stay 50m away, 150m if a calf is present. 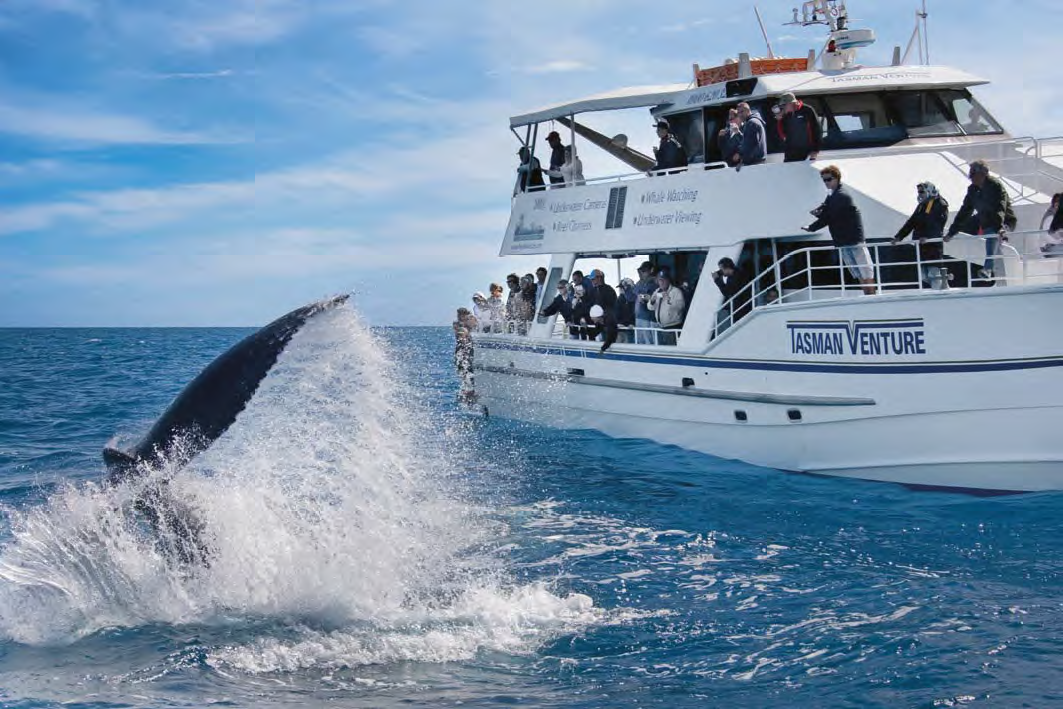 Getting mugged: a tail flick surprises a boatload of visitors with sea spray - Tourism Queensland

As well as their forays into Sydney Harbour and Bondi, marine mammals can be spotted all over New South Wales, often with calves in tow. There are many ways to experience these great  animals, including whale watching from land and sea, dolphin cruises and swimming with seals. There are prime whale watching opportunities up and down the east coast, especially during the annual migration from May to November. Great whale watching spots in Sydney include Kurnell, Barren joey Headland, Bradley’s Head in Mosman and Manly’s North Head.

You can grab your binoculars and scan the seas at North Head Lookout in Manly and Cape Solander on the southern side of the Botany Bay entrance. Or hike around the harbour – whales have been spotted on the Federation Cliff Walk, the Bondi-to- Bronte Walk and the Manly-to-Spit Walk.

Other spots south of Sydney include Stanwell Tops near Wollongong, and if you head down the coast you can look out for whales at the Kiama Blowhole, Gerroa in Seven Mile Beach National Park (NP), Jervis Bay’s Booderee NP, Beecroft Peninsula, and Culburra, Bateman’s Bay and Ulladulla on the far south coast. Whale enthusiasts are spoilt for choice north of Sydney in Newcastle and the Central Coast and whales are often sighted at locations such as Terrigal Skillion, The Entrance, the Bush Street Reserve Norah Head Lighthouse, Soldiers Beach in Toukley and Crackneck Lookout in Wyrrabalong NP.

Migrating whales are often spotted on the mid north coast from the bays, beaches and foreshores around Port Stephens and Forster. Other spots include Lighthouse Beach at Port Macquarie, Crowdy Head at Crowdy Bay NP, Woolgoolga Headland on the Coffs Coast and Muttonbird Island Nature Reserve in Coffs Harbour. Further north you can also see these wonderful creatures at the headlands at Ballina, Lennox Head and Byron Bay’s Cape Byron. 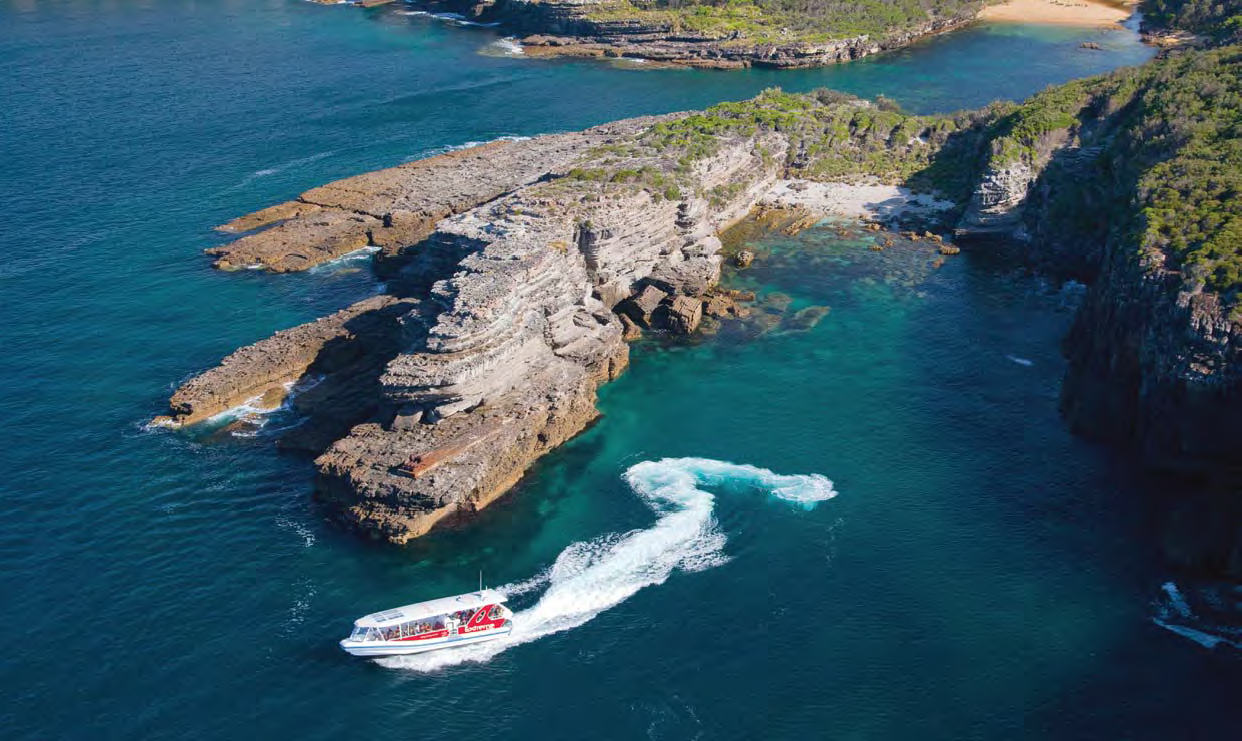 Unlike whales, dolphins can be viewed year round at many spots including Port Stephens, Byron Bay and the NSW South Coast area of Jervis Bay. Bottlenose dolphins are a relatively common sight along the entire NSW coastline and they can often be seen in bays and estuaries opening to the sea, and also ‘surfing’ in waves as they are forming and breaking.

There are two types of fur seals found in NSW waters, the Australian fur seal and the slightly smaller New Zealand fur seal. Over the past few years, the sighting of seals in the Port Stephens-Great Lakes Marine Park appears to be on the increase and sightings have also been reported around Broughton Island and Seal Rocks. Leopard Seals have also been spotted lazing around on the NSW far south coast before returning to the Antarctic closer to summer.

The amazing dugong species is unique among marine mammals as being almost entirely herbivorous. Often referred to as sea cows because they graze on sea grass, dugongs can grow up to three metres in length and weigh as much as 400kg. 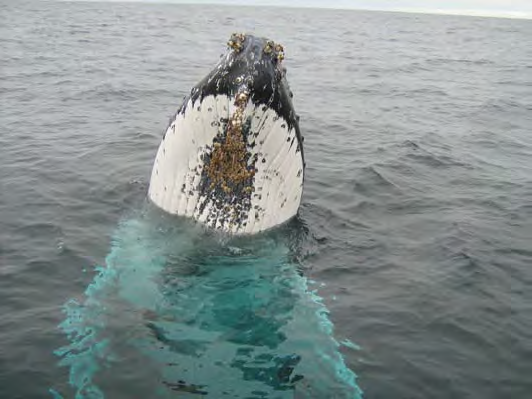 Some of the operators who can help you see marine mammals include Dolphin Watch Jervis Bay, which offers a range of cruises to spot dolphins and seals all year round and whales from May to November in the pristine waters of Jervis Bay (www.dolphinwatch.com.au). Also in Jervis Bay is Dolphin Wild Cruises with purpose-built vessels to view dolphins, whales and other sea life from a new perspective including the use of underwater viewing windows (www.dolphinwildcruises.com.au).

Go Sea Kayak at Byron Bay offers the opportunity to kayak near dolphins and whales or snorkel over hidden volcanic reefs in the Cape Byron Marine Park. It is owned and operated by local surf lifesavers and tours include all equipment, wetsuits, morning tea and transfers to and from Byron Bay accommodation (www.goseakayakbyronbay.com.au). 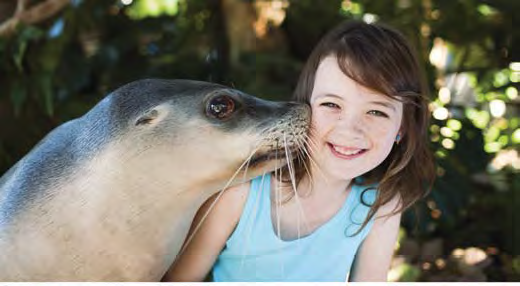 Coffs Harbour is the southern gateway to the Solitary Islands Marine Park and the Jetty Dive Centre runs daily dive charters for snorkellers or divers to the islands to see tropical fish, turtles, sharks and whales in season (www.jettydive.com.au).

Moonshadow Cruises offers scenic dolphin and whale watching cruises that depart from Nelson Bay including lunch and dinner cruises to Broughton Island National Park. Its Newcastle to Port Stephens Cruise departs early afternoon in the heart of the Newcastle waterfront on the first and third Sunday of each month from December to May. It passes Birubi Point and as the boat enters Port Stephens, visitors have the opportunity to see the local bottlenose dolphins and huge pods of common dolphins (www.moonshadow.com.au).

The Gippsland region of eastern Victoria is a great place to see humpback and southern right whales. The best spots are Cape Conran and Point Hicks Lighthouse as the whales pass on their way to the Antarctic between July and November. It’s not just whales, however. You can also see dolphins feeding every morning along the coastline at the Gippsland Lakes which includes Lakes Entrance, Metung and Mallacoota. Seals can be found at Wilsons Promontory, Cape Conran and Beware Reef at Lakes Entrance. 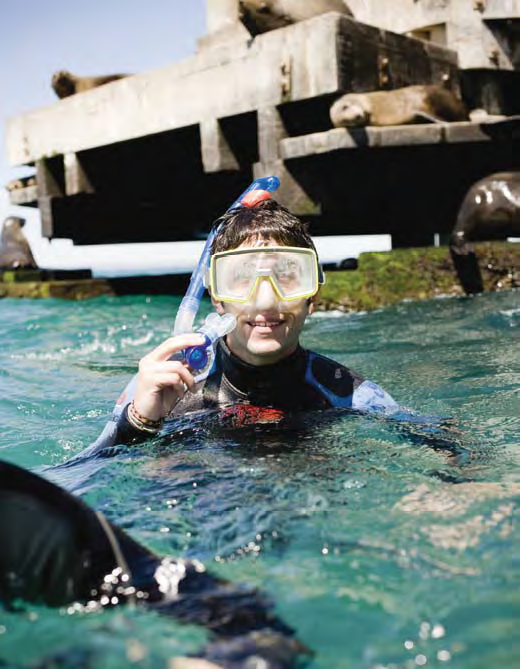 Getting close to the seals - Tourism Victoria

All of the above can also be seen along the Coastal Wilderness Walk in East Gippsland. Extending more than 100km from the Sydenham Inlet at Croajingolong to Wonboyn in NSW, the Wilderness Coast Walk includes wide open beaches and small coves with rocky headlands, river estuaries and coastal heathlands. The entire walk is 45km one-way and takes three to four days to navigate, but can be accessed from several locations along the coastline by 2WD cars. These locations include Thurra River, Wingan Inlet, Mueller River and Shipwreck Creek. Other places in Victoria to see seals and other sea mammals include Sorrento on the Mornington Peninsula and Phillip Island.

MEETING MINKES AND OTHERS

Dwarf minke whales can be seen between May and August in tropical north Queensland in what scientists believe is their place of courtship and mating. A number of operators in Cairns and Port Douglas have permits to take tourists on a swim-with-whales  experience. These include Minke Whale Tours and Eye-to-Eye Marine Encounters (www.minkewhales.com.au) and Mike Ball Dive Expeditions (www.mikeball.com).

One of the delights of a visit to Moreton Island, off Brisbane, is Tangalooma Island Resort’s (www.tangalooma.com) nightly dolphin feeding, where a pod swims in close to shore to meet and be hand-fed by visitors. Further north, at the Sunshine Coast’s Tin Can Bay, you can visit the Barnacles Dolphin Centre which also allows tourists the opportunity to interact with wild Indo-Pacific humpback dolphins (www.barnaclesdolphins.com.au).

Hervey Bay is the reportedly the mugging capital of the world. A large number of humpback whales are seen here as part of their annual voyage to the Great Barrier Reef, and Hervey Bay is the only area in the world where humpbacks consistently approach vessels and ‘mug’ (circle) the boat. A number of operators take guests out into the bay to see the majestic giants in action such as Blue Dolphin Marine Tours (www.bluedolphintours.com.au).

Monkey Mia is one of the few places where you can be very close with dolphins. Located on a unique section of World Heritage coastline 30 minutes northeast of Denham, WA, it has been home to an interaction between humans and bottlenose dolphins since the early 1960s.

Every day dolphins swim into the clear shallows of the bay to delight visitors. As the dolphins are wild, numbers and the  exact time of their visit vary; however, they usually visit the shore several times a day – more frequently in the mornings.

There are also wildlife cruises and scenic flights into the Shark Bay or Ningaloo marine parks departing from Monkey Mia, Denham, Coral Bay and Exmouth, and the opportunity to discover the delightful dugongs of Western Australia. Dugongs are found in Shark Bay and Ningaloo marine parks, supporting 10 percent of the world’s dugong population. Unlike other marine mammals, they cannot hold their breath under water for very long, so they can often be spotted coming to the surface for air. Flinders Bay near Augusta is a good place to see whales. 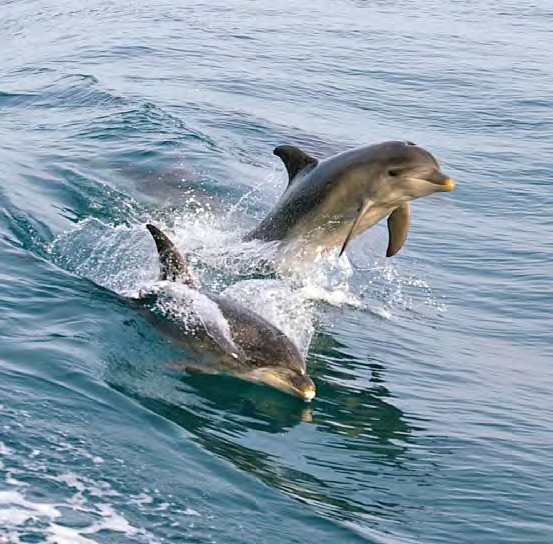 Dolphins playing in the wake of a boat - Tourism NSW

As an island state with numerous smaller islands that make a combined coastline of more than 3000km, Tasmania has the luxury of enjoying abundant marine wildlife close at hand.

Seals and dolphins are often found playing around the shores and visitors can sometimes view southern right and humpback whales. Orcas, pilot whales  and varieties of beaked whales can also be present. A growing proportion of the population are giving birth in Tasmanian waters. If you encounter a stranded whale you should contact 0427WHALES to report it. It’s also helpful to report any whale sightings in Tasmanian waters so they can collate the data, and even any strange or unusual marine mammals.

Australian and New Zealand fur seals are abundant around Tasmania. The multi award-winning Pennicott Wilderness Journey’s offers cruises out to Tasman and Bruny Islands, allowing visitors to see them up close. Elephant and leopard seals breed far to the south of Tasmania and sometimes individuals migrate to Tassie to rest. People assume the seal is sick or injured, however, often the seal is just resting and will head south after it has concluded its warm ‘holiday’. Each year on average three elephant seals are reported and an average of five leopard seals visit the coast of Tasmania.

Wineglass Bay Cruises offers trips out to check out whales and dolphins along the east coast with the help of their dolphin-spotting dog named Rastus (www.wineglassbaycruises.com). 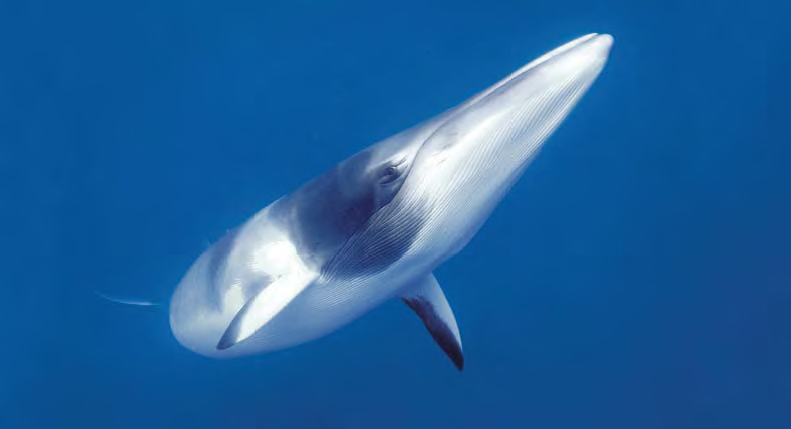 Minke Whales can be seen in Queensland - Tourism Queensland

Among the larger species of baleen whale, southern right and humpback whales can be seen at east coast vantage points such as Frederick Henry Bay and Great Oyster Bay. While most species migrate some distance off the continental shelf, the humpback and southern right whale come sufficiently close to the coast to allow regular sightings from land. Humpbacks in particular provide great viewing spectacles with large fluke displays and breaching. Facebook sites have been set up to allow locals and visitors to track their movements downthe coast including: https://www.facebook.com/BichenoWhaleAlert.