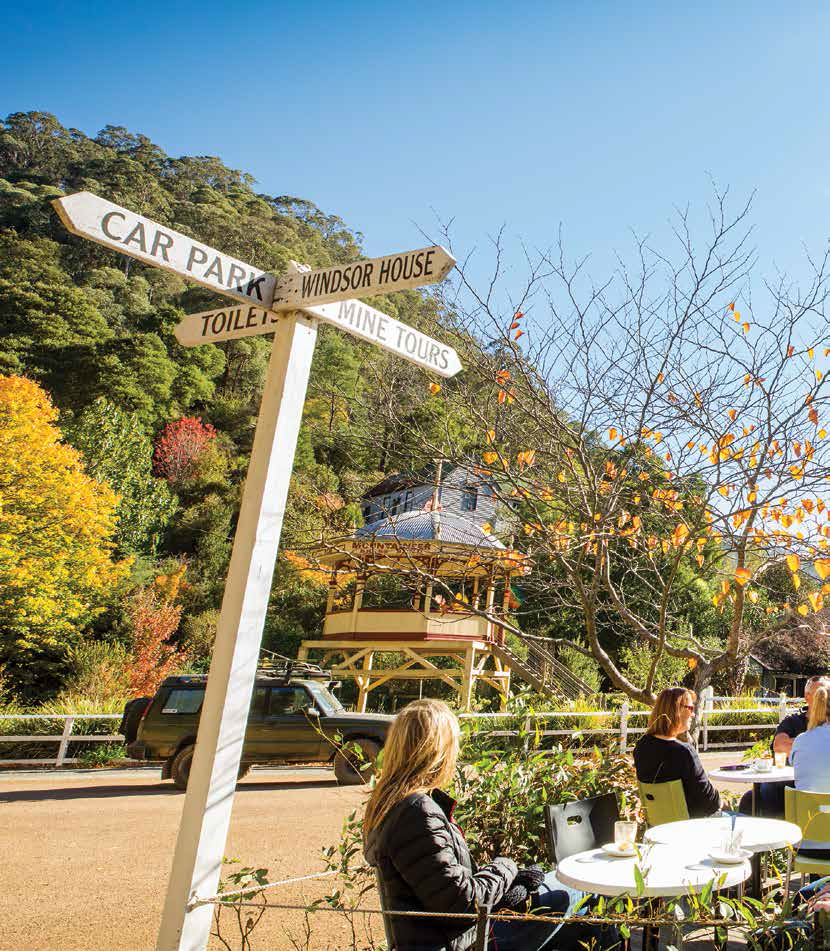 Travel destinations are rarely a one-size-fits all affair. There’s always rivalry over the ‘ideal’ holiday destination among travel companions, whether it’s the coast, the mountains, cosmopolitan regional centres, or remote hideaways.

However Victoria’s Baw Baw region, around 90 minutes from Melbourne, can lay claim to being able to satisfy most interests thanks to its rich foodie reputation, art galleries and shopping experience, glorious national parks as well as access to affordable  skifields in winter and bushwalking in spring and summer.

Here we explore two opposite ends of the Baw Baw spectrum for visitors – the bustling township of Yarragon and the more remote areas encompassing tiny towns of Erica, Rawson and Walhalla which serve as the jumping off point for scores of nature-based experiences. 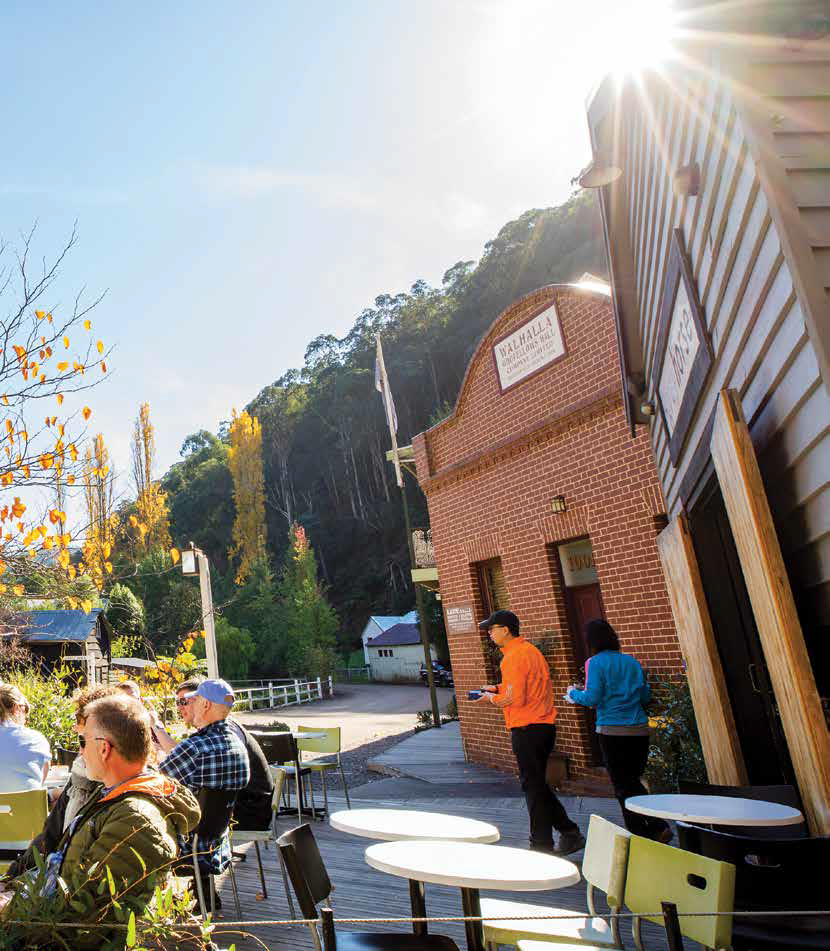 The township of Yarragon is conveniently located on the Princes Highway between Warragul and Trafalgar, and is bursting with antique and craft shops, cafes and produce stores stocked with local delicacies, as well as galleries showcasing a myriad of artworks.

Yarragon Village is a great place to wile away a few lazy hours meandering in and out of shops selling everything from handcrafted jewellery, knitwear, vintage clothing, books, lollies, Australiana-styled tea towels and so much more.

The town’s historic lineage is very much a central feature, along with more modern buildings that have appeared as increasing numbers of visitors stop and take the time to explore. The Yarragon Hotel, built in 1926, is still very much operational, and Yarragon Presbyterian Church, which dates back to 1917, is now home to All Things Bright and Beautiful gift store where you can buy high-quality craft and ornaments, novelty socks and puzzles to keep you entertained on the road.

“Yarragon is a town that exists on its tourism trade, and by visiting Yarragon you are supporting our local communities and families,” she tells The Wanderer.

“The community is engaging and friendly, and is known for its ability to work together. The strong connection between arts, shopping and great food is created by the people who call it home. There are so many interesting and wonderful people to meet – and Yarragon loves visitors!” 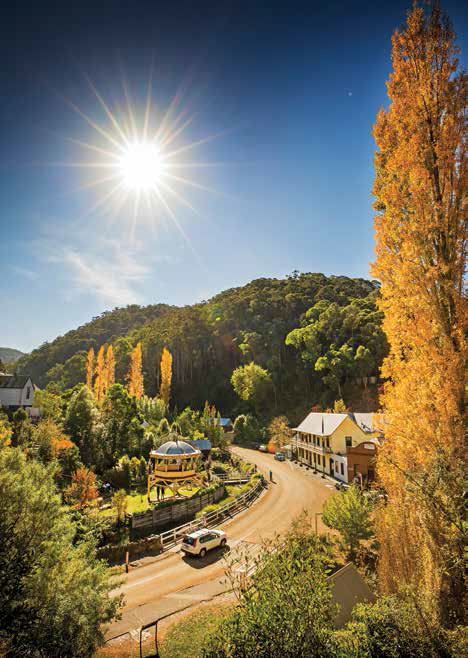 Entering the picturesque and historic township of Walhalla

For an art experience of a different variety, she recommends taking a peek at Town and Country Gallery as well as artwork and crafts on display at the Station Gallery Yarragon. The gallery is run by the Baw Baw Arts Alliance and is literally housed within the town’s historic railway station, constructed during the area’s timber boom but which fell into disrepair and has since been restored.

Foodies will not be disappointed here, either. Yarragon is the central point for exploring the incredible food and wine on offer in the region  thanks to its location of the soil-rich wine country and surrounding dairy farms. With the Strzelecki Ranges in the background, it’s pretty easy on the eye as well.

There is a variety of local vineyards, farms and food outlets throughout Yarragon, Drouin and Warragul. If you’re pressed for time, you can get a very clear snapshot of the tastes of the region at the cafes in town.

Gippsland Food & Wine, a store in the village that is also a CMCA RV Friendly destination, offers hearty country breakfasts but is also the biggest deli in Gippsland and a magnet for lactose lovers, offering locally-made cheeses from Tarago and Berrys Creek among others. You might not be able to resist its range  of Gippsland gourmet jams, sauces, honey, mustards, chutneys, biscuits and confectionery.

Moseley says there are wonderful community events all year round to enjoy, including local markets, book fairs and art classes, and there is also a great deal to do in surrounding towns. Warragul offers a rich arts culture, while Trafalgar is home to the Trafalgar Holden Museum. The picturesque township of Willow Grove is close to Blue Rock Lake which is well known for its plentiful bass fishing, while the bakery at Thorpdale is the first  stop en route to a picnic at nearby Narracan Falls.

Mount Worth State Park, which protects a remnant of the mountain ash, grey gum and blackwood forests that once covered the western Strzelecki Ranges, is also highly recommended.

“It is a stunning, peaceful location and one of Baw Baw’s greatest hidden gems,” Moseley says.

There is an abundance of delightful shops and eateries in Yarragon

Heading north-east from Yarragon along the Princes Highway until Moe and then up along the Moe- Walhalla Rd, the roads become quieter and travellers slip through wooded forests and rolling green hills toward what’s known as the Mountain Rivers region.

The area is rich with 19th Century goldrush and timber industry heritage, although these days its tiny towns of Erica, Rawson and Walhalla and their equally small populations offer a far more relaxed vibe. Erica and Rawson are at the foothills of the Baw Baw National Park and serve as a convenient base for all types of nature activities.

Bec and Trev Closter, who own the Erica Caravan Park (also a CMCA Dollar Wise Park), say the area is attractive to visitors all year round.

“We originally looked at buying something near the beach but if you are in a beachy area you are always relying on a fantastic summer,” says Trev. “Up here we have realised that over winter we have the ski season at Mt Baw Baw and Mt St Gwinear and through spring, summer and autumn you have bushwalkers, mountain bikers, 4WDers and motorbike riders.

“The tracks around here are some of the best in Victoria, and we are at the start of all those. You can also go fishing and kayaking at Thomson River and Thomson Dam.”

Bec says a lot of people who stay at the park use it as a base to explore the area. She says many people book in for two nights and end up staying for five or six.

“There is so much to do, it is not a one-night stop,” she says. “They will do a day trip to the historic town of Walhalla, they might do a trip to Mt Baw Baw, then a day to Thomson Dam and they might take a walk up to Mushroom Rocks and up through Tyers Lookout.”

She says winter is a great time to see snow at an affordable cost, particularly  at nearby Mount St Gwinear within Baw Baw National Park.

“It is amazing,” she says. “It is cross country skiing and toboggans only. It is very appealing to families with kids or people who are watching what they are spending because there is no charge to enter – it is all free.”

In winter, cars and motorhomes must wear snow chains if travelling past Erica, but if driving further east to visit Thomson River or Walhalla, you only need have them on board.

The heritage township of Walhalla is a picturesque drive from Erica and Rawson and offers its 120,000 annual visitors the chance to step back in time to see what life would have been like in a 19th Century gold mining town. Its a pretty-as-apicture location in a wooded, steep valley and an ideal day trip where you can pan for gold at Stringers Creek, meander through town to see the historic church, the central bandstand, school and shops, climb aboard the Walhalla Goldfields Railway and take a tour of the Long Tunnel Extended Gold Mine. 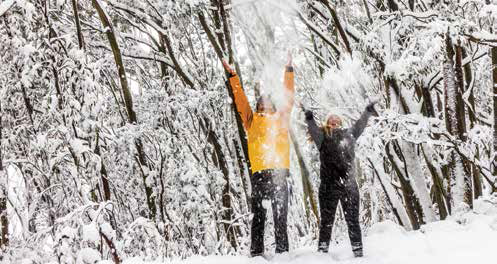 Bec and Trev have had several caravans and have done a lot of travelling around Australia. They moved to Erica from St Andrews on the Mornington Peninsula in 2018 after deciding they needed a different lifestyle. Bec had visited Walhalla a few times and loved it, and the pair spent their 10th wedding anniversary exploring the area. They had planned to buy something near the beach, but when this opportunity came up they took a chance on a tree change instead.

The caravan park needed some love and attention, and the pair have tidied up the grounds, and built a new BBQ area as well as a ‘Campers Bar’ for BYO drinks and happy hour with communal fire pits. But they say their park is far from a ‘resort-style’ affair.

“We explain ourselves to people as a bit old school,” Bec says. “It’s about switching off and having time with your family or your partner or friends. There is no Wi-Fi – it’s not about kids being on screens, it’s about fresh air and running around.”

The park has 20 powered sites and 25 non-powered. The latter have been widened by the couple to accommodate larger motorhomes and caravans. Bec and Trev say  they are welcoming plenty of grey nomads and CMCA members to their tiny town, which has a post office, a general store and a pub Bec says is only 96 steps from the park.

“We have a lot of the grey nomads and they are the ones that get us through each week, she says. “They are the ones who pull in on Tuesday or Wednesday night because they want to be somewhere quiet; they don’t want to be in a busy caravan park.”

The other attraction is the couple’s dog, Scooby Doo (who looks remarkably similar to his cartoon namesake) and a travelling family of koalas who visit the park every summer.