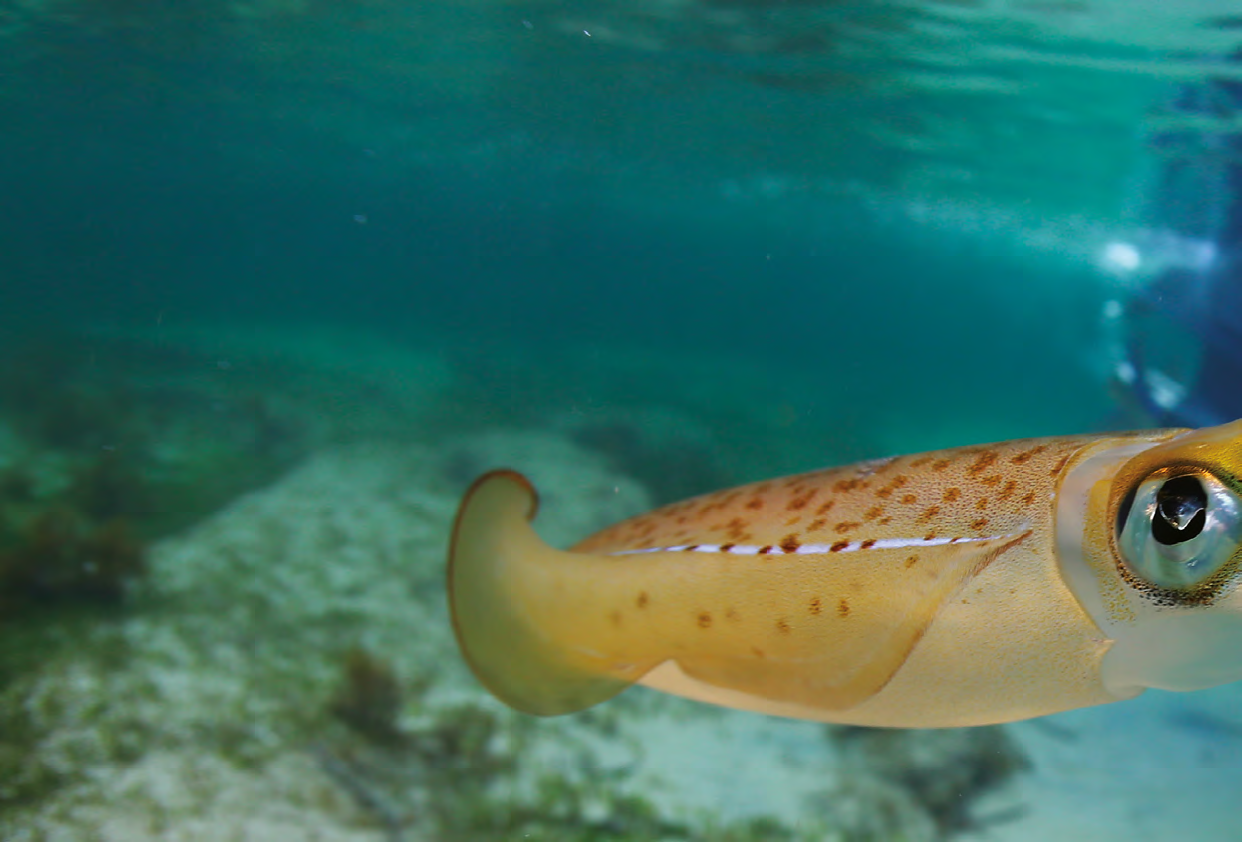 If there is one ocean dweller that has grown from relative obscurity to fishing fame (if not fortune) it is the squid. It really is amazing how popular squid fishing has become. What made squidding so popular was the introduction of the prawn jig. In the past we used to use those ugly white jigs or squid spikes but now it’s all about fancy prawn-style jigs.

In places like Sydney Harbour where smaller squid are prevalent the smaller 1.5- to 2.5-sized jigs work best while in coastal waters the jigs 3.5 and larger will produce bigger fi sh. Down in Victoria and South Australia squidding has really taken off, mind you, they do have the biggest calamari in the country.

The great thing about squid is that they are fast growing which makes them a great option in terms of sustainable fishing. Most squid species live for just 18 months so they are ferocious feeders eating anything and everything they can. As a result, catching a feed recreationally is low impact on the fishery.

When it comes to fishing for squid there are a surprising number of techniques being employed as anglers become more and more target specific in their approach to these cephalopods. First and foremost you cannot skimp on cheap jigs. It may sound like a sales pitch but this is one case where spending the dollars definitely pays dividends – you will catch more with expensive jigs. Better quality jigs are balanced so they sit perfectly in the water and most importantly they do it very slowly. Cheap jigs are often balanced poorly  and roll over when they sink, which deters the squid.

Tackle, too, has changed as influences from Japan filter through to Australia. A good squid rod needs to have a very soft tip section, which helps to absorb the squid’s actions as it tries to pull back and rid itself of the hooks. Secondly, the rod is still light and crisp enough to cast light jigs a good distance out. The good news is cheap rods often hold these characteristics making squidding inexpensive.

Drifting over weed beds casting jigs downwind is the most common technique. If you have a couple of anglers in a group always make sure you are running different sizes and colours in your offerings to cover all bases. For some reason squid will often be very selective when it comes to jigs and only eat one size of colour. The trick is working out which one it is. However, the real skill is in the retrieve.

The second technique is simply a more radical approach of the first one and is a favourite with squid specialists. After letting the jig sink a bit the slack is wound up and the rod ripped forward in an aggressive jerking action a couple of times before letting it sink again. The jig is left to sink for considerable time before the action is repeated. This retrieve means the jig zips forward at the same level in the water column as opposed to the traditional approach, which is more up and down.

The third technique is the easiest to master. Cast the jig out let it sink and then wind it very slowly back. That’s it; no additional action, and it works a treat at times when the others are producing zeros. The one thing that is essential are the better quality jigs, not because they have a better colour pattern but instead because they sink horizontally with the jig sitting perfectly natural in the water. Irrespective of which technique is used the bite nearly always comes when the jig is sinking so it is imperative that it looks natural at this point; anything out of the norm and the squid may shy off. Also, if you ever snag on any weed, pull the jig straight in and clean it. I am not sure why but squid are very particular and I have never heard of  anyone hooking up when their jig is fouled with weed.

Casting is designed for shallower water, especially over seagrass and kelp beds. In deeper water, where it  takes too long to get the jigs down, the trick is to fish them on a paternoster rig, exactly as you would when bottom fishing. The only difference is that there are no hooks. You are not  restricted to one either and can fish two jigs of varying sizes at once to double your odds. A double header of squid is a lot of fun.

The best part is you don’t need a boat to catch squid – casting off the rocks will produce a feed in bays and estuaries as well as along headlands. Basically anywhere you find weed beds – especially seagrass and kelp beds – there will be squid. 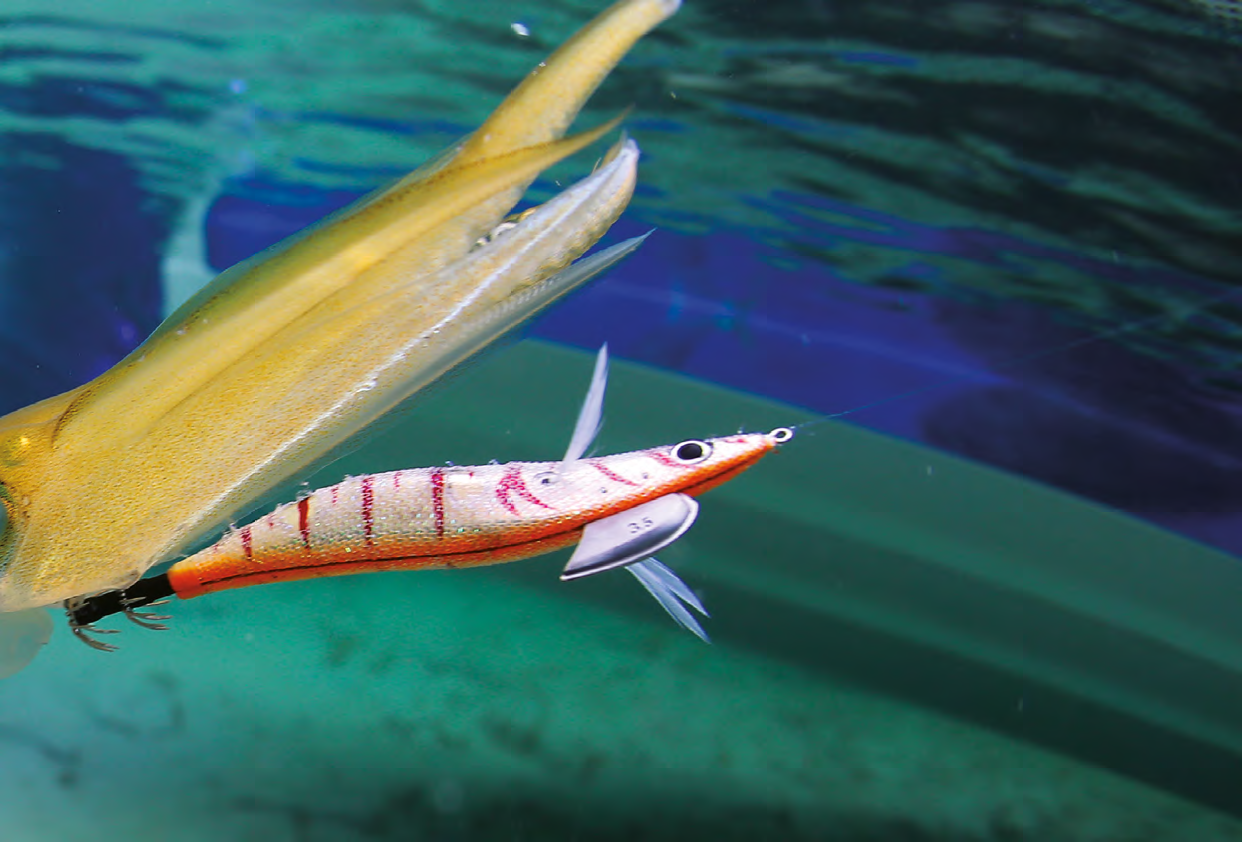 Another option is to fish at night from wharves with lights. Being nocturnal, squid will congregate around the illuminated water to feed on baitfish attracted by the light. Flicking a jig around the perimeter of the light and letting it drift can be deadly at times.

When you do hook up always get another jig straight behind the hooked one. The amount of times you can turn a single hook up into a double or even a triple is amazing. The biggest dilemma for squidding is whether to eat them or use them for bait.

I love turning them into a big king or jewfish but it can be difficult to justify that to the family.