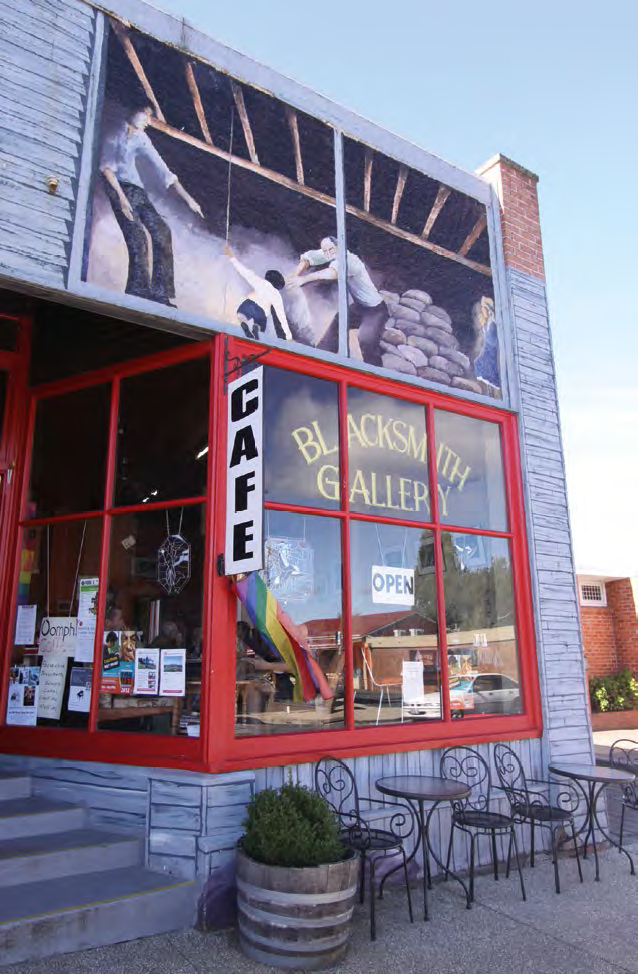 The picturesque sight of Mt Roland dominates the landscape in this scenic region of Tasmania. However, the small town of Sheffield has, in recent years, come out from the shadows to show that it too can draw tourists by the thousands.

Back in the 1980s and ‘90s when the rural recession was hitting hard everywhere, this small township, like many others, was going backwards. People were leaving, businesses were closing, shops were empty, unemployment was sky-high, and the outlook for the future was not much better. In those days tourism was slowly being recognised as a way to reignite a dying town, but how do you attract tourist dollars to a small, struggling community?

Already surrounded by other appealing and imaginatively named towns and communities such as Paradise, Promised Land, Garden of Eden and No Where Else, the Sheffield locals had to come up with something really different. Around this part of northern Tasmania it is well known that the region owes its beginnings to the fighting, hardworking spirit of the mostly Scottish settlers who, with determination and endeavour, established the area as a prosperous rural community.

As it happened, a local resident, Beth Pagel, had recently seen a documentary about Chemainus, a small sawmilling town in Canada that had saved itself from a similar fate by starting a mural project. A crisis meeting in the town was called and the locals agreed to support a radical new plan to turn Sheffield into a giant outdoor art gallery and hopefully, bring tourists and their spending dollars back into the town. During the process, Beth Pagel wrote to the organisers in Chemainus and obtained a few valuable ideas from them, and the rest, as they say, is history.

In the beginning, farmers and struggling local businesses found it difficult to believe that such a scheme could be the answer to their prayers. One colourful old timer is reported to have said at the time, “you lot are trying to turn this bloody frog into Prince Charming.” It was hard for some to believe that a creative artled tourist recovery could really work.

Local artists were persuaded to donate their talents, sponsors were secured to cover the paint and other costs, and the project was underway – all with the underlying theme of depicting the history and culture of the region and its people, as well as the local scenic beauty of nearby Mount Roland and the picturesque Cradle Mountain region.

The first mural to be completed was by artist John Lendis, depicting  Austrian immigrant Gustav Weindorfer, a passionate mountaineer, naturalist and conservationist who came to the area in 1906. After his young wife died, he retreated to a hut he built on the slopes of nearby Cradle Mountain where he lived in peace with his closest friends, the wildlife. He spent his life campaigning to have Cradle Mountain declared a National Park, which eventually came about. 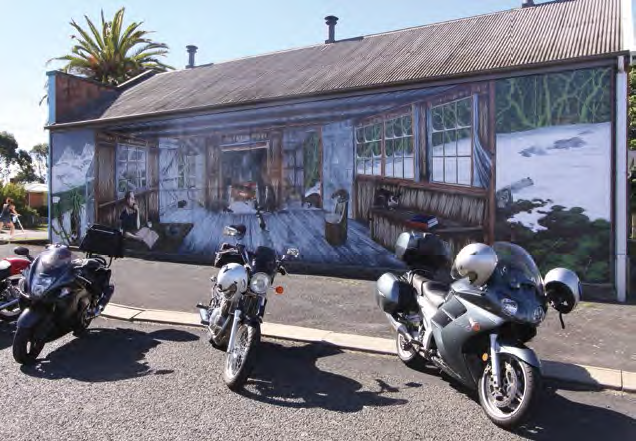 The mural, it seems, set the trend for others to follow, drawing out the rich history of the area and its people.

Other local legends and events depicted in the murals included the storms that had claimed lives in the mountains, and local heroes, like the local Police Senior Constable Harry Clark, who battled a blizzard to save many others. There’s also recognition for the town’s founders -  devout members of the Brethren Church who, although dressed in black, were apparently very happy and thought they had really arrived in the Promised Land.

The walls also included the stories of local businesses, historic events, the mail coach that operated here until 1920, the natural beauty of the nearby mountains and rural landscape, and even a depiction of the old post office tree has been included. The tree was once used as an official mail box earlier this century and was also a place for lonely miners and cattlemen to stop, swap stories and pick up the latest news. True to form, this sculpted fibreglass replica of the tree, somewhat resembling Ned Kelly’s iron mask, is today used as a real post box with mail posted in it specially stamped to show it was posted at Sheffield’s Post Office Tree.

As you stroll around the town you have to keep looking backwards, sideways, as well as straight ahead as the murals seem to appear in the most unexpected places around every corner and down every alley. Even the public toilet block hasn’t missed the painter’s brush and if your need isn’t urgent, it’s worth pausing to have a look outside, before a visit inside. 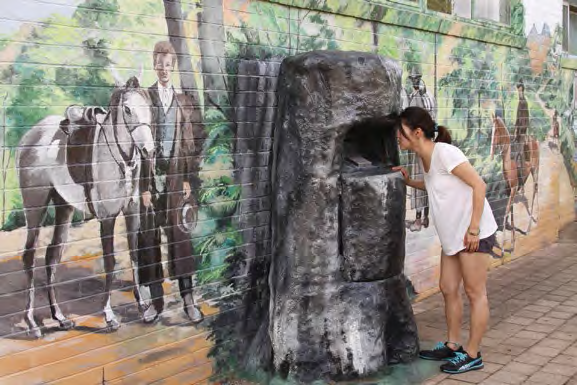 In recent years a specially built Mural Park (adjacent to the Visitor Information Centre) has been imaginatively constructed, with lovely surrounding gardens, to house a series of murals painted especially for Sheffield’s Annual Mural Competition on specially erected panels. Each year at the end of this increasingly popular event, most of the murals are available for sale and the park is then progressively set up for the next year’s event. Yes, the concept of ‘revolving  murals’ here in Sheffield has added yet another colourful dimension to the town’s already wonderful display. 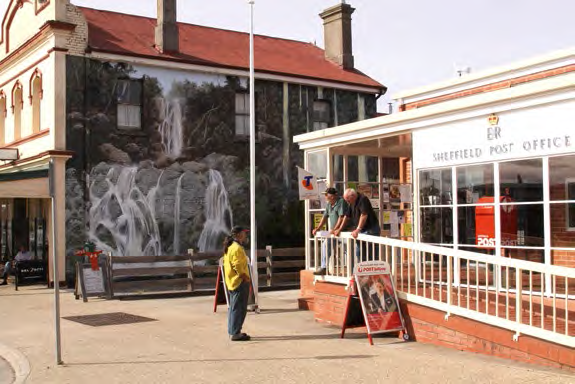 With on-going plans to develop even more murals around town, there is a regular joke with locals - if you stop here long enough, it’s likely a mural will appear on your back! Today, with a total of 50 murals, Sheffield and a few neighbouring hamlets have clearly painted themselves back onto the tourist maps.

It is already estimated that several hundred local jobs have been created by  the project and Sheffield is truly booming with scores of visitors and hundreds of tourists seen in the small town every day of the year. With an annual tourist influx into Sheffield of around 150,000, spending money in local businesses from ice creams through to overnight accommodation whilst they are there, the town is now actually growing with quite a few new homes to be seen and businesses are once again taking on staff. Yes, Sheffield is once again alive and well, having painted itself back to prosperity. 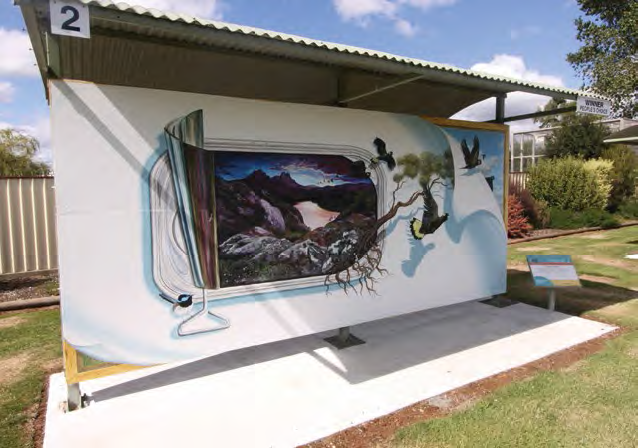 ‘The World Open’ - on display in Mural Park

• Sheffield is 32 kilometres south of Devonport on Tasmania’s north coast.

• Sheffield has a current population of approximately 1,500 residents.

• Sheffield not only attracts thousands of tourists, but it is also becoming home to numerous writers, artists, musicians, sculptors and others wanting a change from their busy city life.

• An audio tour option is proving extremely popular in town, enabling visitors to stop at each location and listen to stories from local characters and witness the colourful history of Sheffield depicted on each of the murals.