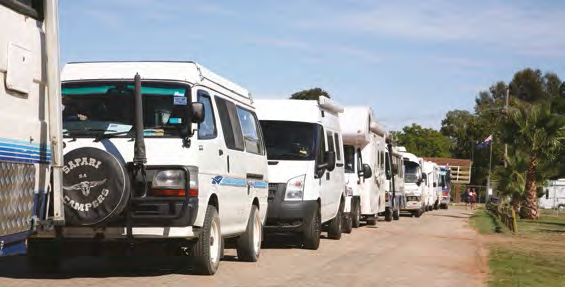 KEA Tracks recently spent a few days at the Robinvale Rally. We took the opportunity to wander around and catch up with a number of acquaintances while we were there. One of the things that greatly intrigues us is the considerable logistics of a rally. If you have never been to an event like this, then it’s effectively like setting up a small and temporary town, with just about all the comforts we have all come to expect. Mains power, running water, toilets, showers, dump points, seminars of all sorts, entertainment and buildings/marquees to hold everyone and everything. It’s all quite amazing when you think about it.

This time, in our case, our rally experience included a site with green grass underfoot. Something not to be sneezed at we have to say and we certainly did not miss the dust and wind, which caused plenty of sneezing, which was so prevalent at Narrabri. Also providing an excellent backdrop was the Murray River, which not only delivered a water-cooled breeze or two but also gave some spectacular sunrise and sunset reflections.

There’s no doubt from our observations that the volunteers as usual did a sterling job in setting up and running the event. We reckon those willing people who do everything from meet and greet to cleaning the toilets are unsung heroes, especially in the latter category. Getting dragged away from happy hour to fix a broken water pipe is not the most appealing task but the maintenance team was always ready to leap to its collective feet and do whatever is required.

We noted the same willingness among the CMCA staff on-site. In some cases they worked long hours, always trying to help club members with any problem. We did envy their being in an air-conditioned building on the hot days – we also noted that the trade area in that same building was very popular on those same warm days.

While at the rally, we had some time out with Masterchef Mark and Louise Holland. Mark, of course, impresses everyone with not only his cooking demonstrations but also that the fine fare can be enjoyed afterwards. The satisfied look on the faces of many an attendee told its own story.

KEA was only too happy to lend Mark and Louise a motorhome for the duration of the rally and it was a pleasure that it was used for such a tasteful purpose. We’ll declare a vested interest here. Sitting back in our camp chair, we enjoyed a late night supper and a wine or three courtesy of Mark.

The photographic competition was another item that we paid careful attention to. After the last rally, you might recall that we offered a few tips on taking photographs and it was clear this year that attention was paid to those. Well, we’d like to think so anyway. All who entered the competition should be encouraged by their efforts; there were certainly some great entries.

Ray Jones and his team are also to be congratulated for their fine work in not only providing the superb setting of the rally site along the Murray River but also ensuring that everything ran as smoothly as possible.

We are aware that there are many CMCA associate members who do not  own a motorhome. We know this looks like a free plug, but if you’d like to attend a rally, even for a few days, then hiring one of our motorhomes and attending a rally is easy. The forthcoming rally at Port Stephens/Nelson Bay is less than three hours’ drive north of Sydney, so it’s not even a long drive for those in the NSW metropolis.

On the subject of long drives, one of our colleagues who travelled a long way to the Robinvale Rally received a very sad but timely reminder about taking plenty of rest breaks. He witnessed a B Double sprawled across both lanes of the Sturt Highway. It turned out that a driver towing a caravan had fallen asleep on a long and boring stretch of road and drifted across into the path of the B Double. It wasn’t a pretty sight and the emergency services had their hands full. To paraphrase the club motto, Laugh More, Live Longer, Rest More, Live Longer might be appropriate here.