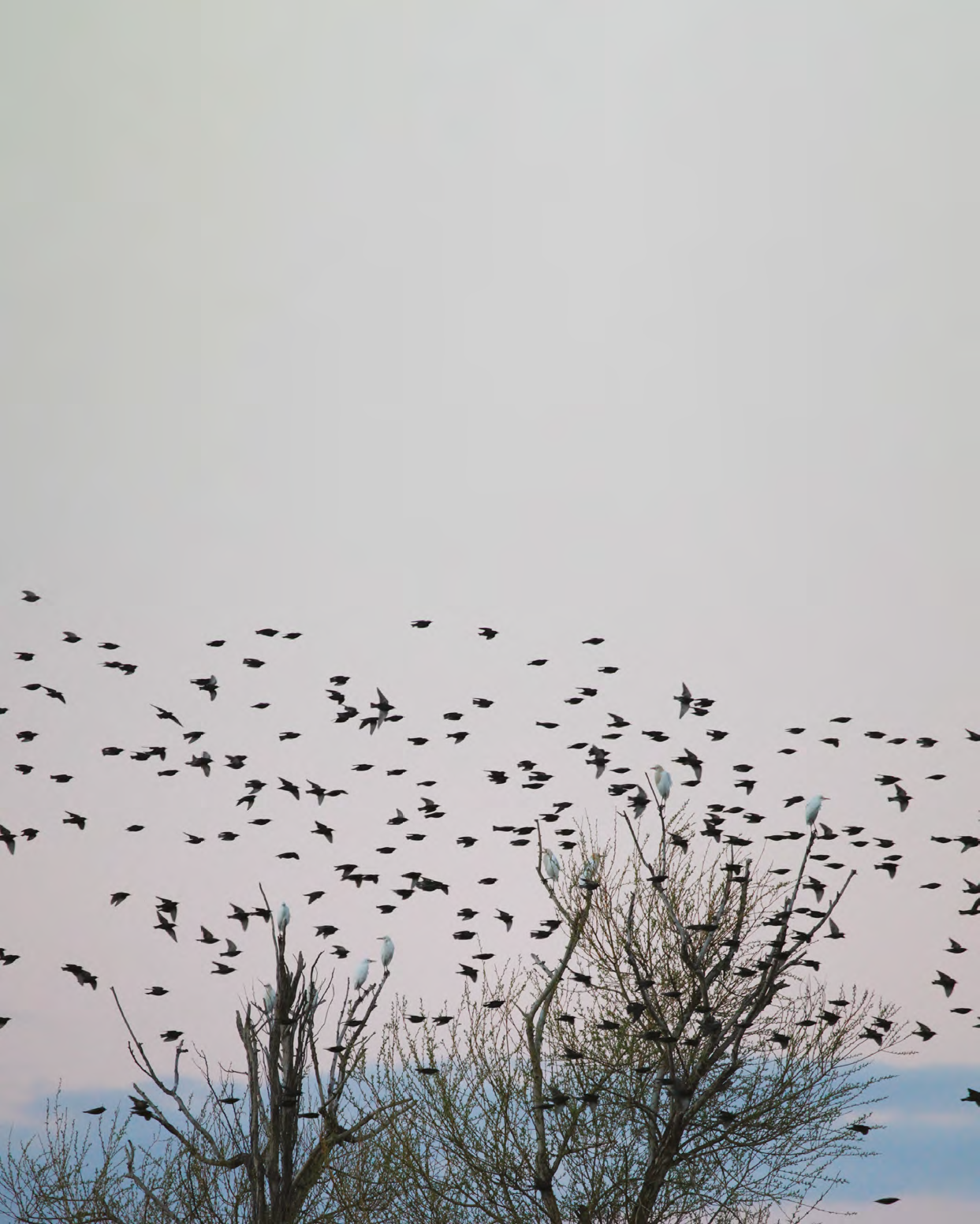 If you were born and bred in Melbourne, Sydney, Adelaide or Hobart starlings and sparrows are part of the furniture. To you no Australian urban or city landscape is complete without pockets of sparrows pecking over discarded food scraps or the dark visage of starlings crowding out the tops of powerlines.

But if you’re from Perth or Darwin these are alien scenes. You probably didn’t see your first starling or sparrow until your first trip interstate, or even overseas, or maybe you’ve just read about them in books. That’s because, so far, these two cities have managed to keep both bird species at bay.

For a number of years there’s been a point on the road from Adelaide to Perth, just before the Western Australian border, where the official domain of the European starling comes to an end. Controlled shooting is used to keep these ‘rats of the sky’ out of Australia’s largest state, but populations have been recorded in five separate areas in the Southwest Australia Eco region, a 493,000 square kilometre global biodiversity hotspot home to the highest concentration of rare and endangered species in Australia.

The sparrow’s reign over eastern Australia finishes at a similar point on the road from Adelaide to Perth. If caught crossing into Western Australia they run the risk of being shot, trapped or poisoned.

Why all the fuss? Sure, compared to Australia’s colourful parrots and larrikin cockatoos starlings, for example, are pretty drab examples from the bird kingdom, and their tendency to hang out together in large numbers has the feel of a gang of bullies, but aren’t these just human emotions we’re dumping on them?

Well, no, like all pest animals starlings pose serious threats to the Australian farmer and our native plants and animals. They have been labelled one of the world’s 100 most invasive species, and cop a bad name in eastern Australia for the aggressive way in which they take over and defend tree hollows suitable for nesting. A NSW study has shown starlings occupying a third of available nesting hollows, pushing out native parrot species.

If they make it past the WA border and manage to become established they could put at risk about 30 native hollow-nesting  bird species in the Southwest Australian Eco region including Carnaby’s cockatoo, the elegant parrot, red-capped parrot and the blue bonnet. 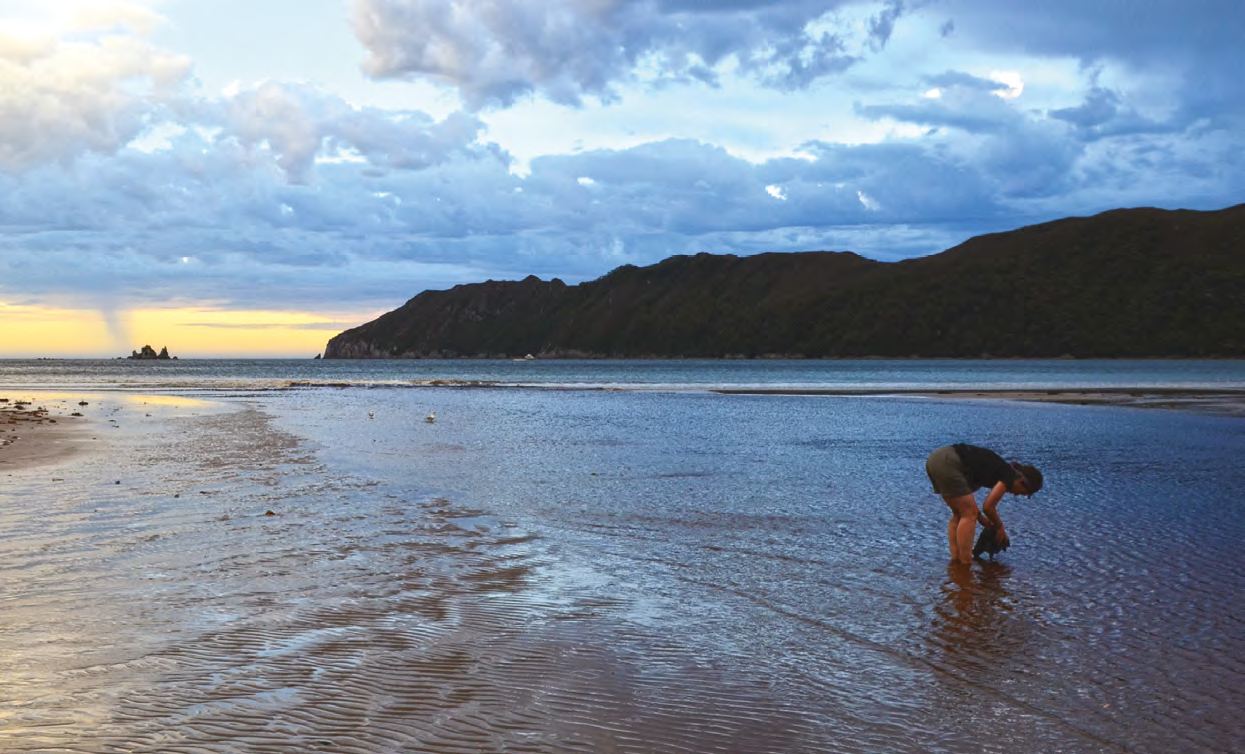 And while the sparrow isn’t in the same ball game as the European starling it too carries risks. Moving in flocks they are experts at driving away small native birds, damaging fruit, vegetable and grain crops, and are susceptible to a range of diseases, including salmonellosis and tuberculosis.

These are just two examples of invasive pest animals you are likely to come across while travelling around Australia, there are many, many more. Some, like the cane toad, will repulse you, but most often you won’t even know they are there, like the feral cats and foxes that roam our wild landscapes at night, killing native mammals and slowly but surely changing forever the ecology of Australia.

Then of course there are our invasive weeds. If travelling through rural Australia you might catch your breath the first time you see a field covered in purple flowerheads. Known to some as Salvation Jane, others as Paterson’s Curse, you’d be looking at a weed that though beautiful to the human eye is estimated to cost our  sheep and cattle producers $250 million through lost productivity, control costs and wool contamination every year.

Patto’s Curse also has its environmental costs, and can rapidly take over bushland areas where it dominates and suppresses native plants. It can produce prolific amounts of seed – more than 5000 seeds for each individual plant.

Like many of the serious weeds that have spread across Australia Paterson’s Curse is considered a beautiful wildflower in its homeland, but here it is a dangerous environmental threat. And like many of our serious weeds once your eyes have  been opened to their presence you start seeing them everywhere.

Lantana, another weed with a beautiful flower, is a scourge across more than four million hectares of eastern Australia, and a threat to over 1000 native plant species. 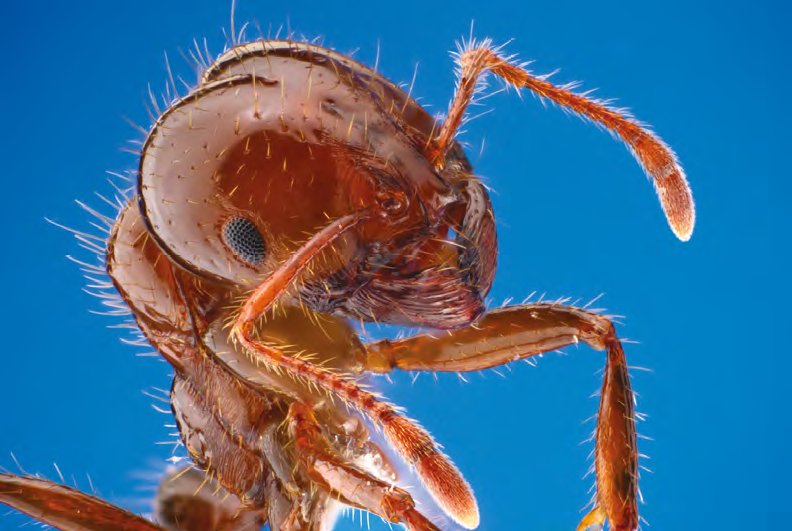 Blackberries, feared for the fortress of hardy thorns they put up to defend and expand their territory, but loved for their brilliant juicy berries, are such a significant environmental threat that they have been listed as a Weed of National Significance. Next time you come across a thicket offering up their berries keep in mind that it is regarded as one of the  worst weeds in Australia because of its invasiveness and potential to spread throughout the landscape.

In NSW, at least 1650 exotic plant species have become established in the wild. About a fifth have been recognised as having serious impacts on the environment. We could go on.

And as if this wasn’t enough there is also a host of environmental diseases that pose just as serious a threat to our native plants and wildlife, often aided and abetted by blissfully unaware travellers exploring our wild places by foot, 4WD or even just car camping. 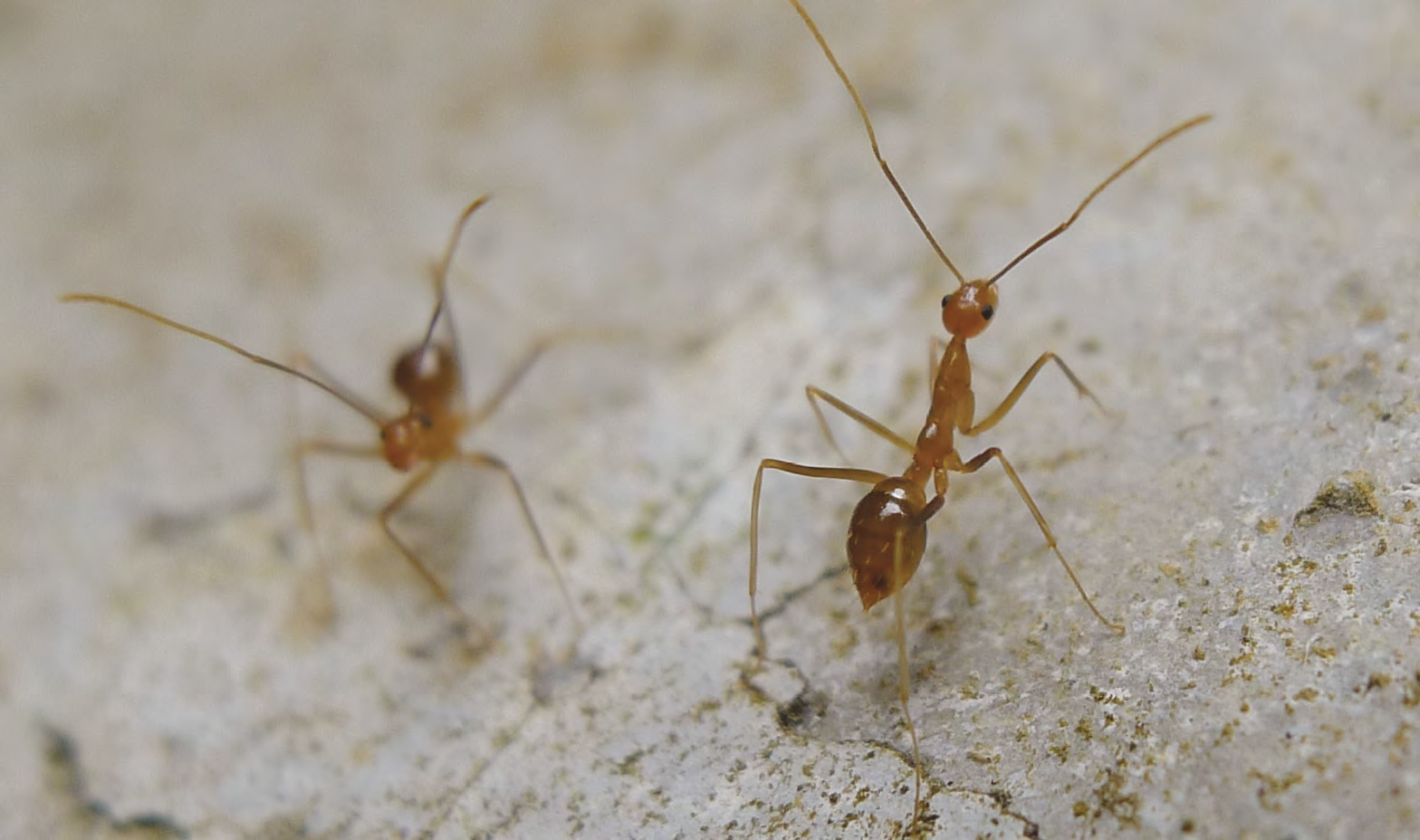 These invisible hitch-hikers are spread on muddy boots, in wet fishing gear or even hidden in the dirty wheel rims of your car. Invisible to the naked eye they are one of the most insidious threats to our wild places.

Among their legion is Chytrid, a fungal disease blamed for frog extinctions both here and overseas. Phytophthora, a root rot known as the bulldozer of the bush, destroys native plants and is spread in mud and soil on boots, bikes and vehicles.

The threats posed by weeds, feral animals and invasive diseases in Australia is frightening, and just as much a risk  to our wild, beautiful places and unique native animals as habitat loss and climate change, and yet for many Australians they continue to fly under the radar.

Invasive species now account for two-thirds of all listed threats to our native plants and animals, and there is a host of other dangerous species continually breaching our international borders. 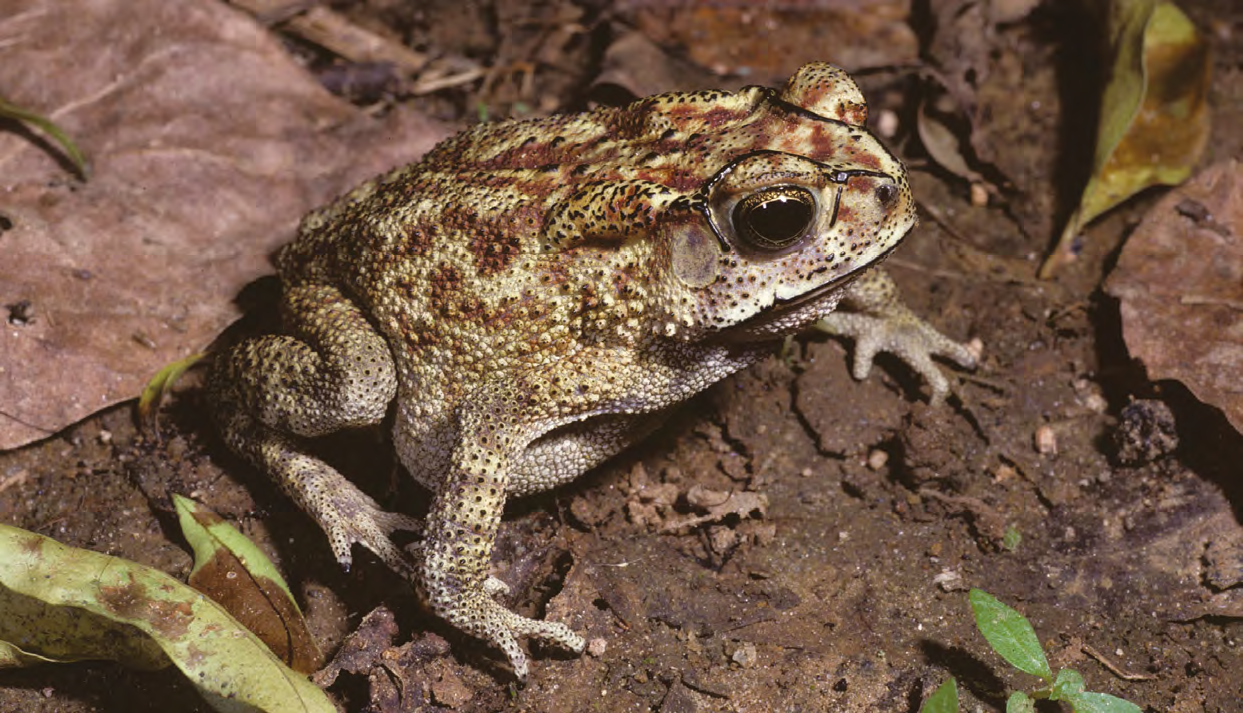 In June last year a toad looking suspiciously like a cane toad turned up in a backyard just 15 kilometres north west of Melbourne airport. The owner quickly alerted authorities, worried their home had just become ground zero for a Victorian invasion of the deadly pest, only to find out that what they had discovered is potentially far worse. Sitting in their dog’s water bowl was an Asian black-spined toad, a species with all the insidious characteristics of its better known cousin the cane toad, but which has never before been found in Australia outside of a major port.

Just like the cane toad, the Asian black-spined toad has poison glands, eats a broad diet and is a prolific breeder – females can produce 40,000 eggs at a time. If it ever became established in Australia it would compete with native frogs, poison its predators and carry the potential to spread new parasites and diseases.

In November this year a colony of red imported fire ants was discovered in Port Botany, Sydney. If they spread and are not eradicated, life in Sydney and other large parts of Australia will be irrevocably changed. 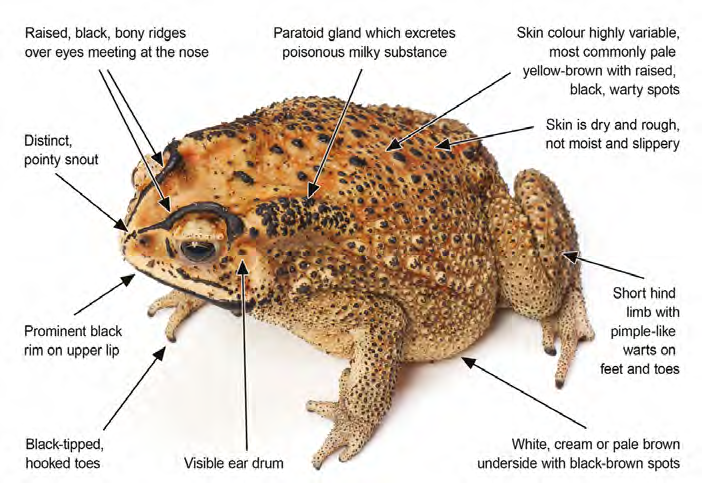 When a red imported fire ants mound is disturbed, thousands of ants swarm to the surface and repeatedly sting the intruder. This makes infested parks and gardens uninhabitable. In the US, 30 to 60 percent of people in infested areas are stung each year. The stings are painful and the alkaloid venom causes pustules and, in some people, allergic reactions. More than 80 people in the US have died of anaphylactic shock. Some elderly people in nursing homes have died after mass stings.

Imagine ground-nesting birds and lizards and other wildlife being stung to death by thousands of tiny ants. That’s the reality we face if this new invader ever establishes itself in Australia.

There comes a time when talking about weeds, environmental diseases and feral animals that the facts and figures becoming overwhelming, and it’s tempting to switch off, to ignore the issues, to pretend they don’t exist or that we can’t see them.

But the cost of inaction is too great, and the reality is every year hundreds of thousands of Australians are doing their bit to turn the tide on invasive species. They come in many forms and include armies of volunteers spending weekends keeping weeds out of their local bushland reserve, ‘citizen scientists’ who give up their time to help with scientific programs aimed at understanding the movements and populations of feral animals such as cats and rabbits, or simple planting  projects that are putting native trees and shrubs back into the landscape, making it harder for weedy species to move in and take over.

Even as a traveller there are ways you can help in the fight against invasive species. Just being aware of the damage they do is a start, but you can also get involved in weeding events around the country, the Conservation Volunteers website always has plenty of events listed.

You can also use a number of simple techniques to keep your gear clean when exploring Australia’s national parks and other wild places. These simple tips will help you keep them free of deadly pests and diseases:

The Invasive Species Council campaigns to protect Australia’s native plants and animals from the growing threats of weeds, feral animals and diseases.

With your help we can educate more Australians about these dangers and protect the wild places we all love.