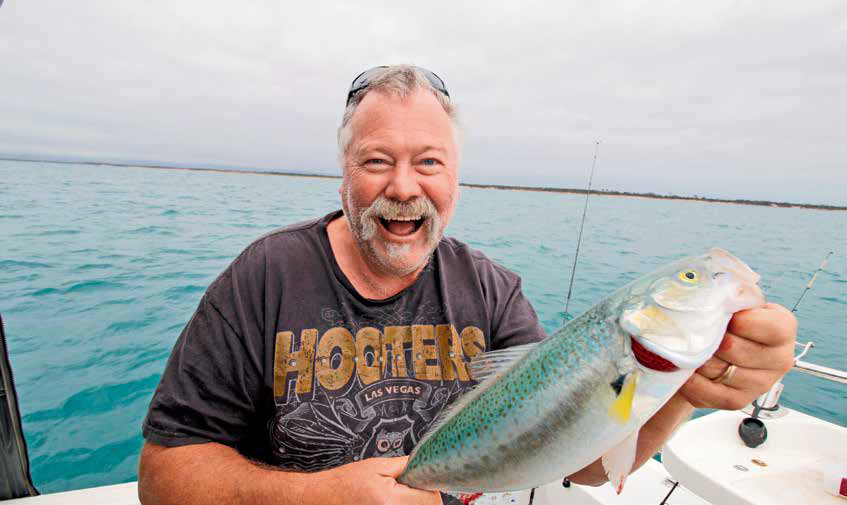 Australian salmon will bite on a range of lures – skirts, hard bodies, slices, jigs... just about anything!

Australian salmon are the epitome of the tough Aussie battler. Once hooked, their fighting skills are paramount, battling for their salvation with bold courage and sheer muscle. They know every trick in the book to evade capture, from long blinding sprints and shivering headshakes, to surface leaps with their gills flared and tails dancing.

Aussie salmon do themselves proud with their speed, resolve and tenacity, and thankfully they are a common species available from a wide variety of environments. This makes them a terrific target for summer holiday fun.

There are actually two different biological species, the western (Arripis truttaceus) and eastern (Arripis trutta) Australian salmon, yet they all have the same outward appearance and tenacity. They are available across much of Australia’s coastline, from southern Queensland right around the bottom of the country and up as far as Kalbarri on the west coast.

Both the eastern and western species lay their larvae and eggs in spawning areas in the northern regions of their realms, to be mixed and dispersed southwards in the prevailing currents – the Leewin  Current to the west and the East Australian Current to the east.

Their range and coastal habits make them an ideal target for fishos, from novice to expert, and often a welcome by-catch when fishing for other species. They will also take a great range of baits and lures and can be found on most surf beaches, river mouths and coastal estuaries, further increasing their appeal.

There are probably millions of kids who have cut their angling teeth with an Aussie salmon, and the performance they put on the line leaves a lasting memory, hooking the novice fisho for life.

Salmon are also a schooling fish, so it’s uncommon to catch just one. However, their feeding patterns can be turned on and off almost instantly by tidal movements, sun rise and set, moon phases and other climatic variances.

WHERE TO FIND THEM

Summer holidays spent fishing for salmon off the beaches and piers makes a great family outing. The salmon will regularly hit the shoreline, feeding in the whitewater of a surf beach on the top end of a rising tide – this is when the waves dislodge all manner of goodies, like crabs, shrimp and worms, from their sandy hollows.

Even if the salmon aren’t feeding on the smaller sand dwellers themselves, they will be feeding on the smaller bait species that congregate to feed at the crashing water’s edge. Look for a gutter on a beach, particularly the deep part where the waves feed water and washed morsels back out to sea, or perhaps the washout around rocky structures, such as a bommie or headland.

However, don’t confine your fishing to the top of the tide, as little Aussie battlers can show up anytime, especially when they round up a bait ball close to the beach or rocks. Aussie salmon will often be found in the run out of nutrients at a river mouth on a dropping tide, or run up an estuary mouth with the first clean water of a flood tide. That’s a terrific time to be waiting with the kids on the river banks or jetty, throwing all manner of baits and lures to attract the veracious feeders.

If you have a boat and coastal access, it’s not unusual to find massive, crashing schools of salmon at any time of day, mostly identified from afar by flocks of terns and gulls diving to pick up the crumbs in an amazing aerial display. This can also happen in a river or estuary and it’s an enthralling sight.

Preparing to hunt salmon on the water

HOW TO CATCH THEM

The bulk of the salmon’s diet is made up of bait fish, so smallish, flashy lures are favoured. Yet, anything closely resembling their prey will do once the fish are in a feeding frenzy. Often it’s just a bubble trail that will attract the strike. One of my favoured lures is a McDonalds thickshake straw cut into thirds, with a section simply threaded on the line and tied off to strait 1-3/0 strait J-hook and trolled around the coastal fringe or a feeding school.

There’s a million flashy lures – wobblers, slices, lasers and more – that give you the weight to cast from the shoreline. Or if you want to get really technical, there’s poppers, divers and flick lures that can be deadly. The trick is to try to match the bait they are feeding on, but still have the weight to cast into the hot spot.

For bait presentations, the good old paternoster rig is as good as any, whether in the surf or estuaries, but it must be geared up to suit the conditions. You may need to upgrade to 20lb main line with heavier fluorocarbon traces in the surf, especially since you never know when the toothy tailor may arrive in the same waters. You may be lucky to find gummy shark,  flathead or mulloway as by-catch, but you also need some strength in the tackle to not only compete in the heavy surf, but to have a chance of success with drifting weed, rocks and even crabs that love to latch on to baits.

Ganged hooks with full pilchards can be deadly for the larger fish but, generally, cut pilchards and the hardy salted white and blue bait works very well. Salmon also love smelly soft baits like pipi and mussel, yet these generally work better in the easier estuary environments where you might find the smaller specimens, often called ‘bay trout’. It can be very difficult getting soft baits to survive the long cast and turmoil of the surf.

While the eating qualities of Aussie salmon aren’t terrific, I know plenty of people that love them. Be sure to cut their throats immediately, then dispatch and cool them quickly or the flesh will sour. I’ve seen all sorts of recipes that increase the eating qualities of whole or filleted salmon, including cooking with bananas, yoghurt and all sorts of concoctions. For me, they make a wonderful base for Thai patties, so each to their own.

Thankfully, Australian salmon can be found year-round, and also make a great target for winter fishing when many of our pelagic and reef species leave the coastal range. Yet, summer holidays can be most fruitful fishing for these wonderful little battlers on our beautiful coastline, beaches and estuaries. Our wonderful salmon really are the fish for all Aussies!