It must be daunting for the uninitiated to walk into a fishing tackle shop with little experience but a tonne of enthusiasm. Many travellers have only had a passing interest in fishing throughout their lives, often never having the time to devote to learning the trade. Many people of my age or more were raised on bait fishing. (I’ll tell you I’m only 42 but it’s really due to Peter Pan syndrome, where I start counting backwards at 50!) A nice piece of frozen squid, pilchard or prawn, or maybe a dug up a worm seemed to be the sum of it. For lures, we had Celtas, Wonder Wobblers and slices, and then came the wonderful Tassie Devils. Yet, today’s modern fisherman often travels with no bait at all, much to the pleasure of anyone who has ever contended with a smelly freezer or rancid clothes in the wash!

Here are a few new ideas from my friend Danny Kardos from Gone Fishin in Carrum Downs, VIC. Each is designed firstly to catch the fisherman, and secondly, when used in the right manner, to catch fish. They all deserve a place in the tackle box.

There is a huge array of soft plastics for every species, from mullet to marlin. They come in a never-ending variation of sizes, shapes and colours, mostly imitating natural bait, but sometimes in some weird and wonderful concoctions that actually excite fish.

Soft plastics have traditionally been used in conjunction with weighted jig heads to get the lure down deep in the water column, mostly with just enough lead to softly bounce the lure off the bottom. Yet, this just isn’t practical when fishing around trees, snags, and weed beds, where fish like to hang out. Hence, there is a whole new range of “weedless” soft plastic lures that are unweighted or slightly weighted. They hide the tip of the hook until swallowed or bitten by the fish. The hook tips penetrate only when the lure is crushed by the mouth of the fish, leaving little chance of hooking on branches, weed or other obstacles. These new presentations have plenty of application as surface lures targeting any number of species in difficult terrain. They virtually eliminate the old saying: “if you’re not getting snagged you’re not fishing close enough!”

Crabs are a major food source for a great many species. There is barely an estuary species that doesn’t have crabs or crustaceans as a major part of their diet, and they are consumed by many other fresh and saltwater species, too. In fact, gummy sharks, flathead, barramundi, mangrove jacks, estuary perch, bass, bream, snapper and other predator species love crabs, inspiring a new type of imitation bait. Gone Fishin’s Danny tells me, “they are just the most deadliest thing to catch bream I have ever seen. Anyone can use them and they’re really easy to cast,” he said, as I held up a near exact replica of our local spider crab, a favourite bait for bream.

There is a large range of sizes, colours and shapes to tempt almost any shell muncher. I’m going to give one a go on the bottom hook of a paternoster rig next time I’m surf fishing. The long hard cast and turmoil of the surf often strips your bait without you knowing, so having a lure plus a bait on a two hook rig increases your chances of success. I regularly use surf poppers for the job, but next time it’s an imitation crab. I’ll let you know how I go!

There’s an endless array of pushing, rattling, swimming, spinning or vibrating topwater swim baits to tempt any denizen of the deep. We’ve got bumblebee, moth, cicada, frog, fly, beetle and a huge variation of imitation insects and other creepy crawlies that flutter, buzz, and shake their way across the surface, to lure a broad range of estuary and freshwater targets.

We even have larger swimmers that are often used as teasers for marlin and other pelagic species. The various actions are quite amazing with wings that flutter, legs that swim, and a range of other actions that can only spell angling success.

Micro jigs are really designed for boat fishermen, and are the evolution of the older “bobbers” and shiny slices. Micro jigs were developed by the Japanese who intrigued us with these flashy weighted slugs with the hooks on the wrong end! We traditionally had shiny metal lures with treble hooks at the rear that are cast or trolled to attract some action. They work fine; however, we have discovered that many species often attack their prey from the head, not the tail and hence most micro jigs are rigged vice versa, with the hooks on the leading edge.

Micro jigs are particularly effective from a boat or kayak using your depth sounder to identify the fish and dropping the jig into their domain. They are then worked in a series of flurries, where they drop into the depths like a fluttering feather and then are wound up fast in the erratic action of a sick or wounded bait fish. They are particularly effective on coastal reefs but have applications all over the country on a great many species. What a way to target a school of redfin bunched up around a submerged tree! I’m feeling the need for more field testing right now! 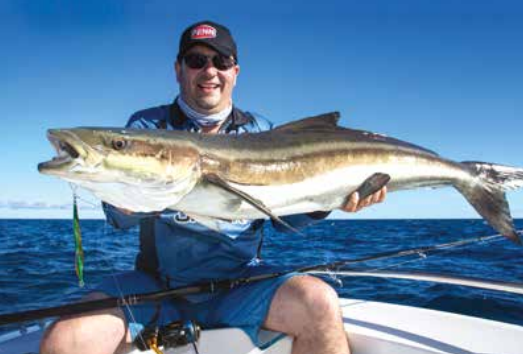 There is an amazing new fad emerging world wide with the development of swim baits. These whole fish imitations generally have one or more joints and are shaped to literally swim like a bait fish. They can be made out of a variety of materials both with soft or hard bodies, and often a combination of both.

These amazing pieces of lure craftsmanship are really taking off with those targeting the larger species such as barramundi, Murray cod and a host of offshore toothy critters. The sizes and colour schemes often directly imitate natural fish, remembering that a great many species are actually cannibalistic and eat their own young.

The beauty of all this is that you don’t need a complete quiver of rods and reels to tackle the range of “new age” methods described above. Perhaps a light spin rod for 2-6kg line, a medium weight for 6-10kg, and a two-piece surf rod will get you through in most environments around the country. But then there’s the lures...