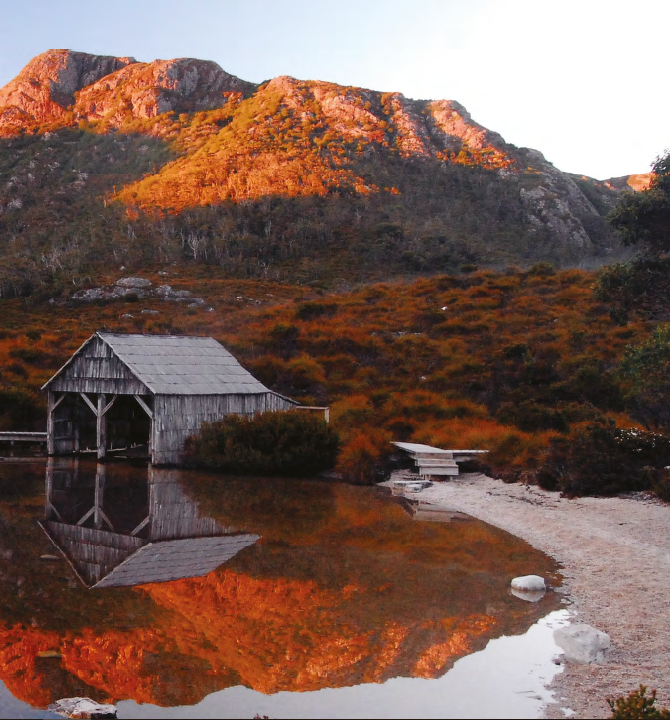 The ever popular Dove Lake

It was a day of no others, no others at least save those on the two-masted brigantine that gently rose and fell some kilometres out in the Tasman. In this place of profound awe-inspiring vistas I chilled out, removed my lunch from my backpack and pondered the magnificence of the place.

The crashing of the sea far down where water meets rock echoed up the sheer faces. Somehow it seemed to move me. It told of times past, stories drifted up the basalt cliffs of shipwrecks and unknown craft fl oating by, aided by the rain cloud that moved towards me from the east, adding to the atmosphere as the brigantine was now shrouded in drizzle, enveloped in a cloud of mystery as it disappeared from view like the Flying Dutchman. 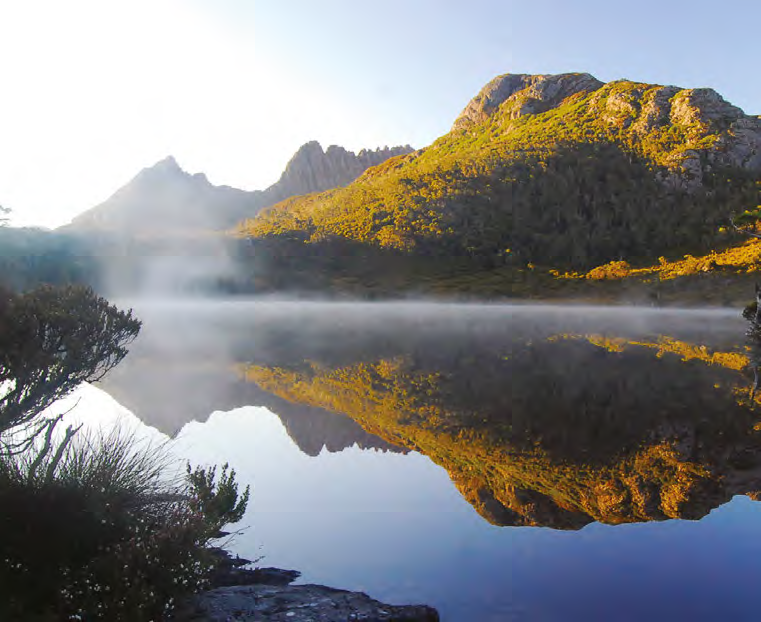 The kelp rose and fell with every swell, fl ashing gold in the waning sun, a band of white foam denoting the receding wave. The life of the ocean was the music I was hearing and its tones were mesmerising as I slowly devoured my sandwich.

The Cape Hauy walk has just had a multi-million dollar makeover with 2020 solid steps making it easier. Cape Hauy is one of a few such landmarks listed in the 60 Great Short Walks, one of the finest tourism prompters I’ve seen anywhere. My take is that not only does it get me to some places I’ve never been, it encourages all tourists to make an effort to really see some of things that Tasmania has to offer other than those that are flogged to death by those with vested interests elsewhere. This is the everyman’s guide to seeing much of the best that Tasmania has to offer; so far I’ve managed around 40 or so and figured perhaps it’s time to share some of my experiences. 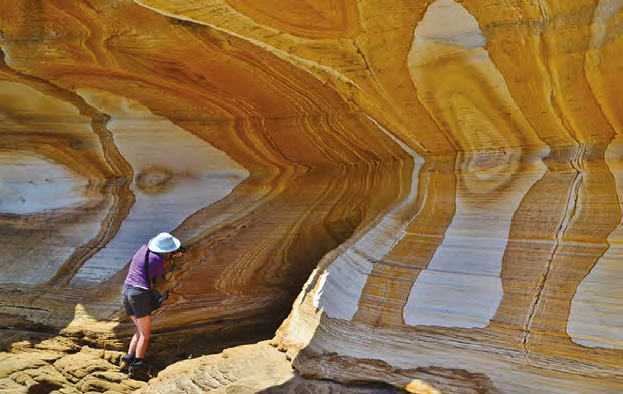 Cape Hauy, it’s fair to suggest, is not for the acrophobic or unfit. At the end the sheer cliffs are breathtaking but you have to negotiate 2020 stairs – each way! It’s listed as a four-hour walk but old farts with cameras like me should allow 5.5, although we got back just under that from our base at the beautiful Fortescue Bay. I suspect that if it wasn’t for a dirt road in and lack of publicity, it would be more popular than Wineglass Bay. At least you can swim in it, although the water is a tad chilly. 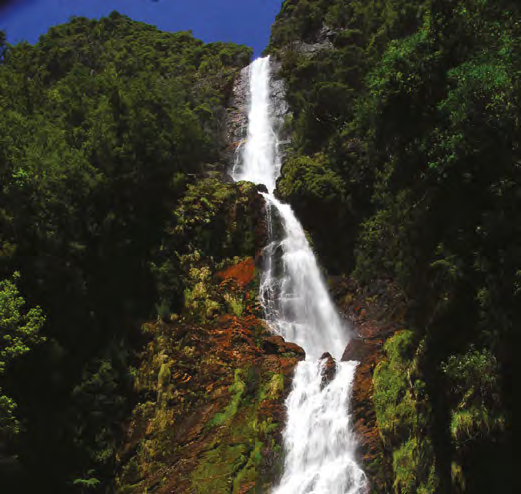 Montezuma Falls is another worth consideration

Other fabulous cliff walks are Cape Raoul (the first I ever did), Fluted Cape walk, on South Bruny, and the dramatic Waterfall Bay near Eaglehawk Neck. They have varying degrees of difficulty.

For something far easier, the ever popular Russell Falls is worth a look, just a 10-minute stroll up a bitumen path will get you to one of Tasmania’s finest. However, might I suggest going on a bit further in Mount Field National Park. 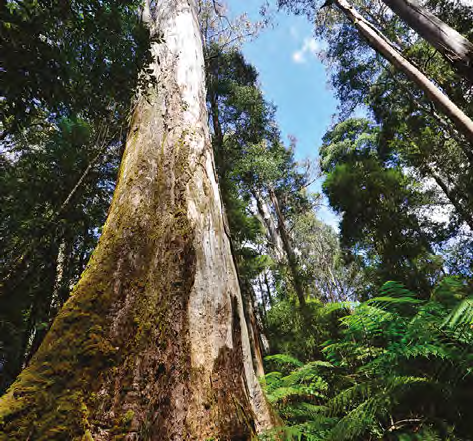 Immediately above the multi-tiered Russell is Horseshoe Falls; a short distance further the Tall Trees walk and, if you’re still keen, why not go all the way to Lady Barron Falls. The whole walk in total is only 2.5 hours return and, apart from two sets of steps, is an easy stroll through some inspiring forest with thousands of ferns.

If you’re really into falls, then another easy one is Liffey Falls. Much photographed and lauded, you can see the whole set of cascades in well under an hour without any hard walking at all.

Over in the west, Nelson and Hogarth falls (Strahan) are even easier walks with well-made level tracks into both and delightful pictures to be had when you’re there.

For the tallest you should aim for St. Columba Falls or Montezuma, at opposite sides of the island. Both are tiered falls and not just straight drops. The short walk into St. Columba is a delight and crosses a beguiling stream just before the lookout  while Montezuma (on the west coast) follows the old North East Dundas Tramway and you’ll pass some old mine workings en route. The swinging bridge where the best sight of the falls is obtained may deter the acrophobic.

I remember another occasion, walking along a national park track and there, right beside me, was nature doing its thing. A copperhead was devouring a native toad, the latter with its legs akimbo as its last rites were being read. I managed, carefully using my tripod in a manner totally unintended by the manufacturer I’m sure, to manoeuvre the snake into a better position for a pic. He obliged in a somewhat recalcitrant manner for what is one of my all time favourite snaps.

The fact that this stroll was beside a swamp made this encounter not all that surprising. When I took Lorraine on the Springlawn Nature Walk another time we went all the way to Archers Knob in Narawntapu, prompted as Australia’s answer to the Serengeti, but no snakes did we see, just panoramas over the estuaries, Bass Strait, a wombat and lots of potoroos, the latter so tame you could get really close before they scarpered off into the brush.

If you really want to see a snake (yes, I know it’s not the top of everyone’s list), the raised boardwalk at Tamar Island offers a good chance as you look down at the swamp and watch them try to snare the numerous frogs before you stroll over to the island itself.

Just about the whole world knows about Dove Lake at Cradle Mountain; it’s most peoples’ fi rst experience of this natural wonder. However, might I suggest that if you have the energy, a much better option is the Crater Lake Circuit. For this you get four lakes instead of one. Although the walk includes one end of Dove Lake, it also includes Lake Lilla, Wombat Pool (look for the million tadpoles) and picturesque Crater Lake itself. This 5.7km loop (you catch a free bus back to your car) is mostly on well-made track and boardwalk though steps are involved. 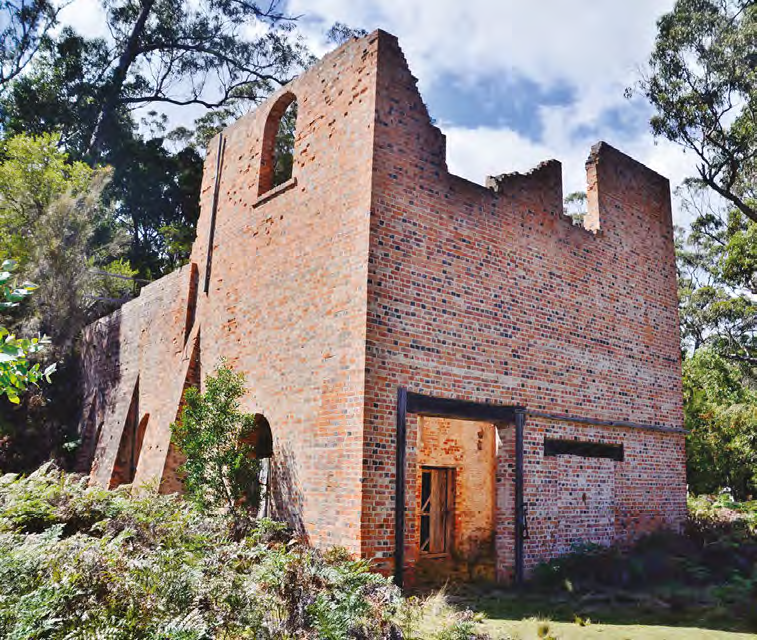 Wineglass Bay is on most people’s list but so many I’ve come in contact with just don’t realise how difficult the track is. Part of the ascent is 1.3km up a steep rutted track, at times with unsure footing, all to see a beach you can’t swim or fish from.

To see great views without any effort you could drive nearby to Cape Tourville. Here is a wheelchair-friendly 10-minute stroll to a lighthouse with expansive views up and down the coast. Just down the road also is the more close up Sleepy Bay, a small alcove riddled with photographic possibilities such as orange lichen on the rocks.

If it’s gorges that float your boat then consider Leven Canyon. The walk that the NPWS put in is excellent to say the least and offers safe but spectacular views over the 275-metre drop at selected viewing points, one of which hangs over the canyon. The 697 steps on the linking trail are numbered in certain places so you know just how far you have to go, though the whole walk is only 1.2km. You can go further and cross the bridge at the start of the multi-day hike for even more dramatic views.

Another canyon on the list is the Alum Cliffs, out from the rose village of Chudleigh. An easier walk but, for mine, nowhere near as good as Leven.

To view the world’s greatest hardwood trees in situ then you should head off to Tahune, out of Geeveston. Here there’s an airwalk with a small cantilevered section. Many take the walk, only about a third venture out onto the suspended wood. Trouble is, it moves slightly and many  find this disconcerting while for others – my hand is up – it’s exciting.

Should you prefer to view your trees from the ground up then Evercreech Nature Reserve is excellent. An enchanting picnic area set by a watercourse laden with foxglove is just the starter; the world’s tallest (three over 90 metres high) white gums, saved by a caring forester after the sawyers couldn’t get transport in. Botanists were sceptical initially and had to collect seeds by firing a shotgun up at the branches. The only drawback here is that it’s a dirt road in.

For a totally different tree walk the enchanting Pandani Grove at Mount Field takes less than an hour but it’s like is something you won’t see anywhere else as you circle a tarn while brushing past pandanus trees.

At Swansea, there’s an easy and poignant walk that you’ll never be able to pronounce. It’s Loon.tite.ter.mair. re.le.hoin.er which must qualify it for a Guinness Book of Records entry. At one end you’ll read the tale of the Large family and how all six children perished when the cutter Resolution foundered. Their graves are in the nearby cemetery.

Nothing beats Maria Island for history, though. Our visit was on a balmy day. Gentle ripples flecked the surface as the catamaran cruised over and we docked beside the old Commissariat Store, the only intact building beside the water and overlooking a pristine beach that greets you as you alight.

One of the original houses on Maria Island

Darlington is the name of the restored settlement that twice housed convicts but failed due to lack of discipline and these days is listed as World Heritage. You can overnight here (BYO blankets) and there are multi-day walks as well as those to the high points of the island.

However, we stuck to the historical attractions plus the famous Painted Cliffs, choosing a figure eight route that took us to the Fossil Cliffs first, where limestone was mined in the 1920s. The quantity of shells present in the rocks will amaze you, though, at first, you’ll be looking for white while the fossils are black.

You will traipse past the odd historic building here and there, notably the kilns and, later, the old Oast House subsequently converted to a winery by the Bernachi family who spent the late 19th century here and built the Coffee Palace, the most significant building on the island these days.

When we arrived at the Painted Cliffs, Lorraine and I, being artists, immediately fell in love with the place, though it’s only about 50 metres long. So many shapes sculpted by nature our cameras clicked crazily before we headed back along the idyllic Hopground Beach.

Why don’t you give some of them a go? 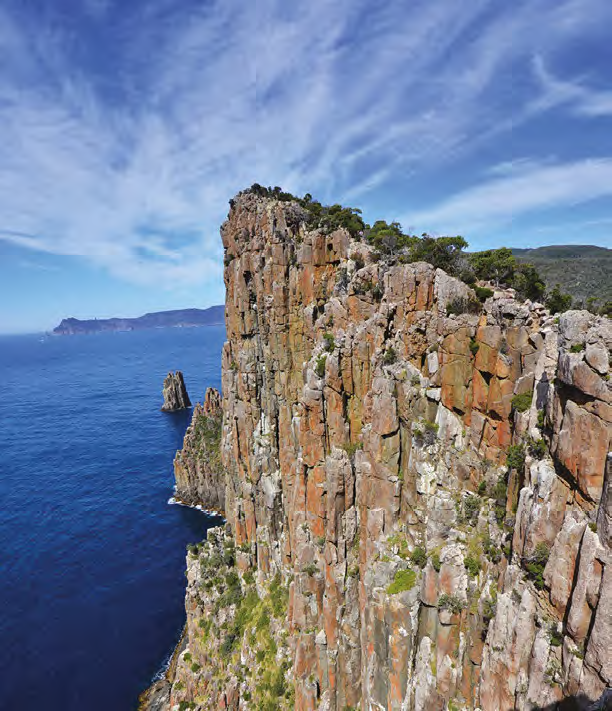